By Amy Lamare on April 5, 2015 in Articles › Entertainment

Millionaires come from different industries and make their money in different ways. Not many start out as high school dropouts who live in an old fire engine, but that is just how Dale Vince, the CEO of Ecotricity, England's biggest green energy supplier, got his start. Through his environmental activism, Vince found a way to create a makeshift turbine to generate energy for his travelling home on wheels. That turbine was the first step in Vince's journey from fire engine dwelling hippie to head of a massive green energy empire with more than 155,000 customers. From penniless New Age traveler to multimillionaire corporate executive pioneering cleaner and more sustainable energy–it is quite a large leap and this is his wild life story.

Dale Vince was born on August 29th, 1961, in Great Yarmouth, Norfolk, England. There isn't a lot known about Vince's childhood other than that he dropped out of school in 1976 at 15 to be a part of a "Peace Convoy" of hippies. In 1981, Vince met and married Kathleen Wyatt. He was 19; she was 21 and had a child from a previous relationship. Like Vince, Wyatt was a New Age traveler. They were penniless and lived off state benefits as they wandered the country with their commune of hippies. Their son Dane was born in 1983. Vince and Wyatt separated several years later. Wyatt raised Dane on her own while Vince drove to Spain with his new girlfriend in a 30-year-old fire engine. Vince and Wyatt divorced in 1992. 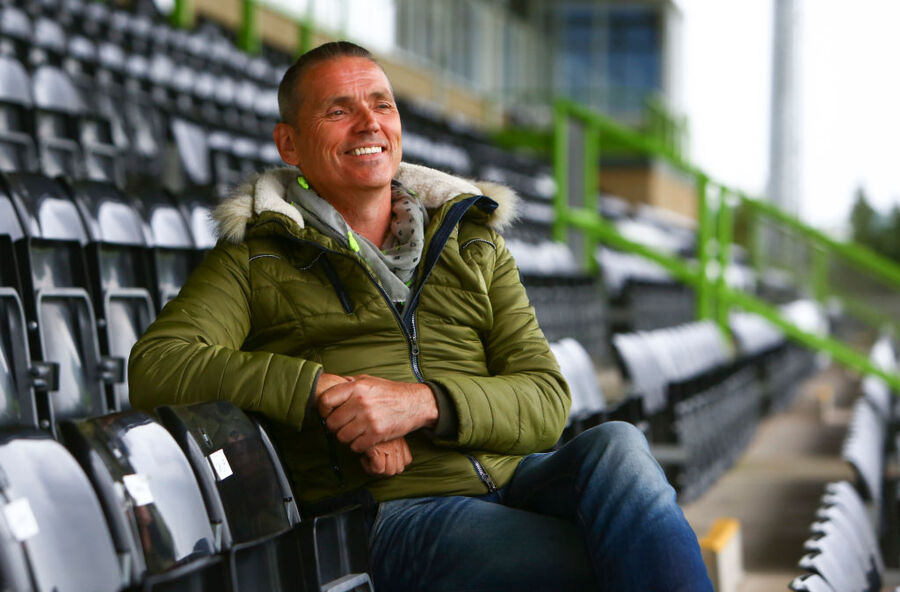 Vince traded in the fire engine for an old ambulance which he powered with a home-made wind turbine that he made from recycled materials. This was the moment that gave him the inspiration for his future company. In 1994 Vince took his wind turbine to the Glastonbury festival in England by charging mobile phone batteries with a windmill affixed to a pylon.

The success of this led Vince to securing a bank loan large enough to launch his wind turbine business, Ecotricity, in 1996. Initially he set up a wind turbine on the top of a hill in the Cotswolds. The turbine generated not only a ton of power, but also quite a substantial income for the former penniless New Age traveler.

As of 2015, Ecotricity has 155,000 customers. That is double the number of customers the company had in 2014. Brits are seeking a green alternative to traditional energy companies in larger and larger numbers. Dale Vince's net worth is $160 million and his company is worth $85 million. Vince drives a sports car and lives in a $6 million, 18th century castle with his new wife and their two children. His son with Wyatt, Dane, now works for Ecotricity.

Vince uses his wealth to back green initiatives and politicians who are likeminded. He is backing the re-election of Caroline Lucas, the UK's only Green MP. In 2004, Vince received an OBE from the Queen for his services to the environment. Vince also maintains a strict vegan diet.

In 2010, Vince became a major shareholder of Forest Green Rovers, FC, the football club that plays in the Conference Premier League. He is the club's chairman and he famously banned red meat at their stadium. He also installed an organic football pitch. The club maintains it with a solar powered lawnmower and avoids the use of chemicals.

Vince is also famous for his legal battles.

In 2011, his ex-wife Kathleen Wyatt resurfaced and filed a $2.8 million lawsuit against Vince nearly 20 years after their divorce. She claimed she had suffered 16 years of real hardship raising his kids without his help. The Court of Appeal in England rejected the claim and called the case an abuse of the legal process.

Vince moved on and Ecotricity teamed up with Elon Musk's U.S. based electric car firm Tesla. The two companies teamed up to build a new British highway for electric cars. Ecotricity had already built battery chargers for the proposed project and Tesla was looking to expand its market for the luxury electric vehicles to England.

However, that deal went south in May 2014, when someone allegedly accidentally sent an internal Tesla email to Ecotricity. The email supposedly contained details that Tesla was going to encourage the highway service stations to break their contracts with Ecotricity. The emails also indicated that Tesla was sending two American executives over to intentionally damage Vince's company's name.

Vince took to the press, calling the Tesla betrayal a "declaration of war." Ecotricity took legal action against Tesla's "smash-and-grab" raid, accusing Tesla of stealing the intellectual property of Ecotricity.

This was not the end of Vince's legal troubles. In March 2013, his ex-wife filed another lawsuit against him. However, this time the Supreme Court ruled that there was "no time limit" for claims for financial provision for ex-spouses. Vince is paying the legal cost for both himself and Wyatt that amount to nearly $750,000. English law forces legal costs to be shared amongst the combined wealth of the parties in the lawsuit. Wyatt is penniless.

Wyatt lives in a council house—the English version of what in America we might call the projects. She lives with her unemployed 21-year-old son Robin, her 18-year-old jobless daughter Jessie, Jessie's unemployed baby daddy, and their three-month-old daughter. Wyatt's oldest daughter, Emily, is in prison.

Vince did not come up with the idea for Ecotricity until four years AFTER he and Wyatt divorced. Yet now his fortune is on the line because his ex-wife failed to make anything of her own life and has come looking for what she feels is owed to her. Never mind that Vince and Wyatt had one son together, Dane, and that Dane does work for Ecotricity.

For now, Vince will have to wait for the English courts to rule on Wyatt's claims.