The Curse Of The 752 Pound Emerald

By Amy Lamare on January 16, 2018 in Articles › Entertainment

In a vault at the Los Angeles County Sheriff's Department there is an enormous emerald weighing 752 pounds and valued at as much as $925 million. It has no rightful owner currently, but over time nine men, one woman, three corporations, and one government have laid claim to the giant emerald. It is called the Bahia Emerald and it has had quite an interesting journey to that evidence vault in Los Angeles. The cast of characters who have become enthralled with this giant, fairly ugly stone are pretty strange and random as well.

Emeralds are a bit mysterious. Unlike diamonds, their price isn't regulated. Basically an emerald is worth exactly as much as a person is willing to pay. The various parties vying for the right to sell the Bahia emerald set the $925 million price tag based on a fallacy. The truth is, the emerald could be worth as little as $1. Or, it could be worth $75 million. Or $925 million. Or $65. It is worth, as I said, exactly what someone is willing to pay.

The Bahia emerald's story began 17 years ago, in 2001, when it was unearthed from a mine in Brazil. The story goes that the team of mules pulling the emerald through Brazil's dense rain forest was attacked by panthers and the miners had to carry the 752 pound emerald from the mine to town. No one knows if this story is true or not, but there doesn't seem to be much reason not to believe it. Once the emerald was back in town, it was delivered to Sao Paulo via a truck. It was housed in the carport of one of the mine owners, protected by a tarp. The mine owners intended to get in touch with a friend named Ken Conetto in San Jose, California. 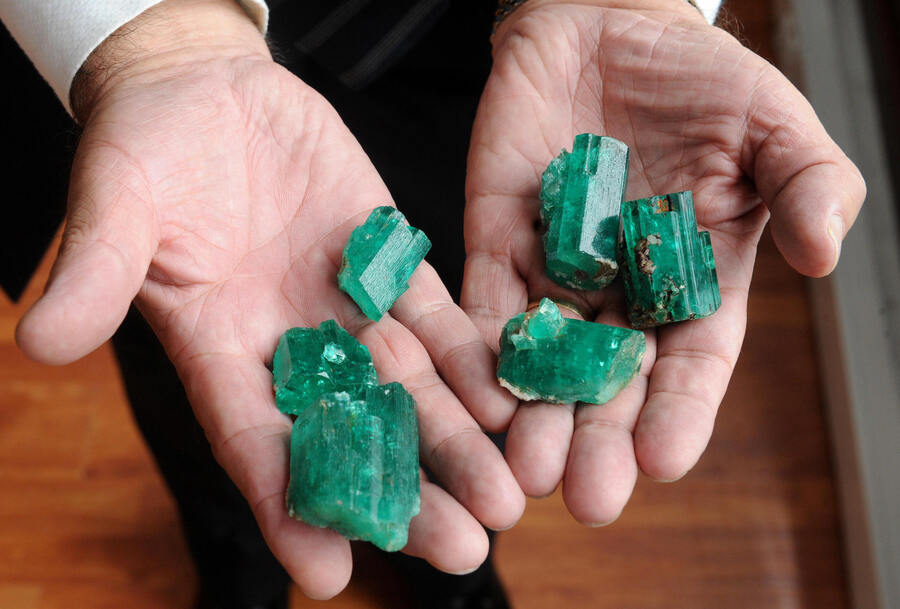 Back in the early 2000s, during the heyday of the first internet boom, Conetto had become acquainted with Tony Thomas. Thomas had invested a considerable amount of money into a startup that needed even more money invested if Thomas was ever going to get his money back. Conetto had a plan for Thomas. The two of them would fly to Brazil and through Conetto's mine owner connection, secure $25 million in emeralds. Of course, Conetto and Thomas would not be paying anything near $25 million for those emeralds. They would use the emeralds as collateral on a loan – giving Thomas not just the money his startup needed to stay in business, but also enough money to make him a wealthy man.

Thomas and Conetto flew to Brazil in September 2001 and Conetto's miner friends set up a meeting to look at cut, polished, salable emeralds worth $25 million. The meeting did not go as planned, so the miners sweetened the deal by taking Conetto and Thomas to see the 752 pound Bahia emerald that was still covered by a tarp in the mine owner's carport. Thomas immediately fell into the emerald's spell and he had to have it. The miners offered it to him for $60,000.

Thomas flew home to the Bay Area and wired the money for the emerald to Sao Paulo. While he waited for the arrival of his precious emerald he did some research on its value and stumbled across some good news. There was a comparable emerald of a slightly smaller size in the British Museum. It had been valued at $792 million. Thomas passed that info along to a gem appraiser he knew in Brazil. That appraiser then assigned an estimated value of $925 million to the stone.

Conetto told Thomas he would ship the stone to him in California. Needless to say, the emerald never arrived or we wouldn't have a story to tell. A few months later Thomas asked Conetto to go back to Brazil to find out what happened. Conetto did and told him the emerald had been stolen on the way to California. At least, that's Thomas' side of the story. Conetto claimed that Thomas never bought the emerald and he never agreed to ship it to California for him.

For four years, Conetto and the miners tried to inflate the stone's value and take out loans against its insurance. Then, in 2005, Conetto sent the emerald to California. He had made a deal with a man from the Los Angeles suburb of Temple City named Larry Biegler. Biegler had also instantly fallen into the emerald's spell and was sure he could sell it to some rich sucker. Biegler got Conetto to sign over the rights to sell the emerald. If he was able to sell it, the two would split the money 50/50.

Once Biegler was in control of the emerald, he contacted a gem merchant in New York City and offered him 10% of the sale price if he could get at least $25 million for the emerald. The gem merchant placed the emerald on eBay with a minimum bid of $19 million and a Buy It Now price of $75 million. It got one bid for $19 million but Biegler didn't want to sell it for that low of a sum.

Biegler then got a call from a man named Jerry Ferrara. Ferrara was selling foreclosed properties. It was November 2007. The two men got to talking and Biegler asked him if he wanted to help him sell a giant emerald. Ferrara, like so many before him, fell instantly in love with the stone. Ferrara claims that Biegler signed ownership of the emerald over to him. Then Biegler got Ferrara involved in selling diamonds to a man from Idaho named Kit Morrison. Morrison supposedly sent Ferrara $1.3 million for the diamonds. Ferrara put the emerald up as collateral. Of course, Ferrara didn't have any diamonds, so the emerald ended up in Kit Morrison's hands.

The emerald was being stored in a storage unit in the Los Angeles suburbs. Biegler, Ferrara, and Morrison were the only people who had access to the emerald. All three were trying to sell it and escorted rich people with interest to the storage unit to see the emerald.

Then, in June 2008, Biegler went missing. He claimed to have been kidnapped by the Brazilian mafia. Ferrara got a plea from Biegler to pay his ransom. Ferrara finally saw the light and realized that Biegler was a scam artist. In actuality, Biegler was a plumber from Citrus Heights, California. Ferrera talked the manager of the storage unit into letting him and Morrison remove the emerald without Biegler knowing. The two men put the emerald in an SUV and drove to Las Vegas. Less than 24-hours Biegler discovered the emerald was missing and called the police.

Biegler told the police that he'd been kidnapped and released by the Brazilian Mafia and his emerald had been stolen. He told them about Ferrara and Morrison. By mid-December 2008, the police found the two men in Las Vegas, where Morrison cut a deal with the police to turn the emerald over to the police as long as neither he nor Ferrara were arrested. The police seized the emerald, put it into the evidence vault, and it has sat there ever since.

Over the past decade, four separate lawsuits have been filed in regards to the Bahia emerald.  Nine men, one woman, three corporations, and the government of Brazil have all claimed to own the emerald. Three of those people ended up filing for bankruptcy.

From 2007 to 2015, legal battles waged. Conetto sued Morrison. Thomas sued Conetto. The gem merchant in New York City sued Biegler. The courts tended to believe the emerald rightfully belonged to Thomas. After all, he was the only person involved who ever paid anything for the emerald. However, when the court found that he never called FedEx to see what happened to his package and when he claimed his bill of sale was destroyed in a 2006 house fire, the court began to doubt him. Oh, and then it also happened that the large emerald at the British Museum that he based his valuation on was a made up story. There was no $792 million emerald at the British Museum.

The judge rejected Thomas' claim that he owned the emerald. The courts granted Thomas a mistrial. In 2013, the second trial started, but by that time Ferrara and Morrison had teamed up to form a consortium called FM Holdings. The court awarded the emerald to FM Holdings in June 2015. It was finally over…except, before the Los Angeles Sheriff's Department got the paperwork to release the emerald, they received an injunction from the District Court of Washington D.C. filed by the Department of Justice for the government of Brazil. Brazil claims that the emerald was removed from their country illegally and it belongs to them.

The Bahia Emerald started in the Brazilian state of Bahia, was shipped to San Jose, California, New Orleans, South El Monte, California; and Las Vegas. The emerald has been the subject of several failed business deals, disillusioned partnerships, and broken promises. In 2005, the emerald was in New Orleans during Hurricane Katrina and submerged under flood waters.

Today, that 752 pound emerald still sits in the Los Angeles Sheriff's Department's vault. It is now evidence for the criminal case they are working on.

Thank you to Wired for the excellent, in depth reporting on this article, which piqued our interest and inspired this piece.