Contrary To What Every Politician Predicted, Eminem Turned Out To Be A Pretty Amazing Human Being

By Brian Warner on October 25, 2020 in Articles › Entertainment

In the late 90s and early 2000s, no one struck fear into the hearts of parents, preachers and politicians quite like Eminem. Bill O'Reilly, Jerry Falwell, Lynne Cheney and even President George W. Bush took every opportunity to rail against Eminem's violent lyrics, controversial stage antics, and general perceived-depravity. Parents were convinced that Eminem was the spawn of Satan sent on a mission to corrupt the youth of America. One politician literally called him the most dangerous threat to the American child since polio. Other words to describe Marshall Mathers back in the late 90s likely included "evil", "perverted", "deviant", "immoral", "careless", and "delinquent." Fast forward a little more than a decade, and now you'd probably hear words like "generous", "responsible", "humble", "entrepreneurial", "exemplary" and "patriotic." Don't believe me? Here are five examples that demonstrate Eminem is a pretty amazing human being…

When Eminem had his six-year-old daughter Hailie sing vocals in his song "My Dad's Gone Crazy," Bill O'Reilly called it child abuse. Bill actually thought it was grounds to call Child Protective Services. Yet through it all, Eminem has by all accounts, been an absolutely terrific father. The kind of father Bill probably would have hung out with at PTA events. And speaking of school events, Mr. Mathers attended pretty much every major school function that involved Hailie when he was on tour. Not that anyone would have noticed. When Eminem attended a school event, he always made a point to stay out of the spotlight and make a low-key entrance so he wouldn't take away from his daughter and her fellow students' time to shine.

In 2012, a Michigan youth charity called Wolverine Human Services received an anonymous $200,000 donation. Wolverine Human Services helps at-risk youth ages 12-18, from 54 different Michigan counties. A year earlier, the charity received a similarly-mysterious $100,000 donation. With a little bit of digging, someone figured out that Eminem was behind both gifts. Once he was "outed" as the anonymous donor, Eminem took to social media to drum up even more support. He also pledged to match whatever amount was raised. His fans ended up raising $72,000. So Em cut ANOTHER check to the program for $144,000. With his support, more than 1,600 children have received presents during the holiday seasons in the last few years. Countless more children have been helped by the program's ongoing services.

Eminem is also actively promoting his own charity, the Marshall Mathers Foundation. Perhaps fueled by helping kids avoid a rocky childhood similar to the one he experienced himself, the MMF has made donations to food banks throughout Detroit and has participated in fundraisers with organizations like Eight Mile Boulevard Association, the Small Steps Program, and ninemillion.org. 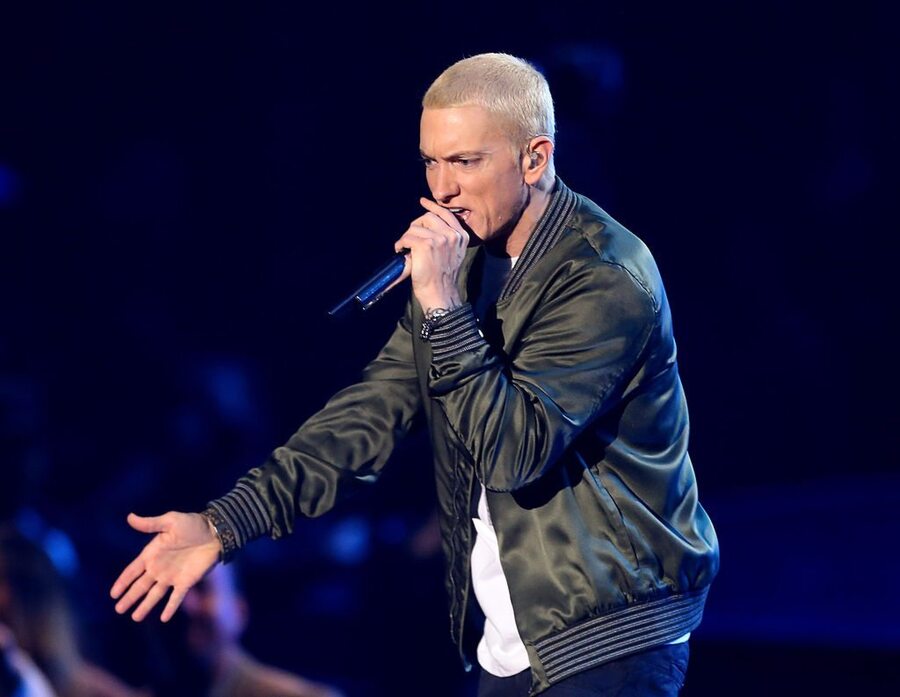 Most celebrities who come from a struggling city like Detroit move to a sunny city like Los Angeles as soon as their first big check clears, and they never look back. Not Marshall. Eminem has actually turned out to be one of Detroit's biggest supporters. He still lives locally in this house that was built by the former CEO of Kmart. But staying local is just the beginning of how Eminem has helped boost Detroit over the years.

Back in 2011, an ambitious Chrysler executive had a crazy idea. He wanted to use Eminem's Academy Award winning song "Lose Yourself" as background music for a Super Bowl commercial advertising the brand new Chrysler 200. The reason this was a crazy idea was because up until that point, Eminem had steadfastly refused to license his song for any commercial endeavor. He had been approached more than one hundred times to license the song for products and turned them all down. Steve Jobs himself even asked to use "Lose Yourself" as the official track for Apple products. But every time a company came calling, Eminem declined, giving up millions of dollars in the process. For Em, the song was just too personal to sell out.

With the Super Bowl just a few weeks away, the daring Chrysler executive managed to arrange a sit-down with the co-writer of "Lose Yourself," Joel Martin. He showed off the car that would be featured in the Super Bowl commercial and Joel was quite impressed. He was so impressed, in fact, he whipped out his phone and called Eminem on the spot. Em invited Joel and the Chrysler executive over to his house, just a 20-minute drive away.

After taking the Chrysler 200 for a test, Eminem was impressed. He was blown away at how luxurious the car felt while still maintaining an affordable sticker price. More importantly, Eminem was really happy to know that each and every Chrysler 200 sold in the world would be hand-built by Americans working at a plant just down the road in the Detroit suburb of Sterling Heights. When all was said and done, Eminem and Joel Martin agreed to license the song. They even gave Chrysler a 20% discount on the standard license fee.

And as if all that wasn't amazing enough, Eminem also offered to appear in the Super Bowl commercial FOR FREE!

This was just one of many examples of how Eminem has supported Detroit. Another awesome story involves the 2013 movie Elysium. Way before Matt Damon signed on, Em was approached by producers to star in the movie. He was surprisingly open to the idea, but he did have one condition: he would agree to star in the movie only if producers would film the entire project in Detroit, using local workers. When the producers declined, Eminem walked away.

I'll keep this paragraph simple. As of this writing, Eminem is worth $230 million. He owns an extremely successful clothing line and record label. On average, he earns $20-25 million every year.

In 2015, a 17-year-old Michigan teen named Gage Garmo was diagnosed with a rare and aggressive case of terminal bone cancer. Prior to the diagnosis, Gage was a regular, healthy kid who played sports and video games. But more than anything, he idolized Eminem. And as it happened, Eminem lived in the same city as Gage, Rochester Hills, yet Gage had never caught a glimpse of his idol in real life.

Gage's health began to spiral rapidly and doctors gave him less than a month to live. With this horrible news, his friends and family sprang into action to pull off a miracle. Their goal was to get Gage a chance to meet his idol, Eminem. They launched a GoFundMe page and a hashtag #GetGageToMeetEminem that hundreds of kids tweeted at Eminem's various official social media accounts. They soon caught the attention of a Michigan-based charity called The Rainbow Connection, that helps grant wishes to terminally ill kids.

With the help of The Rainbow Connection, Gage's family actually got in touch with Eminem's people. A few days later, on a Sunday night at around 8pm, without any fanfare or media attention, Marshall Mathers pulled up into the family's driveway and rang the doorbell.

Gage and Eminem sat together in the family living room talking about hip hop and football for OVER AN HOUR. The entire time, Gage beamed with happiness. It was the first time his family had seen him smile that big in a very long time. Before he left, Em posed for photos and signed some autographs. He didn't bring a camera crew. He didn't discuss their meeting publicly. Em did everything under the radar, and out of the goodness of his heart.

Tragically, less than 24 hours after meeting with his idol, Gage lost his battle with cancer. He was five days short of his 18th birthday. It was completely heartbreaking, and it is making me tear up right now. But all I can say is that hopefully, the Garmo family found some comfort in the fact that Gage spent his final moments on the planet in the company of his lifetime idol, with a huge smile on his face.