How Much Money Did Colonel Sanders Make Off Kentucky Fried Chicken? Not As Much As You'd Guess!

By Amy Lamare on August 31, 2018 in Articles › Entertainment

Kentucky Fried Chicken. KFC. Fried goodness. Mashed potatoes and gravy. The biscuits. For many people, KFC is comfort food. For the man that started it all, it was his passion. Harlan Sanders's path to becoming the man known for fried chicken was an unlikely one. He simply found that he could sell fried chicken like crazy. From a simple gas station outlet to more than 4,400 fried chicken restaurants across the United States: This is the story how a sixth grade dropout came to be known as Colonel Sanders.

A full generation of people today know Colonel Sanders as only the face of a brand, but there was a time not all that long ago, when he was a living, breathing, walking, talking spokesperson in television commercials for Kentucky Fried Chicken. By all accounts Harland Sanders was a foul-mouthed, hot-tempered man who was quick to take his ever present cane to those who did not fry his famous chicken quite to his liking.

Sanders' meandering route to the business that would make him wealthy was characterized by the rapidly changing times that he lived in. Sanders worked a myriad of jobs from railroads to tire sales to a ferry service. He was a lawyer, an amateur obstetrician, and he sold gas lamps to farmers. It wasn't until he opened a gas station that expanded into a roadside motel and restaurant in Corbin, Kentucky in the 1930s that he found his way and laid the groundwork for his finger licking good fried chicken empire.

Harlan Sanders was born on September 9, 1890 on a farm in Henryville, Indiana. It was the turn of the century and at that time only a small percentage of Americans made it all the way through high school. Even President Grover Cleveland was a drop out – he left school at the age of 16. When Sanders was five years old, his father died suddenly and Harlan then had to help his mother provide for their family, which included two younger siblings. He dropped out of school in the sixth grade so that he could get a job.

Sanders's mother eventually remarried and Harlan did not have a good relationship with his step-father. As a result, he left home when he was 12. Four years later, in 1906, 16-year-old Sanders lied about his age and joined the Army. He was sent to Cuba, but discharged four months later. Obviously, with such a short time in the service, Sanders never attained the rank of Colonel. That was bestowed on him in 1935 by Kentucky Governor Ruby Laffoon, who gave the rank of Colonel to Sanders in recognition for his charity work and the contributions his chicken made to the state's cuisine.

Long before he became famous for his chicken, however, Sanders held a number of jobs – not always successfully. According to books about him, Sanders was a foul mouthed, scrappy, hot tempered man who, despite being hardworking, often found himself at odds with his employers. Over the years, Sanders was a farmhand, an army-mule tender, a fireman for locomotives, a railroad worker, an attorney (at a time when lawyers did not have to be admitted to the Bar), an insurance salesman, a ferry boat operator, a tire salesman, an amateur obstetrician, a political candidate, a gas station operator, and a motel operator. What Sanders lacked in focus, he made up for in drive and ambition. 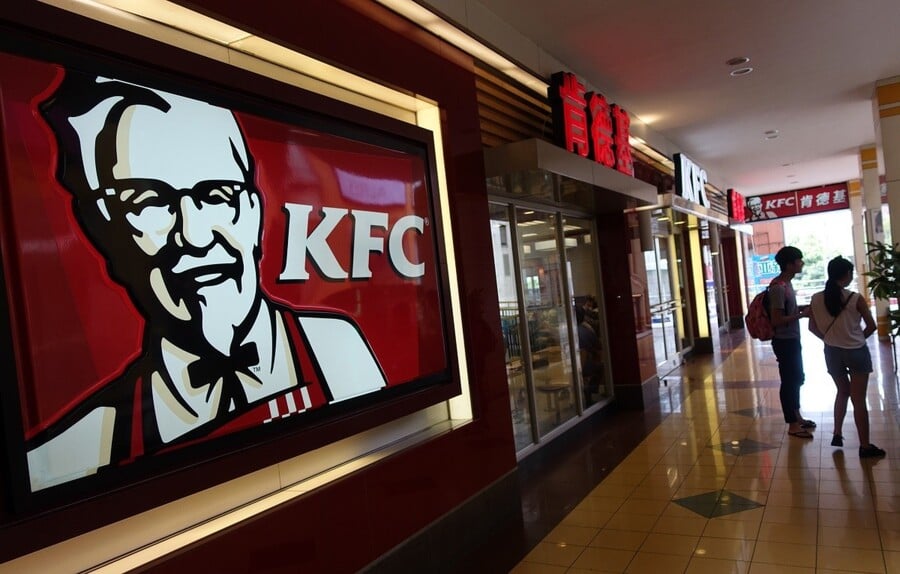 However, the recurring theme throughout his life was that he had a tough time holding down a job for any length of time. He was often fired for getting into fist fights on the job. And while he was always able to support his family, his constant firings wore on his wife Josephine. She took their kids and left him for a while, because Sanders could not stay employed for any significant amount of time. He was fired from the railroad, fired from being an attorney after he got into a fist fight with his own client in court in front of the judge, and fired from being an insurance salesman. He started an acetylene lightning company just as electricity was becoming more available and thus failed at that. He was successful as a tire salesman, but that career also ended when he wrecked his car and could not afford another one. He opened a Standard Oil gas station in 1927, but that was wiped out by the Great Depression.

Sanders did not have an easy run of it in his career.

In 1930 Sanders, started another gas station in Corbin, Kentucky. He decided to serve some food from a small table in the station to make more money. This was the seed from which Kentucky Fried Chicken grew. At the same time, Sanders started his business as an amateur obstetrician. At the time, many Corbin area workers were a part of President Roosevelt's Works Progress Administration – a plan designed as part of the New Deal to get Americans back to work after the Depression. Sanders realized that many of the men had pregnant wives, but no money to pay a doctor. He kept a bucket with scissors, gauze, and Vaseline handy so that when he got a call, he could dash off to deliver a baby.

Meanwhile, Sanders expanded his service station and small kitchen into a motel and legitimate restaurant. Known as Sanders Court and Café, the restaurant sold fried chicken, steak, ham, and biscuits.

Sanders's run of bad luck wasn't over. On Thanksgiving Day 1939, his restaurant burnt down. Sanders rebuilt the restaurant into a 140-seat establishment. This was also where he would begin to pressure fry his chicken, a method he would later patent. Sanders was approaching retirement age and another obstacle was thrown in his path that threatened to put him out of business.

The highway that was being constructed would re-route traffic away from Sanders' restaurant. The café was now 20 years old and had regular business. In 1956, Harlan Sanders auctioned off his restaurant for $75,000 ($658,009 inflation adjusted). This money paid off his taxes and outstanding bills. Harlan Sanders was 65 years old. 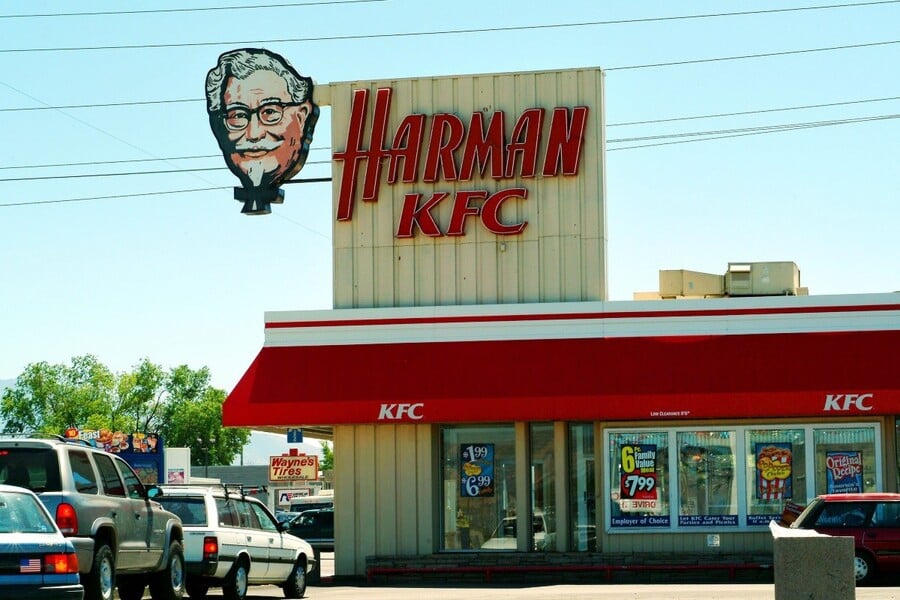 Sanders had his social security checks to live on and not much else. It was then that an idea struck him and the KFC that we know today began to take shape. Sanders was an early pioneer of franchising. He had been experimenting with franchising even before he sold his restaurant. His first franchise was a successful operation in Louisville. But as he faced a retirement without enough money, he made franchising his focal point.

Sanders began crisscrossing the country with his pressure cooker and bags of spices in his trunk. He often slept in his car. His mission was to sell his secret recipe for his fried chicken. He sold his original blend of spices to his franchisees and trained them to cook the chicken his specific way. He asked his franchisees to keep track of the number of chickens they sold and paid them a nickel for each one. As part of the franchising deal, Sanders also stocked kitchen equipment, which he sold to the restaurants at wholesale prices. Each restaurant was required to have a sign in a prominent location that said:

Pete Harman, a franchisee in Salt Lake City, decided to make his restaurant fully dedicated to Sanders' fried chicken and named his place Kentucky Fried Chicken. At this time, the focus also shifted to take out restaurants.

Sanders also supervised the level of quality provided by his franchisees. It was not unusual for him to take his cane to anyone he caught not doing everything up to his standards.

Even though Sanders sold the company, he wasn't ready to let go. Sanders came up with a theatrical persona of the Colonel to attract diners and franchisees. Sanders continued to keep his beard and wear the iconic white suit as the company's paid spokesperson and brand ambassador. Throughout the 1970s, Sanders appeared in television commercials for the company. Colonel Sanders became the most famous brand ambassador in the world.

However, relations with the corporation that ran Kentucky Fried Chicken grew tense when Sanders became unhappy with the direction it was taking. KFC's headquarters relocated to Tennessee for a while, they started charging a franchise fee, and moved from the five cents per chicken royalty to a percentage of sales. None of this sat well with Sanders.

So Sanders did what he knew best. He started over. Or at least he tried. He decided to open a sit-down restaurant called Colonel Sanders' Dinner House. However, the brass at KFC was not going to have any of that. The company argued that they had bought the rights to his name. Sanders renamed it Colonel's Lady's Dinner House and KFC insisted it had also bought the rights to Colonel. Sanders sued KFC for $122 million, alleging that the company was interfering with his ability to franchise his new restaurant. The company then countersued Sanders for violating KFC trademarks. They settled the case in 1975.

That wasn't the only lawsuit. A franchisee in Bowling Green, Kentucky sued Sanders for libel after the Colonel complained that the franchisee's gravy tasted like wallpaper paste. The court threw out that lawsuit in 1978. There's no word on whether the court tried the gravy and agreed with Sanders or not.

Despite the lawsuits, Sanders remained involved with KFC nearly right up until his death. In fact, he traveled to Japan on a promotional tour for KFC in 1979 when he was 89 years old.

Sanders lived modestly and donated much of his wealth to charities, including the Salvation Army. He did not leave his family with a large estate.

Harlan Sanders died on December 16, 1980. He was 90 years old. At the time of his death, he was worth $3.5 million ($10.1 million inflation adjusted). Perhaps not as much as you'd guess considering the fact that today KFC's annual revenue tops $23 BILLION. At least his name and face will live forever!