A Chinese Real Estate Billionaire Just Donated His Entire Fortune To Charity. Leaving His Kids With Precisely NOTHING.

You've got to admire anyone who goes from being dirt poor to self-made billionaire. BUT! As you are about to see, the story of Chinese real estate mogul Yu Pengnian is EXTRA worthy of admiration. From a penniless rickshaw driver to a real estate magnate in Hong Kong, this 88-year old has lived a full and rich life. He's built the kind of fortune most people can only daydream about. For better or worse, most billionaires set their family members up to live the easy life for generations to come. But not Yu Pengnian. Recently, Pengnian held a press conference to make a startling announcement. Yu Pengnian revealed to the world that he was giving away his entire $1.2 billion fortune. And not to his kids. Instead, he announced his intentions to give away the rest of his vast fortune to a foundation he established five years ago to provide aid to his favorite causes: Student scholarships, reconstruction after the 2008 Sichuan earthquake, and paying for operations for those like him who suffer from cataracts. His children will be receiving precisely NOTHING.

In a China that is becoming more and more materialistic every day, this act of altruism sent serious shockwaves through the culture. Questions over Mr. Yu's relative sanity surfaced. And yes, it would be very easy to chalk this huge donation to charity up to eccentricity, especially given Yu's personal habits. At 88-years old, he still dyes his hair jet black and wears it in a bouffant. He favors white Mao suits, which he wears with matching white shoes. Like Zappos' chief Tony Hsieh, Yu favors having his desk smack dab in the middle of the office.

However, Yu has historically been someone who chose not to display his wealth or live all that lavishly. He lives at the Penglin Hotel in Shenzhen, China, where he eats almost all of his meals at the hotel's buffet while sitting beneath a giant smiling portrait of himself. Yu Pengnian is one of the richest people in mainland China. He's topped the country's list of philanthropists for four years in a row — and it looks like he will do that again this year.

Mr. Yu has long said that his passion for charity is because he started out poor. He was born in a small village in the Hunan province in the southern portion of China. He moved to Shanghai as a young man in search of wealth. Instead, Yu found himself pulling rickshaws and selling trinkets on the streets. At one point, he was actually arrested on false charges (he was accused of being from a family of wealthy landlords which was apparently a crime???) and spent three years in one of China's "thought correction center" prisons.

He was 28 years old when he was released and he quickly moved to Hong Kong. He spoke no Cantonese or English. The first and only job he could land was as a janitor for a large real estate firm. He eventually landed an entry level job at the firm and slowly worked his way up the corporate ladder, impressing higher ups with his work ethic and dedication to learning and bettering himself.

By the 1960s, Yu found himself in a junior management position. He had also saved every cent he'd earned along the way so he got together with some friends and together they bought their first property. Over the years, Yu showed shrewdness for picking properties that would later escalate in value, often allowing him to sell for 20 or more times the initial investment. Many of his properties were hotels that catered to "by the hour" customers, earning him the nickname of the "Love Hotel King". Yu also bought the last house that beloved kung-fu star Bruce Lee lived in. Yu donated it back to the government of Hong Kong as a museum. 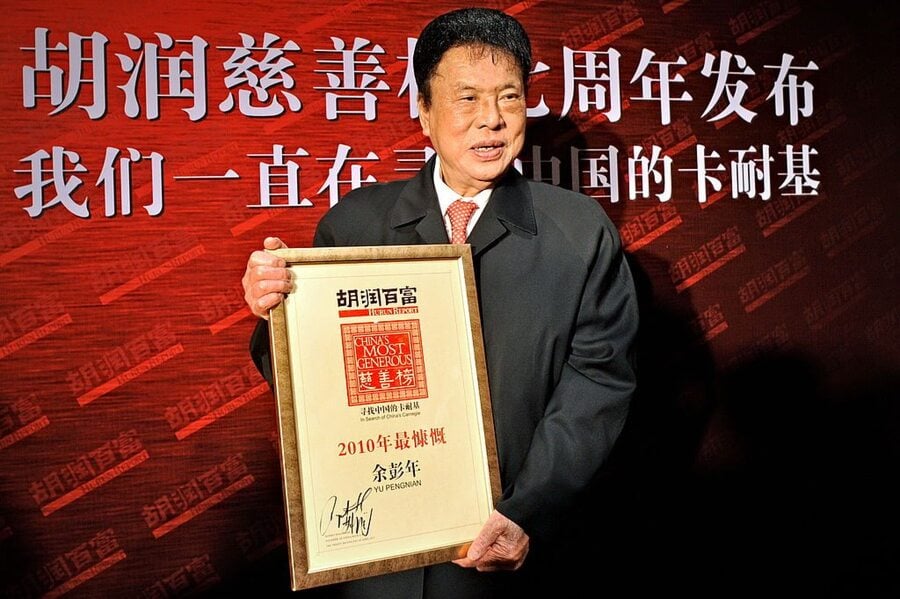 As his wealth and fame grew and Yu took trips back to his native Hunan province. He was struck with the poverty many still lived in. Each year he would return to his hometown of Lou de for their annual Spring Festival, handing out red envelopes filled with cash to the poor and the elderly. He learned a valuable lesson during those trips about how cash corrupts when he asked for help from local government officials. He asked them to help him stuff each envelope with money and found out later that the corrupt bureaucrats had pocketed much of the cash he had intended to go to the poor. Ever since that day, Yu has insisted that the money he donates go right to the recipients without first passing through any other charities or government agencies.

Mr. Yu dove into larger scale philanthropy after his cataract operation in 2000. When he was reading about the condition, he found out that many of the 400,000 Chinese people who develop cataracts each year could not afford the surgery that would allow them to see clearly again. This affected him deeply and he decided to put $10 million per year towards mobile cataract clinics that would travel to the most remote parts of China to do surgeries. His "Bright Eyes" vans, which bear an oversized image of himself, have performed more than 150,000 cataract surgeries across the country since 2003.

Lately Mr. Yu's charitable passion is education. He wants the bulk of his most recent donation to create educational scholarships. He said:

"Some of the money is for poor students, some is for talented students [who] I want to encourage, including foreign students who want to study in China. Education is very important for a country, very closely related to its prosperity and standard of living."

"This will be my last donation. I have nothing more to give away."

And with that statement his heirs – his children and grandchildren—finally knew for sure that they were not getting a red cent. With this donation, Mr. Yu also became the first Chinese national to give more than $1 billion to charity. In total he has donated nearly $1.3 billion in cash and real estate to the Yu Pengnian Foundation.

The nation of China was stunned and murmurs quickly began. People wanted to know how angry his children would be that he gave their inheritance away.

"They didn't oppose the idea, at least not in public. If my children are competent, they don't need my money. If they're not, leaving them a lot of money is only doing them harm."

And Mr. Yu's heirs cannot have any designs on any eventual inheritance as Yu appointed HSBC the trustee of his foundation and stipulated that none of the foundations holdings could be inherited, sold, or invested.

Mr. Yu wanted to set an example for other rich Chinese people. After all, capitalism is just 30 years old in China and charitable giving is an even younger concept to the country.

One person who understands Mr. Yu's decision to give all of his money away is his grandson, Dennis Pang. He is his grandfather's personal assistant, and while he admits that at first he was bewildered by Yu's insistence on giving everything he'd worked so hard for away, once he saw the good the foundation was doing and the immediate impact it could have, he understood. Mr. Yu's two sons, both in their 60s, sit on the foundation's board of directors.

Yu enjoys having his name mentioned alongside such famous philanthropists as Bill Gates and Li Ka-Shing, however, he likes to lightheartedly point out that he went a step further—he gave it all away. And while Yu is happy his family supports his decision, he admits that he would have given his fortune to his foundation with or without their support. "I don't care what others think. It makes me happy to give my money away. I used to be poor."