How Did A Children's Hospital In London End Up Making Millions Off Peter Pan?

By Brian Warner on November 13, 2013 in Articles › Entertainment

In 1929, a non-profit children's Hospital in London was facing dire financial straits. Founded in 1852, the Great Ormond Street Hospital, also known as GOSH, was the very first hospital in the English speaking world that provided children's sized beds to patients. In the nearly 80 years since it first opened its doors, GOSH had literally saved the lives of thousands, potentially tens of thousands of very sick children without ever accepting a dime in payment from their families. Supported entirely by donations, as the Great Depression loomed around the world in 1929, GOSH faced a potentially insurmountable budget crisis. There just wasn't enough money coming in from donations and their emergency bank accounts were dangerously depleted. Then, just as the hospital's board of director's seriously debated shutting their doors forever, a miracle happened. All of a sudden, an anonymous angel donated enough money to not only solve their short term budget issues, but enough money to keep the hospital thriving for years and decades to come. That angel turned out to be the celebrated children's author JM Barrie who is most famous for creating Peter Pan. JM Barrie's donations remained anonymous for roughly 8 years, until his death from pneumonia in 1937. Upon his death, GOSH was shocked to discover that their miracle was actually just getting started. Their miracle would even go on to involve the British Prime Minister, Parliament and an unprecedented amendment to UK copyright law, 50 years after JM Barrie's death. This story is amazing.

***Mark Kurlyandchik helped provide the foundation for this article.***

JM Barrie was born James Matthew Barrie on May 9, 1860, to a conservative Calvinist family in Scotland. His father, David Barrie, was a weaver and his mother, Margaret Ogilvy, assumed the household responsibilities of raising 10 children (two of whom died before Barrie was born). Barrie loved reading and making up stories of his own.

Famous for creating a boy who never grew up, Barrie's life experiences may have served as a great inspiration for the Peter Pan character. It is speculated that the 5ft 3 ½ in. Barrie may have experienced PSS, or psychosocial short stature, as a result of the death of his brother when he was just 6 years old. His mother, devastated by the loss of her favorite child, is said to have neglected her remaining children for a great deal of time afterwards. Barrie tried to cheer his mother up by wearing his brother's clothing and whistling the way he had. She was apparently comforted by the fact that her dead son would stay a boy forever, and never grow up to leave her. This theme is prevalent in a great deal of Barrie's writings, but most famously in Peter Pan, or The Boy Who Wouldn't Grow Up. 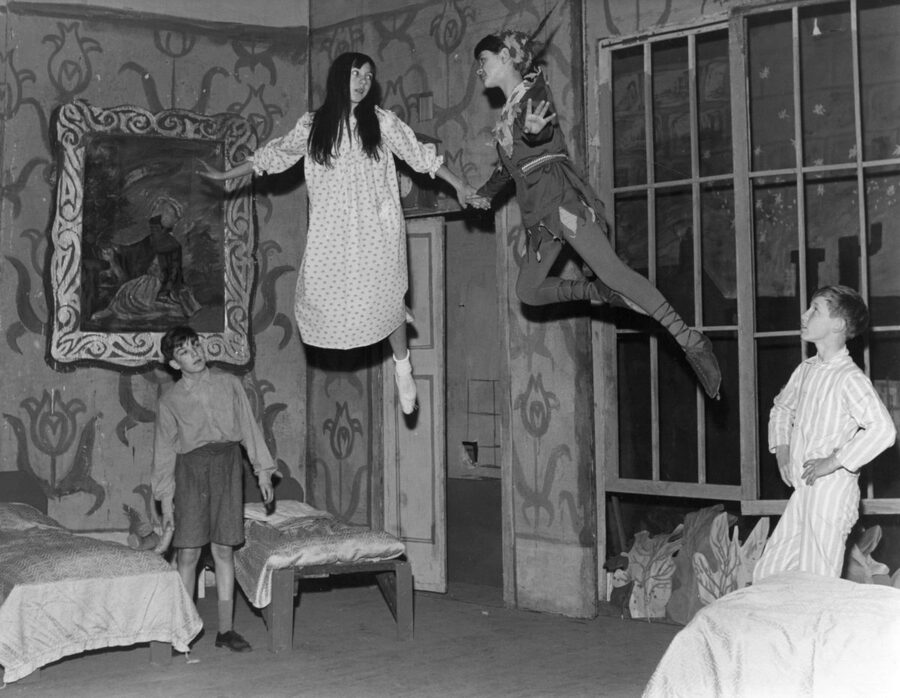 Barrie moved to London, where he became well known as a playwright and novelist. In 1894, he married an actress named Mary Ansell, but it wasn't a happy union, and ultimately ended in divorce. In a way to escape his uneasy home life, Barrie began taking long walks with his St. Bernard, Porthos, through London's Kensington Gardens. It was there that he met three of the five Llewelyn Davis boys, George, John, and baby Peter, who served as further inspiration for his writings. Childless himself, Barrie spent hours entertaining the boys with his stories, and impressing them with his ability to wiggle his ears and eyebrows.

The 1902 book, The Little White Bird, marked the first appearance of the character of Peter Pan. Two years later, Peter Pan premiered as a stage play and was a great success. Audiences loved the tales of an ageless flying boy and the Darling children, who had wonderful adventures together in Neverland. On December 14, 1929, Barrie had the cast of the London production of Peter Pan come to the Great Ormond Street Hospital and perform the nursery scene for the children. He had been a great supporter of the hospital for many years, and was even asked to serve on the committee to help the hospital raise funds for a much needed new wing. Barrie declined, but made it clear that he would find another way to help.

Instead of simply raising some money or making a big one-time donation, JM Barrie performed what can only be described as a miracle. Unbeknownst to the hospital, starting in 1929, Barrie began donating 100% of the proceeds he earned from his Peter Pan royalties to GOSH. Barrie instructed his lawyers to keep the source of the donations anonymous. In those early years, the donations amounted to the inflation adjusted equivalent to several hundred thousand dollars. Just enough money to keep the hospital's doors open.

But as we mentioned, GOSH had no idea where the money was coming from and had to assume it might run out at any time. Then JM Barrie performed a second miracle, this time from the grave. After Barried died in 1937, not only was he revealed as the source of the hospital's miracle donations, but GOSH discovered they were the beneficiaries of a much larger gift. It turned out that in his will, JM Barrie bequeathed 100% of the rights to his most well-known creation, Peter Pan, to the Great Ormond Street Children's Hospital. Barrie wasn't just giving away proceeds from the popular play, he was giving GOSH the rights to "Peter Pan" as a concept.

As further evidence of JM Barrie's selflessness, the final stipulation of his will requested that the hospital never reveal the amount of money it received from his gift. And for nearly 85 years, GOSH has honored the writer's wishes.

According to several experts, over the decades, the Peter Pan royalty has generated tens of millions of dollars for GOSH, helping them grow into one of the world's leading children's hospitals that provides over 220,000 patient visits every year today. The institution has become so important that Princess Diana was president of GOSH for eight years, starting in 1989 until her tragic death in 1997.

Interestingly, the UK and European copyright for Peter Pan should have expired in 1987, 50 years after JM Barrie's death. Fortunately for GOSH, they were about to experience a third and final miracle. At the time, one of the GOSH's trustees was a woman named Audrey Callaghan. Audrey happened to be married to the British Prime Minister, Jim Callaghan. Who knows how it went down, (I like to pretend it involved the withholding of sexy time in the bedroom), but eventually Jim Callaghan was convinced that something needed to be done to protect GOSH's million dollar miracle. In 1988, Jim successfully lobbied British Parliament to grant GOSH an unprecedented exception to UK copyright law. This amendment made it so instead of entering into the public domain, Peter Pan would remain a copyrighted work in the UK in perpetuity, AKA forever. Furthermore, a special European Union directive extended the hospital's EU copyright an extra 20 years.

In the United States, the question of copyright has been a little trickier. According to US copyright law, a work enters the public domain 95 years after first publication. That means the Peter Pan novel, which was published in 1911, entered the public domain in 2006. However, because Peter Pan as we know it today is actually based on the 1928 stage version, GOSH's film and stage copyright in the United States will be active 95 years from 1928, which is 2023. This last point has caused some serious headaches in Hollywood over the years. Recently, Disney allegedly pulled out of an planned film adaptation of the Peter Pan play, because it did not want to give up merchandising rights to the hospital.

In 1913 JM Barrie was made a baronet by King George V. This entitled him to be forever referred to as "Sir" James Barrie. He also was awarded the Order of Merit which honors great contributions to and distinguished service to the British armed forces, science, art or literature. More importantly, over the last 84 years, JM Barrie's incredibly generous gift as provided three major miracles for the Great Ormond Street Children's Hospital. And since the Catholic church requires three miracles in order to qualify for sainthood, maybe we will be seeing a St. Barrie some day soon!