By Amy Lamare on October 9, 2019 in Articles › Entertainment

Childish Gambino is a sensation. I attended Bonnaroo this past summer and he headlined one of the nights. I'm a rock and alt rock fan, but I thought "well he's big right now" and I'd never seek him out otherwise, so I went to catch his show. More Broadway production than concert, he certainly captivated the crowd of roughly 60,000. And rap isn't even Childish Gambino's main gig. Donald Glover a/k/a Childish Gambino, is a rapper, actor, writer, comedian, and producer who first gained fame thanks to his role on the hit sitcom Community. Before that, he was a writer for 30 Rock. This year, he's one of the highest-paid hip hop artists with a $35 million payday.

Glover was born on September 25, 1983 on Edwards Air Force Base in California. He was raised in the Atlanta suburb of Stone Mountain, Georgia. His mother is a retired daycare provider and his father is a retired postal worker. He was raised as a Jehovah's Witness in a home with his brother Stephen, sister Brianne, and the various foster children his parents took in. While in high school, he was voted "Most Likely to Write for The Simpsons." He graduated from NYU with a degree in Dramatic Writing. Right out of college, he was hired to write for the NBC comedy 30 Rock, after Tina Fey saw a spec script for The Simpsons that she loved. In 2009, Glover booked the role of Troy Barnes on Community. His character was a former high school star quarterback who abandons his former identity as a jock and embraces his nerdy, childish side. He created the television series Atlanta. FX ordered the pilot of Glover's show for a 10-episode season in October 2015 and it premiered on September 6, 2016 to widespread critical acclaim. 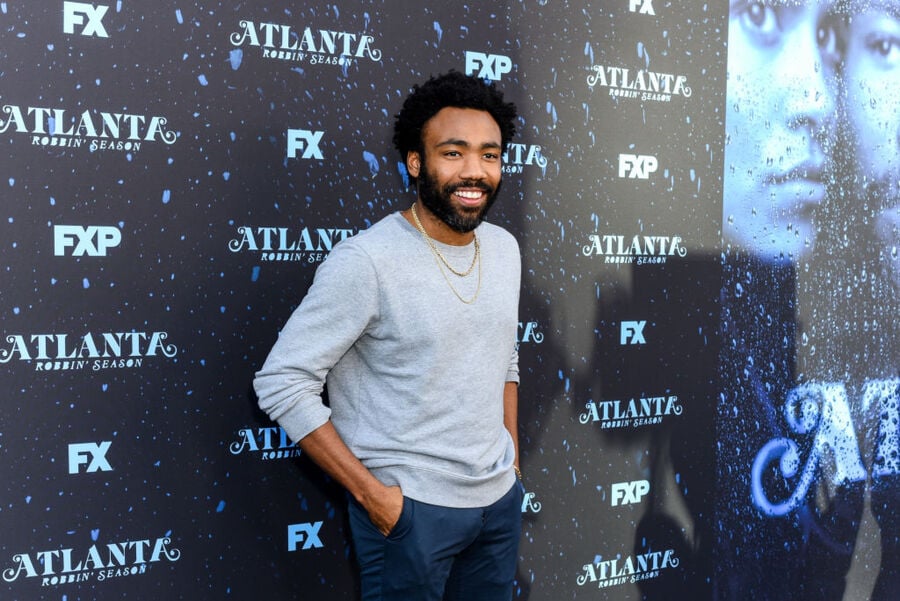 Where did Childish Gambino come from? Glover came up with his rap alter ego by using the Wu Tang Clang's name generator. (My Wu Tang name generator name is Babyfaced Ambassador.) In 2011, he signed to Glassnote Records under the stage name Childish Gambino. For the label, Glover released his first album titled "Camp" on November 15, 2011, which was loved by both critics and music fans alike. He released the albums "Because the Internet" in 2013 and "Awaken, My Love!" in 2016.

In January 2017, Donald Glover won a Golden Globe for the show Atlanta, which he created, wrote, produced and directed. Glover has appeared in several films including The Muppets, Alexander and the Terrible, Horrible, No Good, Very Bad Day, The Lazarus Effect, Magic Mike XXL, The Martian, and Spider-Man: Homecoming. In 2017 Glover won Primetime Emmy Awards for Atlanta for Outstanding Lead Actor in a Comedy Series and Outstanding Directing for a Comedy Series. He was also nominated for Outstanding Writing for a Comedy Series and Outstanding Comedy Series. He has also won three Writers Guild of America Awards for 30 Rock and two others for Atlanta. Glover was also nominated for Grammy Awards for Best Rap Album and Best Rap Performance in 2015. In 2018, Donald Glover starred in Solo: A Star Wars Story as Lando Calrissian.

In May 2018, he released a single titled "This Is America" while performing dual hosting and musical duty on Saturday Night Live. The song debuted at number one, becoming both Glover's first number one and top ten single in the United States. The song features him both singing and rapping with its lyrics addressing a variety of topics including gun violence and being black in the U.S. "This is America" won the Grammy for Song of the Year, Best Music Video, Best Rap Performance and Record of the Year, becoming the first rap song to win the latter.