By Joey Held on October 17, 2016 in Articles › Entertainment

If you've ever visited a new city, chances are you've used Lyft, Uber, or other ride-sharing service. Even if you've stayed in your own town, maybe you've taken advantage of one of these services to avoid the hassle of parking at a sporting event, or to get home safely after a night out. It's a very nice convenience, and for the drivers of these various companies, it's a good way to make a little bit of extra cash.

Anthony Pence is one person who's familiar with ride-sharing. And just this summer, he seemed to have it all. He was a reporter and weekend morning anchor for WMAQ, the NBC affiliate in Chicago, with a nice salary and a high profile throughout the neighborhood. He had been with the company for nine years, and with weekday morning anchor Stefan Holt departing, Ponce was among the candidates to replace him.

The weekday morning anchor position is a big one in news – you're essentially greeting people as they wake up and getting their day started. In making their promotion decision, WMAQ passed over Ponce, and the 37-year-old quit the station to greet people in a different way: as a Lyft driver. He chose Lyft over other ride-sharing services because, as he notes, Lyft drivers get the stylish pink mustaches to put on their ride.

Wait, what?! Ponce walked away from a cushy gig that made him a trusted and valued face in the city in order to drive people around? People in the media and beyond understandably thought Ponce might be a little crazy, particularly as he and his wife had a five-month-old son when Ponce made his decision. But in the end, the reporter is getting the last laugh. He just joined podcasting giant PodcastOne — the company that's produced hit podcasts from comedian Adam Carolla, magician Penn Jillette and basketball great Shaquille O'Neal.

That's right. Ponce isn't solely a Lyft driver. While he did quit his job after being passed over for a promotion, that's only part of the story. He also wanted to follow his passion, a podcast called "Backseat Rider," where he has conversations with his riders. He got the deal from PodcastOne after posting a Facebook video detailing his plans to make the risky move, and earlier this month his very first episode went life. And, in perhaps an unsurprising move, the theme of that debut episode is "risk."

According to Ponce, hearing his guests' stories "really put the risk I was taking into perspective." They ranged from more common decisions, such as buying a house or a couple discussing their feelings with one another, to more intense risks, such as scurrying down dangerous streets in the city to avoid being shot or walking through mine-littered roads in Afghanistan. 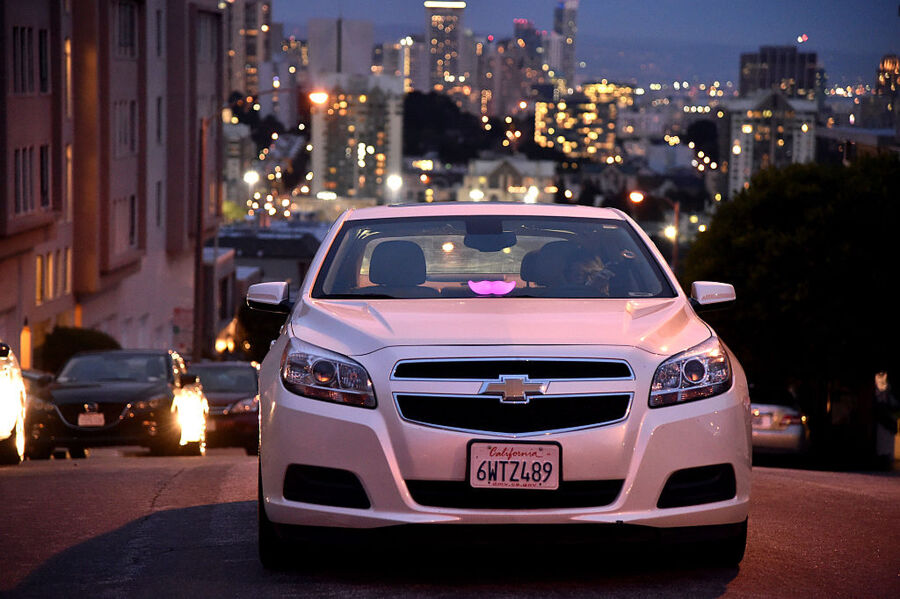 Ponce, who records his passengers' conversations anonymously if they so choose, made the decision to jump to Lyft full time after a city ordinance that might have removed the ride-sharing service from the city was shot down. His wife supported the decision, though the couple agreed that if Ponce's idea hadn't taken off in six months, he'd have to get a more traditional job.

He said he's been driving passengers about three days a week so that he can still look after his son. Now that he's required to produce 52 episodes thanks to his new deal, though, he expects to increase the number of hours behind the wheel.

Much like how he's relying on his passengers to provide great conversations, he's hoping listeners will join in on the Facebook page, posting their own responses to the episodes, as well as suggesting topics for future conversations. Upcoming episodes include a Halloween theme and a presidential election special.

Ponce actually started driving for Lyft about four months before quitting his job at WMAQ. He was inspired by hit podcasts like "Serial" and "This American Life," but also noticed a trend in car-based interviews. Shows like Jerry Seinfeld's "Comedians in Cars Getting Coffee" or James Corden's "Carpool Karaoke" segments really seemed to resonate with audiences. Ponce began recording guests in his Chevy Equinox – Lyft helped him rent through a program with GM, as his 2001 Saturn with 160,000 miles on it would not have passed inspection – in March, and would park his car across the street from the NBC studios while he moonlit as a driver. He was fortunate to drive in relative anonymity. Even if his passengers recognized him, nobody ever took a picture of his car at the NBC lot or posted about their ride on social media.

The former reporter was disheartened by the speed at which TV news operates, believing the quick sound bites you hear on television often don't get into the complexity of a story.

"Audio is so much less intrusive than video and a car can be like a miniature recording studio," Ponce said when he first started his project. "People really open up when they don't have a giant camera in their face – I'm not even looking at them when we're talking because I have my eyes on the road."

Much like the city of Chicago itself, Ponce's clientele has been incredibly diverse. He's chatted with an exotic dancer from a strip club who estimated the NFL Draft to be one of the busiest weeks of the year. He's spoken with a woman who went into detail about how her boyfriend tried to kill her and is now locked away in prison.

For Ponce, though, the most rewarding conversations come from the more relatable stories. A Chicago Public Schools worker, who has to take a second job at Target in order to help put her kids through college, and a CEO of a consulting firm have both had great chats with Ponce, provided he keeps their names and faces private and anonymous. Even without a large camera in the way, some passengers still opt for privacy.

Ponce's podcast, which up to this point had been entirely funded by him, has been his passion project, and now it's finally paying off. Check out the trailer from his YouTube page below, and if you ever get a Lyft in Chicago, who knows? You just may end up as a featured guest.