By Joseph Gibson on June 1, 2012 in Articles › Entertainment

Earlier today we reported on NBA player DeShawn Stevenson getting an ATM installed in his home. But even Stevenson (or his home ATM mentor Rob Dyrdek) would be impressed by the Gold To Go – often billed as "the most expensive ATM in the world," the Gold To Go is for financial denizens who are beyond cash and demand actual gold in their pockets.

As is often the case with marketing though, the term "ATM" is a bit misleading when referring to the Gold To Go. It's more accurately a vending machine – but instead of snacks or soda, it dispenses pure gold in the form of gold bars, gold coins, and even some silver coins (for if you're a little light on cash).

Here's how it works: You approach the machine and select which solid gold item or items you want to walk away with. Then, the vending machine's on board computer tells you exactly how much the item costs according to up to the minute gold exchange rates. Finally, insert your cash (or swipe your credit card), and the gold you selected is deposited into your hot little hand. Congratulations, you have now invested in gold! 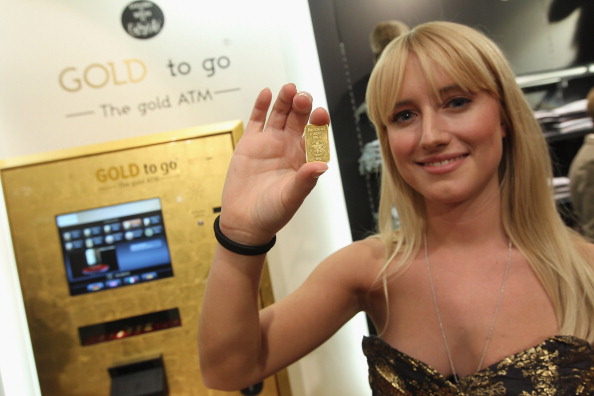 One of the features that makes the Gold To Go machine a worthwhile idea is the relatively low prices the machines can offer on gold products. This is because unlike a traditional gold merchant or jewelry store, the Gold To Go's overhead is very low, and those savings are passed on to the customer. Think of it as a Redbox but for gold bars instead of DVDs (but unlike a Redbox DVD, you're not supposed to return the gold!)

So where can you find one of these machines? They're much more common in Europe than in the United States, so in the US there are only two of them: One at the Golden Nugget Hotel & Casino in Las Vegas, and another at the Golden Nugget Hotel & Casino in Atlantic City. But if you're not close to either of those locations, you can click on the gallery below to see some shots of the Gold To Go. Enjoy!