The Chainsmokers Among The Year's Highest-Paid Entertainers

By Amy Lamare on September 20, 2017 in Articles › Entertainment

The Chainsmokers made $38 million over the past year. The Chain… who? You wouldn't be alone if you've never heard of them or if you've only heard the song "Something Just Like This," which is their collaboration with Coldplay. Or maybe you heard "Closer" their collaboration with Halsey? Those two songs have been playing on rock and alt-rock stations nonstop and introduced a whole new audience to the EDM-pop duo from New York City. Of course if you're an EDM fan, you know that Andrew Taggart and Alex Pall have been a veritable hit factory for the past several years.

Regardless, The Chainsmokers, who formed in 2012, just released their DEBUT ALBUM this year. That, and their major arena tour hitting 71 cities across the world was enough to take this relatively unknown duo and catapult them onto the list of the 100 highest-paid entertainers of the year. That's a pretty impressive feat. The Chainsmokers made more money in the last year than more established acts including Ed Sheeran, Rihanna, Katy Perry, Dolly freaking Parton, Britney Spears, Florida Georgia Line, Toby Keith, and Dr. Dre. And by the way, the song "Last Day Alive," is a collaboration with Florida Georgia Line. 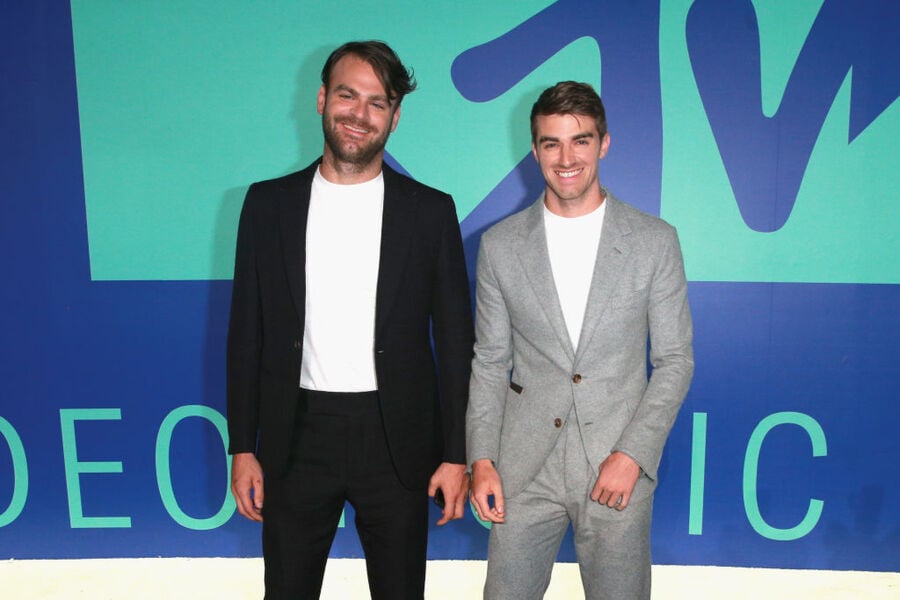 It seems that whatever 27-year-old Andrew Taggart and 32-year-old Alex Pall touch lately turns into a money-making machine. A few weeks after its release, The Chainsmokers and Coldplay's "Something Just Like This" broke the record for most views of a lyric video on YouTube in one day. The song racked up over 9 million views, surpassing Justin Bieber, who had held that record since 2015.

The Chainsmokers formed as an EDM DJ duo in New York City in 2012. Pall had grown up DJing and was introduced to Taggart by a manager named Adam Alpert. Taggart was working in an art gallery in the Chelsea neighborhood of Manhattan at the time. Pall attended New York University where he studied art history and the music business. Taggart attended Syracuse University and interned at Interscope Records. The duo found that writing pop songs came pretty effortlessly to them, a skill that has kept their music playing in endless loops on radio stations for the past year.

Don't expect The Chainsmokers to fall off the list of highest-paid entertainers anytime soon. When they wrap up their world tour in Auckland, New Zealand on September 16th, they've got a new, three-year, $38 million residency at the Wynn in Las Vegas to look forward to. Under the terms of the agreement, The Chainsmokers will only perform in Wynn-owned nightclubs XS Las Vegas and Encore Beach Club until the year 2019.