By Sara Schapmann on September 19, 2013 in Articles › Entertainment

Back in January 2007, Eric Nakagawa and Kari Unebasami were typical nine-to-fivers working for the man. Today they are both millionaires. While that alone may not be a particularly amazing occurrence, you will probably be shocked to find out what caused their fortunes to rise. One day the two of them accidentally stumbled up inside joke that soon snowballed into an online meme empire that allowed them to quit their day jobs and gave their bank accounts seven figures.

After a particularly bad "case of the Mondays" at work–okay, maybe it wasn't a Monday, but some Lumberg-type characters were undoubtedly involved, Eric dialed up Kari for some healthy venting. In an attempt to cheer up her pal, Kari emailed him a photo of a very portly cat from a Russian cat food ad that had given her a giggle. She whimsically placed the words, "I Can Has Cheezburger?" over the photo. This sent Eric into fits of laughter (Laughter, Out Loud to be exact) and he thought it would be funny to put the photo online to share with friends. Within minutes he had purchased the domain name, icanhascheezburger and out went Professor Happycat into cyberspace. It is with that move that the LOLcat craze was born and Eric and Kari's checking accounts got much larger. 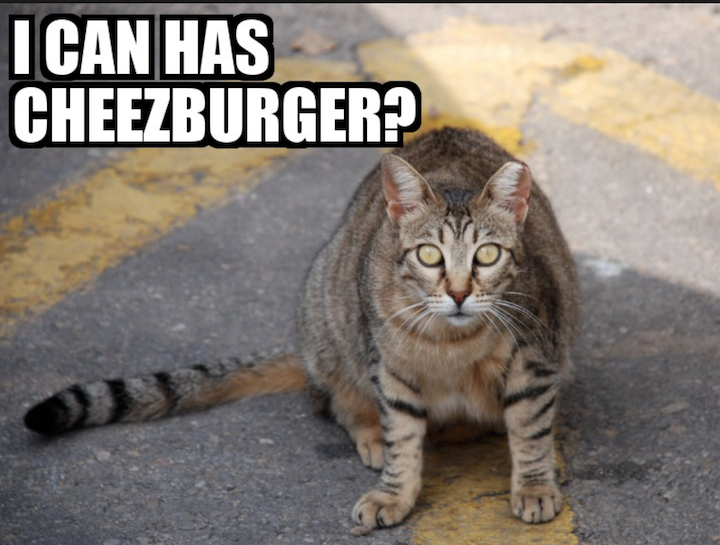 Photo via Or Hiltch/Wikimedia Commons

They were only intending to post the one photo, but it was such a hit that Kari and Eric created a series of similar photos of Professor Happycat's adventures obtaining the cheeseburger. And more cats followed—all captioned as if the cats themselves were talking some silly animal language. Visitors to the site began commenting on and sharing the photos like the latest shirtless Justin Bieber photo stunt. Soon fans were submitting their own photos and captioning them in this new founded "kitteh" dialect.

Kari and Eric were running with it. They began posting photos at opportune times to give worker bees punching the clock around the world a little "laugh out loud"—morning, lunch time, the last dragging hours before quittin' time.

The site's popularity continued to soar and the pair soon found their creation featured in national publications and picked up on well-respected news sites. Photo submissions were coming in around 2,500 a day; what started as a hobby was becoming more like a full-time job. Kari and Eric decided to monetize their creation with advertising space. Why not get a little spending money for their efforts? The move paid off, and soon they were pulling in enough cash for Eric to do the gig full time. By May of 2007, ICHC was getting up to 1,500,000 hits per day and the money was following. The dynamic duo also added merchandise to the mix and could barely keep up with the demand.

Just when Eric and Kari were feeling like they needed to make hard decisions about the future of the website due to the increasing workload and the natural evolution it was making toward becoming a "real business" with real business issues, a glitch answered the question for them.

Across the country, Internet entrepreneur Ben Huh had a blog about the daily adventures of his dog in Seattle. During the cat food contamination scare of 2007, Ben got his hands on a list of the responsible company's customers, revenues, and facility locations and posted it online. ICHC was one of many animal-focused sites that linked to Ben's list. As a result, the site traffic was much more than ICHC's server could take, and it crashed.

Eventually, ICHC was up and running again, but the hiccup connected Kari and Eric with Ben, who would turn out to be a key player in their lives. Ben liked what he saw on ICHC and began working to get investors on board. He ultimately offered Kari and Eric $2 million for the site in September of 2007; they accepted. The newfound fortune was just what Kari needed to follow in Eric's footsteps and quit her day job as a web editor for Pacific Basin Communications.

Kari keeps a very low profile these days. Eric went on to take numerous speaking engagements about online communities and web development and founded SimpleHoney, which was recently acquired by OpenCoin. As for those LOLcats, they are still gracing the smart phones and company computers of bored workers across America and beyond. After Huh bought the site, he developed the Cheezburger Network—a slew of sister sites such as FAIL Blog, Know Your Meme, and Memebase. He even starred in LOLWork, a 2012 reality show, which followed the lives of Cheezburger Network employees on Bravo.

And that, friends, is how one fat cat made two people's bank accounts very fat, and another person's bank account even fatter using silly photos of cats with funny sayings!