By Simon Gerard on September 27, 2011 in Articles › Entertainment

Jay-Z and co-owner Bruce Ratner have announced the official name change of the New Jersey Nets to the Brooklyn Nets for the 2012-13 season. To celebrate, Jay-Z is planning several concerts at the upcoming Barclays Center, the new home for the Brooklyn Nets which is still under construction. He plans to have eight shows in the weeks leading up to the start of the 2012-13 season next September.

Jay-Z first invested in the New Jersey Nets back in 2004 along with Bruce Ratner's group. There has been much hype and rumors about the move to Brooklyn over the last few years, with the name only being made official yesterday. A milestone in the short history of the Brooklyn Nets was when Russian tycoon Mikhail Prokhorov bought a majority stake of the New Jersey Nets from Ratner and Jay-Z in 2009 for $200 million. This also included Prokhorov loaning the $700 million to help build the upcoming Barclay's Center in Brooklyn.

Brett Eormark, chief executive to the Nets, said that Brooklyn was an easy choice for a new home because it is not only an American icon, but an icon that has a global presence. And with Jay-Z as their (semi) official mascot, I can only see the popularity of this team growing to new hights, both here in the States and internationally. As a Brooklyn native, Jay-Z says he's proud to bring this team to his home town and appreciates the support from his fellow Brooklynites. Jay-Z also plans to be involved in the design of the new logo and uniforms. 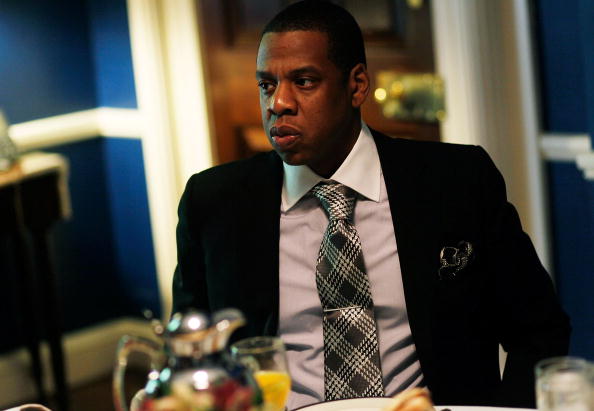 Jigga reflecting on how incredibly balling he is / Chris Hondros/Getty Images
Did we make a mistake?
Submit a correction suggestion and help us fix it!
Submit a Correction