By Brian Warner on September 24, 2016 in Articles › Entertainment

On June 17, 2014, Popeyes Louisiana Kitchen Inc. announced that it signed a landmark deal to acquire the rights to their secret recipes for $43 million. Popeyes made the deal with the estate of the company's late founder, Al Copeland Sr. You might be surprised to hear that Popeyes didn't already own their secret recipes. You might be even more surprised that Al Copeland Sr, who died in 2008, hadn't been involved with Popeyes since he drove the company into bankruptcy in 1991. So how did Copeland's heirs manage to score a $43 million posthumous payday? As you are about to learn, this is just yet another amazing story in the absolutely fascinating life of Al Copeland Sr. A man who was equally famous in Louisiana for his flamboyant lifestyle and incredibly generous acts of philanthropy. A man who managed to die with nine children from four wives. A man who, despite being born into wretched poverty and never graduating high school, died with a net worth conservatively estimated at $400 million dollars. Al Copeland Sr was a truly fascinating and inspirational person…

Alvin Charles Copeland was born on February 2, 1944 in New Orleans, Louisiana. His family was dirt poor. Al and his two older brothers were raised by a single mom in a rough housing project after their father abandoned the family. Al dropped out of high school at the age of 16 and got a job at a local super market to help support the family. He soon landed a job managing a donut shop called Tastee Donut. At some point, Al was offered the opportunity to buy a brand new new Tastee Donut location. He jumped at the opportunity and sold his car to cover the startup costs. This is where Copeland got his first taste of the lucrative world of fast food franchising.

Copeland lived frugally and saved every penny with the intention to buy another Tastee Donut. As fate would have it, by the time he had the money to buy that second donut store, Al had an even bigger idea. Sensing an even bigger opportunity, in 1972 Copeland decided to launch a restaurant that blended local Cajun flavors with fried chicken and home-style cooking. Al was just 28 years old when he opened the first "Popeyes Mighty Good Fried Chicken" in Arabi, Louisiana, a suburb of St. Bernard Parish. The restaurant was soon renamed "Popeyes Famous Chicken & Biscuits", then just "Popeyes Famous Fried Chicken"… but pretty quickly it was simply known as "Popeyes". 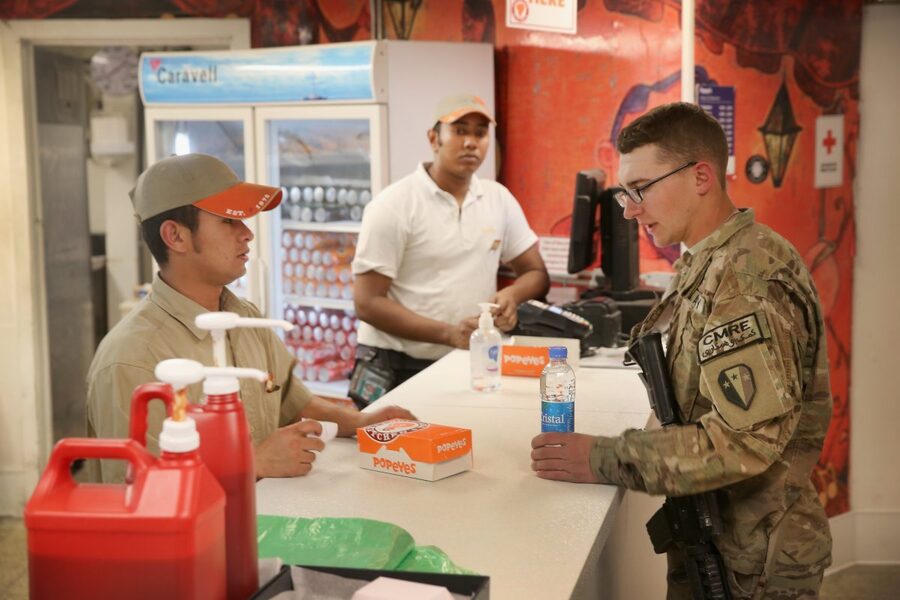 Popeyes was an instant hit. Copeland soon expanded to two locations. Then three. Then four. In 1976, he opened his business up to franchising. Between 1976 and 1986, Popeyes expanded to more than 500 locations. By 1989, there were 700 locations around the world and Popeyes was the third largest quick-service chicken restaurant in the world behind Church's Chicken and KFC.

So what does an ambitious man with the #3 chicken restaurant in the world do next? He makes a deal to buy out the #2 restaurant obviously! In 1989, Copeland negotiated a deal to acquire Church's Chicken for $380 million (roughly $730 million after adjusting for inflation). The combined company now operated over 2000 quick-service chicken restaurants. Still not enough to top KFC's 6000 locations, but impressive nonetheless.

Unfortunately, the merger turned out to be a major bust. The anticipated cost savings of the combined companies never materialized. In fact, because Church's and Popeyes were still being marketed as separate and distinct restaurants, many costs actually went way up. Adding fuel to the fire was the fact that Copeland financed the acquisition almost entirely with debt. Every year, the interest payments on the debt amounted tens of millions of dollars.

In April 1991, Popeyes was forced to file for Chapter 11 bankruptcy with debts totaling over $400 million. In October 1992, a bankruptcy judge allowed the company's creditors, operating as a newly formed entity called America's Favorite Chicken (AFC), the right to acquire and run all Popeyes and Church's locations. 20 years after launching his baby, Al Copeland would was relieved of his chicken duties forever.

But wait! There was one small silver lining. Thanks to an extremely shrewd business decision made years earlier Al Copeland may have been down, but he wasn't totally out. Copeland may have lost the rights to his beloved Popeyes restaurant locations in the bankruptcy, but he still controlled one extremely valuable asset: The secret recipes.

Pay attention, because this was a truly brilliant move. Back when Copeland first started to franchise, he technically formed two companies. The first company operated the franchise business and all the owned and operated restaurants. The second company was called "Diversified Foods & Seasonings". Diversified Foods & Seasonings basically controlled one asset: The intellectual property rights to all the secret recipes that made Popeyes chicken and sides taste so darn good.

By contract, every Popeyes restaurant in the world was required to use these spices to give their chicken its distinct Cajun flavor. This company owned and operated five spice plants, two in Louisiana, one in Alabama, one in San Antonio and one in Nebraska. Every Popeyes franchise was required to pay an annual royalty to Diversified Food & Seasonings in order to receive their spices. The contract for these rights was scheduled to last until the year 2029.

When AFC brought Popeyes out of bankruptcy, it had no choice but to continue paying Diversified Food & Spices annual royalties for access to the secret recipes. Those royalties amounted to $10 – $13 million per year in profits for Al Copeland.

Armed with basically a million dollars a month in royalty profits, Al Copeland proceeded to launch dozens of new businesses. He opened several new restaurants, bought three hotels and even two comedy clubs. One of his hotels, The Clarion Grand Boutique Hotel in New Orleans, is one of the highest rated in the entire country.

So exactly how rich was Al Copeland? During his 2004 divorce proceedings (wife number 3 out of 4), it was revealed that Al Copeland had a personal net worth of $400 million dollars and an annual income that fluctuated between $13 and $15 million. Not bad for a high school dropout who was born into poverty and raised in a housing project!

Sadly, Al Copeland was diagnosed with a rare form cancer in December 2007. He died just four months later on March 23, 2008, in Munich Germany, where he was receiving an experimental treatment. Copeland was just 64 years old.

As we mentioned in the beginning of this article, earlier today Al Copeland's heirs reached a deal to sell the rights to the secret recipes in perpetuity for $43 million dollars. Popeyes Louisiana Kitchen, which is till majority owned by AFC, is now a publicly traded company on the NASDAQ, ticker symbol PLKI. Popeyes' CEO Cheryl Bachelder (the first female CEO of a major fast food restaurant) proclaimed:

"This is an exciting and historic event representing a win for everyone involved. We now have the recipes in house in perpetuity, and we thank the Copeland family for helping bring together the treasured recipes Popeyes is known for with the brand so beloved by its guests."

And as if all this wasn't amazing enough, while he was alive Al Copeland never forgot his humble beginnings. He used his wealth to launch several charities that focused especially on education and giving poor kids get better opportunities in life. He established the Alvin C. Copeland Endowed Chair of Franchising at Louisiana State University and provided the funds to launch a Chef Apprentice school at Delgado Community College in New Orleans. Al Copeland certainly lived life to the fullest and the world is much better off because of he was in it!