By Amy Lamare on January 29, 2019 in Articles › Entertainment

It all started with a cup of coffee. In 1981, Howard Schultz walked into a small coffee shop called Starbucks located in Seattle's Pike Place Market for the very first time. He was struck by a number of things, but most importantly, by how a cup of coffee could start a conversation and that conversation could start a community. At the time, there were four Starbucks locations in the world. Fast forward a few decades and Starbucks has grown the company to more than 23,000 worldwide locations. This is the story of how one cup of coffee launched an empire, changed the world and earned one savvy entrepreneur a multi-billion dollar fortune…

Howard Schultz was born in Brooklyn, New York in 1952 the son of ex-US Army trooper and then truck driver Fred Schultz, and his wife Elaine. His family was very poor. Howard was raised by his parents, sister Ronnie, and brother Michael in a New York City housing project – specifically the in the Canarsie Bayview Houses. In order to distract himself from the poverty at home, Howard escaped through sports. He played high school baseball, football, and basketball. He went to Canarsie High School, graduating in 1971. In high school, Schultz was an exceptional athlete and was awarded a football scholarship to Northern Michigan University—his ticket out of his impoverished childhood. He was the first person in his family to go to college. A member of Tau Kappa Epsilon fraternity, Schultz received his bachelor's degree in Communications in 1975.

After graduation, Schultz spent four years working at Xerox before moving on to a job at Hammerplast, a Swedish manufacturer of drip coffeemakers. He eventually became manager of U.S. operations for Hammarplast. This is how he ended up in Pike Place Market Starbucks in 1981. Starbucks at the time was one of Hammarplast's best customers.

On that fateful day, Schultz was drawn into conversation with these connoisseurs of coffee who, rather than roasting the easiest bean, sought out the very best tasting, best smelling, highest quality coffee they could find. But it was more than just that passion for the best coffee that struck Schultz, it was also how the Starbucks proprietors wanted to share this passion for coffee with others.

Schultz saw a massive opportunity and immediately knew he had to get a job at Starbucks. It took him a year to convince Starbucks to hire him. In 1982, Schultz left New York and moved to Seattle to become Starbucks' Director of Operations and Marketing. At the time, Starbucks had four stores and Schultz was 29 years old.

In 1983, Howard took a trip to Italy and was taken in by the romance of the Italian cafe culture. These little romantic cafes existed on every block. They were the meeting place  where everyone came have a conversation or read the paper.  These Italian coffeehouses were an integral part of their patrons' days. Howard thought he could bring that Italian coffeehouse tradition back to Seattle, turning a coffee bar into an integral stop in a person's day. His instinct was clearly spot on.

However, in order to make his dream a reality, he had to leave Starbucks, which at the time was solely a purveyor of coffee beans. The owners at the time did not envision turning Starbucks into a "restaurant". 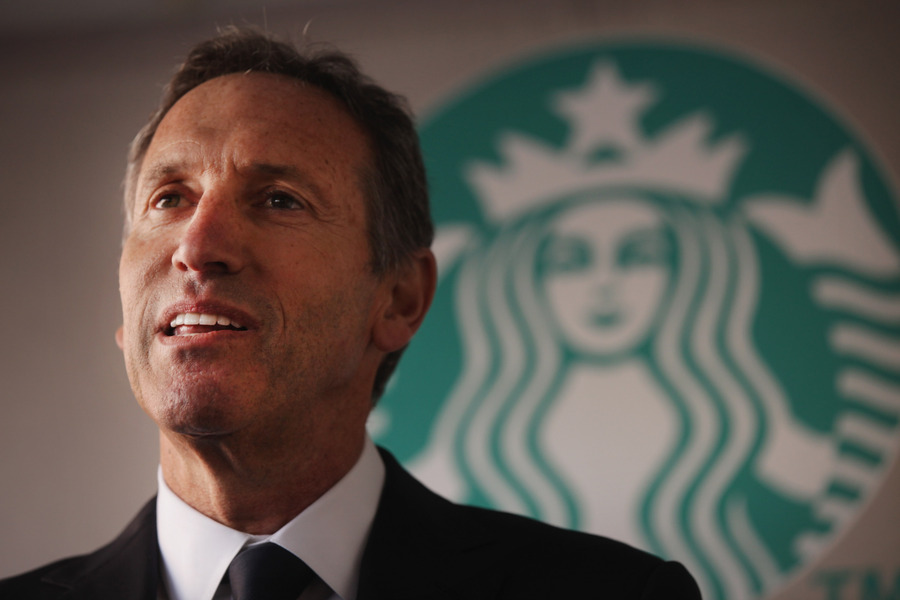 Schultz started his own coffee company called Il Giornale. He would not be gone from Starbucks for long, however. He came back in 1987 to buy the company (with the help of local investors) for $3.8 million. That's roughly $7 million dollars after adjusting for inflation.

Under Howard's leadership, Starbucks expanded rapidly in the 1990s. The shops seemed to multiply like rabbits overnight, on every corner. Throughout this rapid growth, Schultz always said the goal of the company was simply "to serve a great cup of coffee". He also wanted "to build a company with a soul". This vision led to unprecedented advances in benefits for part time workers. Schultz insisted that all employees working at least 20 hours a week receive comprehensive health coverage. But he went even further – he also included unmarried spouses in that coverage. Then he introduced an employee stock-option plan. Schultz understood the importance of employee loyalty and a happy worker was a loyal worker. This lead to low employee turnover, despite the fairly low salaries of Starbucks' workforce.

Many have asked why Schultz was so generous. The answer is that he still vividly remembers how his father struggled at low-paying jobs with no benefits. He understood that his father felt beaten down because he wasn't respected. At Starbucks, Schultz simply wanted to build the kind of company that his father would have respected. He wanted his workers to feel respected and valued. Something his father never experienced.

In terms of expansion, Schultz modeled Starbucks' domination on McDonald's, with one huge difference—Every McDonald's location is franchised, while Starbucks owns most of its stores. Schultz doesn't believe that it is possible to build the strongest brand around franchises—even though McDonald's is clearly an exception to that rule.

Starbucks went public in 1992. The company currently operates 23,000 stores in 62 countries and has a market cap north of $67 billion dollars. Along the way, Howard Schultz has set aside a personal fortune of $3.4 billion dollars.

Even at this stage of his career and Starbucks' growth, Schultz continues to be a staunch supporter of the rights of his employees. While other companies, such as UPS, are cutting health care benefits for employees' spouses in preparation for the US Affordable Care Act, Schultz and Starbucks refuse to do so:

"Other companies have announced that they won't provide coverage for spouses; others are lobbying for the cut-off to be at 40 hours. But Starbucks will continue maintaining benefits for partners and won't use the new law as excuse to cut benefits or lower benefits for its workers,"

This point of view is refreshing, not just for Starbucks, but for the thousands of businesses following its lead and providing healthcare to part-time workers. In June 2014, Schultz and Starbucks shocked the world yet again when they announced that every employee of the company will be able to take as many free online classes as they want from Arizona State University.

Howard stepped down as CEO in April 2017 to focus on philanthropy and (reportedly) to explore potential political ambitions. In January 2019 Howard revealed on 60 Minutes that he was seriously considering running for President.

Howard Schultz is clearly a person who recognized when opportunity came knocking. That one cup of coffee back in 1981 eventually turned into a $3.4 billion fortune. It also changed the world as we know it today.