By Amy Lamare on June 5, 2020 in Articles › Entertainment

That title is a pretty big statement. To say that someone changed the world, they'd have to significantly change the way we think. Jeff Bezos did that when he came up with the idea for Amazon. Steve Jobs did that at Apple. But those people are few and far between in life. Anita Roddick was one of those people. Anita who? Well, perhaps you (or the ladies in your life) are fans and customers of The Body Shop. Roddick is the woman behind The Body Shop. Roddick sold shampoos and nice smelling lotions, sure, but she also championed animal rights, human rights, fair trade, and environmental protection, to name just a few of the causes she was passionate about. In 1990, Roddick founded Children on the Edge, a charitable organization that helps disadvantaged children in Eastern Europe, Africa, and Asia. She believed that business should offer a form of moral leadership, being a more powerful force in society than government or religion. 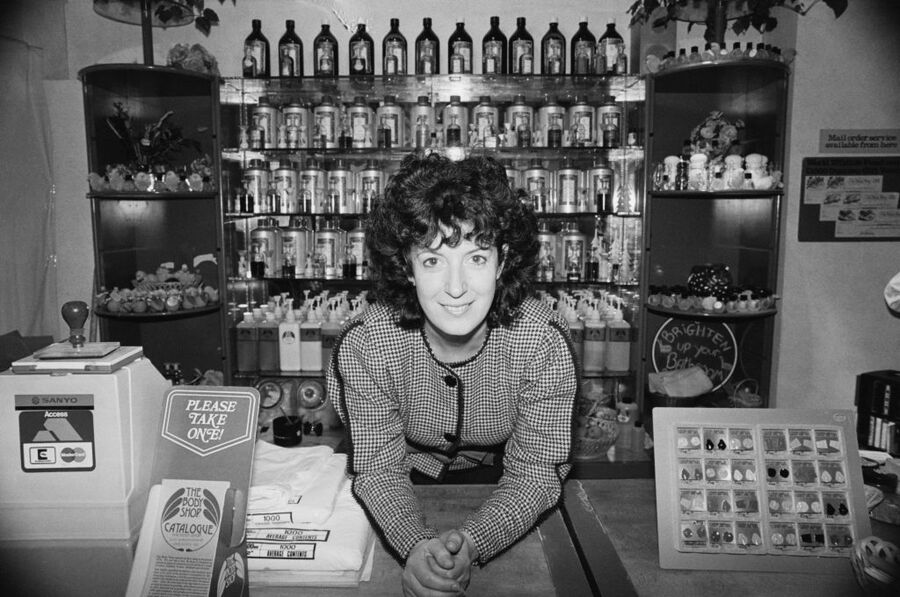 Back in the mid-1960s, Roddick was a bonafide hippie living on a kibbutz in England. In the world of business back then, England was led by businesses that were in the business of manufacturing chemicals. These companies were huge, monolithic empires that employed thousands. These companies existed to make a profit, that is all. They were not in business to be an engine of social good. Social good was for charities. Then Anita Roddick came along. She opened the first Body Shop in Brighton in 1976. She was 34 years old and simply trying to earn an income for herself and her two young children while her husband Gordon was working in South America. She wanted to provide quality skincare products in refillable containers and sample sizes, all marketed with truth rather than hype. She opened her second shop six months later. On her husband's return from South America, he joined the business.

There was a difference in Anita's products, however. None of The Body Shop's products were ever tested on live animals. That's standard practice nowadays, but 45 years ago that was not the case. Testing cosmetics on animals was standard procedure. Back in the mid-1970s, cosmetics companies tested new shampoo formulas to see how much they would sting the eyes by dropping it directly into a rabbit's eyes. Roddick didn't want any part of that barbaric practice. She found over time her customers didn't either. She found that ethical consumerism was not only great for business, but it could enable a business to change society.

Roddick set out to get cosmetic testing on animals banned in England (and not all that long after, all of Europe). She used her business for social good. In the 1970s, that was a concept that was totally unheard of. Anita showed cosmetics companies that it was possible to test cosmetics without using animals. They didn't believe it. She showed them the way. Anita Roddick wasn't just a businesswoman. She was an environmentalist who just also happened to own her own business.

Fair trade was her most important cause. She sourced exotic products from exotic places and insisted that the people who made those products be paid fairly for them. This was also a new concept that Roddick brought to the forefront of her business. Anita's insistence on Fair Trade ran counter to the exploitation of developing countries and their people that had long been the way Western capitalism did business. She was the first person to insist on Fair Trade in her business.

Human rights were also an important concern for Roddick. Her support for human rights led her to take up causes around the world, including the threat of global warming, particularly in poor, developing countries. Roddick created a model for business to also do social good.

By 1991, The Body Shop had 700 stores, and Roddick was awarded the 1991 World Vision Award for Development Initiative. In 1993 she told Third Way Magazine:

"The original Body Shop was a series of brilliant accidents. It had a great smell, it had a funky name. It was positioned between two funeral parlors—that always caused controversy. It was incredibly sensuous. It was 1976, the year of the heat wave, so there was a lot of flesh around. We knew about storytelling then, so all the products had stories. We recycled everything, not because we were environmentally friendly, but because we didn't have enough bottles. It was a good idea. What was unique about it, with no intent at all, no marketing nous, was that it translated across cultures, across geographical barriers and social structures. It wasn't a sophisticated plan, it just happened like that."

By 2004, the Body Shop had 1980 stores, serving more than 77 million customers throughout the world. It was voted the second-most trusted brand in the United Kingdom, and the 28th top brand in the world. On March 17, 2006, L'Oréal purchased Body Shop for $804 million.

Roddick was diagnosed with cirrhosis of the liver due to hepatitis C. Roddick had a large blood transfusion in 1971 after the birth of her younger daughter. She was convinced the transfusion, which was 20 years before blood donors in the U.K. were screened for hepatitis C, had infected her with the disease.

Anita Roddick died of an acute brain hemorrhage on September 10, 2007, after being admitted to the hospital the night before with a severe headache. She was 64 years old.

She left her $64 million estate to charities rather than to her friends and family.