By Amy Lamare on August 11, 2014 in Articles › Entertainment

Billionaire BMW heiress Susanne Klatten has lived a life above reproach. She is highly educated, a force to be reckoned with in the board rooms of the companies she holds stake in, and a married mother of three who famously didn't reveal her true billion-dollar identity to her now husband until AFTER he proposed.  She rarely grants interviews and succeeded at keeping her private life pretty private… until 2007 when a sex scandal rocked the European tabloids. At the center of the scandal: Susanne Klatten, a gigolo, and a blackmail plot. But how did this multiple degree holding savvy businesswoman get caught up in such an embarrassing situation? Let's find out… 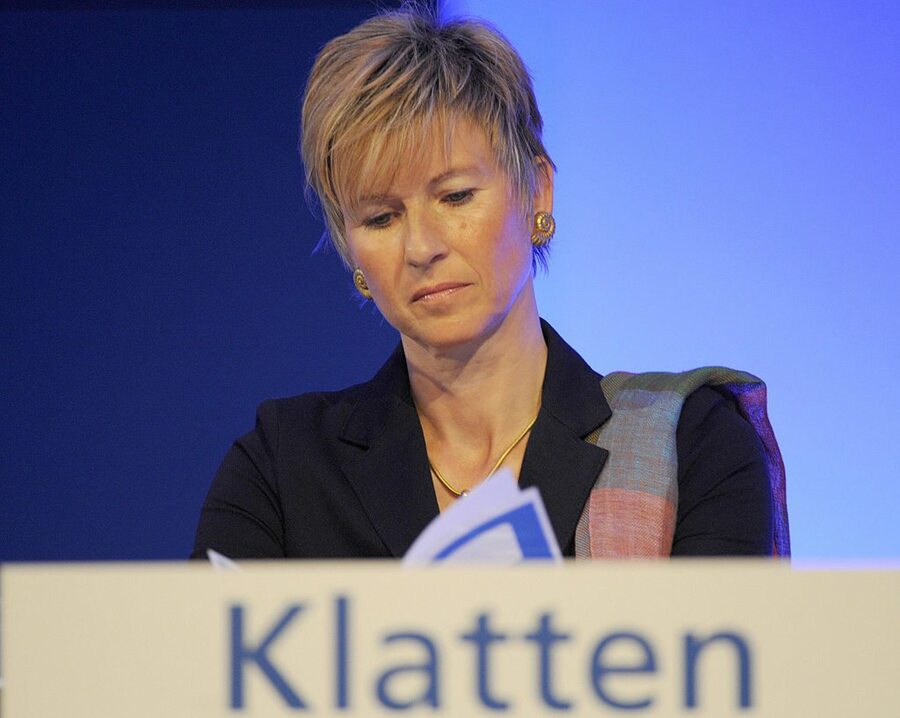 It was the summer of 2007 in Innsbruck, Austria. Susanne Klatten was a guest of the super luxurious Lanserfof resort and spa, set high in the Austrian Alps.  The resort is a favorite stop for the jet set. And Susanne was definitely part of the jet set crowd. Thanks to her 12.5% stake in BMW plus a variety of valuable corporate holdings, Susanne is worth $18.4 billion dollars. The then 45-year old was on vacation alone to clear her head and recharge her batteries. She sat in the sunshine, enjoying the views while also reading a book. But she would not be alone for long.

As she peacefully enjoyed the resort's outdoor area, Susanne was approached by a man wearing glasses. There was nothing particularly remarkable about this man. He was the type you'd pass on the street without giving a passing glance to. His name was Helg Sgarbi and he bore a resemblance to a nerdy accountant that worked for her at BMW. 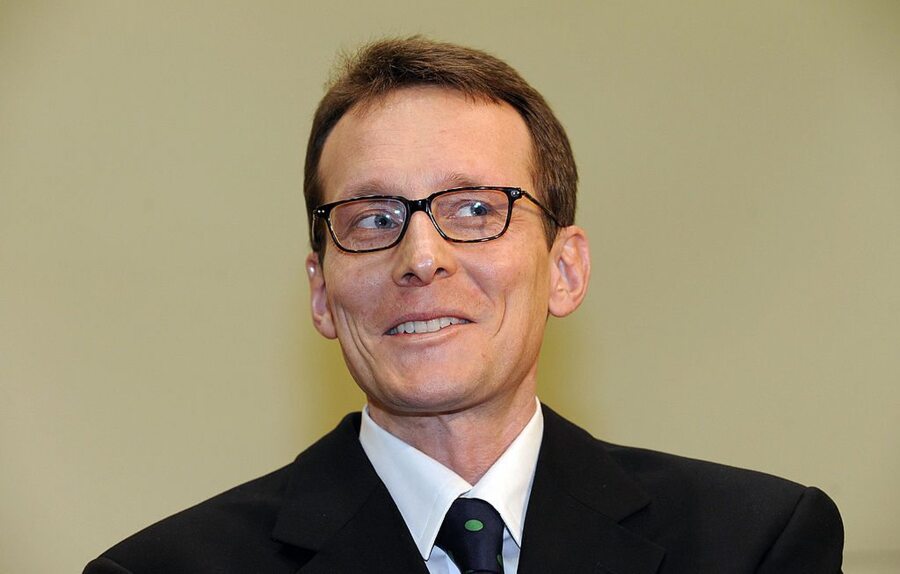 Upon his approach, Helg commented on the book she was reading — The Alchemist by Paulo Coehlo — and mentioned that he grew up in the author's native country of Brazil. Klatten, a mother of three, was known for being exceptionally reserved. She grew up in one of Europe's wealthiest and most private families. As a child she was always surrounded by bodyguards. She didn't make friends easily, or reveal much at all about herself typically, but when the seemingly gentle and innocuous 44-year old man spoke to her, she felt comfortable with him from the outset. He was clean-cut, well-spoken, and clearly educated.

What she could not have known at that time was that it was all a sham. He wasn't Brazilian, he was born in Zurich, Switzerland. He'd made a personal fortune as a gigolo and blackmailer. He had extorted more than $2 million from a number of wealthy older women.  Susanne Klatten was his latest target. Sgarbi's brief conversation with Klatten about the book she was reading began one of the most sinister, calculated, and extraordinary seductions in recent times.

The gigolo was working with an Italian hotel owner by the name of Ernano Barretta, a man who claimed to have healing powers and was the head of a cult. He allegedly helped Sgarbi plan both his seduction and the blackmail that would follow.

Klatten agreed to go for a walk with Sgarbi the next morning. On that fateful stroll through the beautiful Alpine setting of the spa, Sgarbi told the heiress that he was the grandson of a Polish Jew whose family moved to Rio de Janeiro  when he was five. As a teenager he moved to Switzerland to study law at the University of Zurich.  As Klatten grew smitten with the stranger, he continued to spin his tale. He told her he worked for Credit Suisse bank, spoke six languages fluently – these things were true, but he was about to take his story and start fabricating details aimed at luring Klatten into his web of seduction.

Sgarbi told Klatten he was in mergers and acquisitions now. He told her he was an adviser and trouble shooter for the Swiss government. He claimed that the government often sent him on secret missions filled with danger and intrigue. He told her he had gotten married to a Swiss woman the year before but that the marriage had ended and he was heartbroken. That was a lie. He had been married twice, the second time to a member of Barretta's cult. He had a two-year old daughter from that union.

Klatten was a woman who had been counseled her entire life in the extreme need for discretion. Everything about Sgarbi should have made her suspicious. But chemistry and seduction are strange things, and Sgarbi had Klatten's full attention. 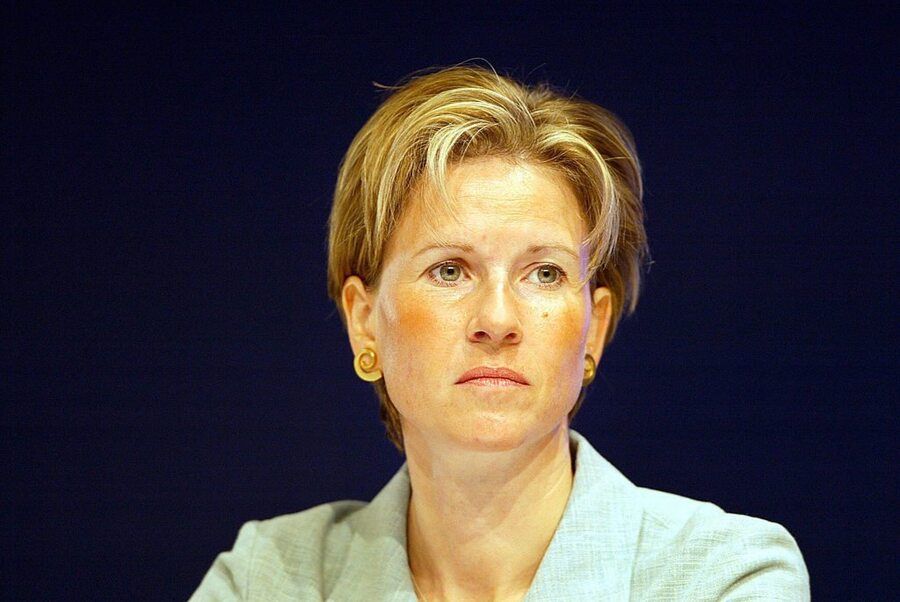 Klatten checked out of the resort three days later to return to her husband and three children in Munich. She was hooked by this time. She gave Sgarbi her private cell phone number, agreed to meet him again, and most shockingly, dropped her usual fake name and told him who she really was.  Of course, Sgarbi acted surprised.  Three weeks later the couple met at a hotel in the South of France, not far from Klatten's family's summer home. They made love for the first time.

The affair between the heiress and the con man escalated quickly. When Susanne returned to Munich in late August, she started meeting the gigolo at a Holiday Inn in the city. To avoid being seen, she went straight up to his room from the underground parking garage.

Less than two months after they first met, in late September, Sgarbi hit Klatten with the "sting" that would eventually cost her more than $10 million dollars and far more in pride. He told her he had to go to the U.S. on one of those secret missions for the Swiss government. He disappeared for a time. When he resurfaced, the game changed. He told Klatten that he'd been in Miami and while there he'd accidently been involved in a car accident that severely injured the young daughter of a Mafia kingpin. The little girl might never walk again, he said. The father, exerting the force of the Mafia, told Sgarbi he was a dead man unless he paid $14 million. Feigning fear, the con man told the heiress that he could come up with almost $3 million by selling off his assets, but would be $11 million short. His life depended on this sum, he said.

Klatten did not fall for Sgarbi's story right away. But then, on September 6, 2007, she asked to see him. He told her the story again. They had sex. She agreed to give him the money. She asked him in what form he needed the money.

Understand that this decision, and, in fact, the whole affair, was completely out of character for Klatten. She was a women who's defining character trait was her sensibility.

In another meeting at the Holiday Inn, the infatuated heiress met her lover in the underground garage and gave him an 88 pound suitcase filled with more than $10 million in cash. She helped him carry the heavy case to the trunk of his rented Audi A6.  Sgarbi kissed her on the cheek and told her he must jet off to the U.S. to pay off the Mafioso immediately. He never mentioned how he planned to get that amount of cash on a commercial flight. Of course, Sgarbi went straight to Barretta's villa to show him the success of their scam.

In a bizarre twist to this story, on September 3, 2007 an hour-long German documentary exposed the Quandt family's ties to the Nazis. The program revealed that Susanne's grandfather, Gunther Quandt, had build a fortune by using slave labor in his factories that made batteries for German submarines during World War II but had managed to escape any post-war recriminations.  The documentary also told of how her grandfather's second wife Magda married Nazi propaganda chief Joseph Goebbels after she divorced Gunther. Adolf Hitler himself was a witness to the marriage. Magda committed suicide with Goebbels just two days after Hitler's suicide in April 1945. She poisoned her six children with cyanide. The documentary destroyed the Quandt's reputation.

At that same moment in time, Jan Klatten asked his wife of 17 years if she was having an affair. Susanne denied it. Her life had become a pile of lies.

Sgarbi reappeared to take advantage of the controversy created by the revealing documentary. He demanded that Klatten invest more than $260 million in an opportunity of his and told her to leave her husband and live with him.

Klatten suddenly recovered her good sense and told Sgarbi that their relationship was over. She packed her bags and returned to the Lanserhof resort and spa to recover.  However, it would not be so easy. A few days later a package was delivered to her via the front desk of the hotel. Inside were pictures of her naked as well as a video clip of her having sex with Sgarbi.  Barretta had placed a recording device in the Holiday Inn room to record both the couple's conversations and sex – creating the perfect tapes to set up their blackmail scheme.

A few days later, Sgarbi called Klatten on her call phone and demanded $45 million, claiming that the money was for his Polish-Jewish grandfather who had worked in one of her grandfather's factories during the war.

Klatten was determined not to be played for a fool again. She took the photos that had been sent to her and went to the German police before going home and confessing everything to her husband.

Sgarbi, meanwhile, was totally unaware of his lover's change of heart and called Barretta insisting that Susanne had too much to lose to not pay up. That over-confidence would be Sgarbi's downfall.

On January 14, 2008, Barretta followed Sgarbi in his car as the two drove to the rendezvous with Klatten at a rest stop on the autobahn not all that far from the Lanserhof resort and spa. However, when the pair of con men arrived, Klatten and her money were absent. Instead, the men were met by a group of the Austrian commando team Cobra, dressed in balaclavas. They were arrested.

Sgarbi the gigolo was taken back to Germany and jail while Barretta was released to return to Italy at the insistence of that country's government.

When Sgarbi finally got his day in court in March 2011, the man who had successfully seduced one of the richest and most reserved women in the world had one surprise left – he confessed his guilt.  This meant that neither Klatten nor any of the other women he'd blackmailed would be forced to testify. The $10 million Klatten gave Sgarbi has never been recovered.

Sgarbi was sentenced to six years in prison – which was half the maximum sentence of 12 years that he could have been given.  Six years is not all that long, especially when you have millions stashed away somewhere. Susanne Klatten returned to her life in Munich, having been forgiven by her husband. At least other wealthy women would be spared being preyed on by Sgarbi.