By Simon Gerard on August 17, 2011 in Articles › Entertainment

Did you try to book a seat on Virgin Galactic's SpaceShipTwo and all the good seats are taken? Instead of paying for that $200,000 ticket, why not save $50,000 and get half-way there in this new space balloon. The "Bloon" is a cheaper, more casual alternative for anyone wanting to hit-up space next spring break.

Going for only $156,000 a ticket, you and 3 friends can float up 22 miles for a nice 2-hour cruise (the SpaceShipTwo is only in space for three minutes. At this altitude you'll get to view the contrast of the darkness of space and the deep blue of our atmosphere. You'll also get to view the curvature of the earth, so you can take an instagram to rub in the faces of your buddies who still think it's flat.

The "Bloon" semi-spacecraft is made up of four parts. It has a sail with a connecting chain to the passenger pod, along with the landing system.  And if you're worried that it'll explode like a zeplin, the bloon is filled with helium, which is not flammable. The connecting chain is more useful than it looks, its fitted with technology to control the vessel, handle rough weather or other emergency situations. It can take four passengers, along with two pilots. The passenger c compartment uses large glass panels for viewing, with an inflatable landing-system to ensure a safe landing.

Please note, unlike Virgin Galactic's SpaceShip Two, which reaches 62 miles, you do not reach zero gravity. So if you were planning on popping some Cristal in zero gravity, you'll have to cough up the extra $44,000 and get on the list, unfortunately. 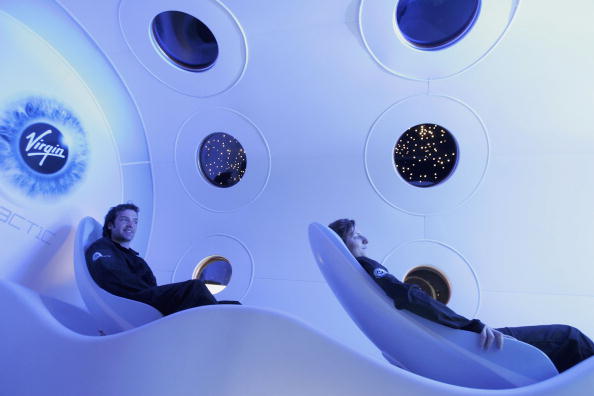 Daniel Berehulak/Getty Images
Did we make a mistake?
Submit a correction suggestion and help us fix it!
Submit a Correction