By Simon Gerard on September 8, 2011 in Articles › Entertainment

These days, owning a yacht is NBD. Like how McDonald's supersized is now large, a mega-yacht is a super-yacht and a super-yacht is now a regular yacht. So what can these poor billionaires do to actually impress their friends? Buy one of these billion dollar themed mega-yachts of course!  Yacht Island Design has designed two themed mega-yachts. The first is "The Streets of Monaco" based on the Principality of Monaco on the French Riviera. The second is modeled after a tropical island paradise.

"The Streets of Monaco" themed mega-yacht

For those not familiar with Monaco, it's essentially the most "balling-est place on earth". A popular tax haven, it is the top vacation spot for the world's richest. It's located on the beautiful French Riviera and is home of the Monaco Grand Prix and the famous Mote Carlo Casino. It's only one square mile big and has the highest GDP in the world, with 2000+ millionaires and 5 billionaires as permanent residents. It has a monarchy with Prince Albert II as head of state. I had the chance to visit a few years back and I can confirm the Bentley Continental GT is their equivalent of a Honda Civic.

So for any billionaires who want to take a slice of Monaco with them, this 500 foot design is just what they need. It's built on a much wider platform than your run-of-the-mill mega-yacht and features actual buildings instead of ship decks. It has three main zones. The "Oasis" is modeled after the gardens of Monaco, which features a full-featued spa and multiple pools and waterfalls, cascading into each other.The "Grand Atrium" is the main living area and suites. Features included a theater, library, casino, dance hall, wine cellar and Havana room. Most suites include their own reception room, dressing room and balcony.

The highlight is the "Streets of Monaco". It has a scaled down version of the Monaco Grand Prix circuit that you can race on with actual F1 style go-karts. Yep, you heard me. It takes you on a tour of other famous Monaco locations, including the Hotel de Paris, Cafe de Paris, La Rascasse Hotel, Loews Hotel and the Monte Carlo Casino. There also is a tennis court and helipad. Yeah there's a bunch of pool with swim up bars and Jacuzzis, you know the regular boring stuff you find on mega-yachts.

It also has two large sea-level garages for smaller yachts, its own submarine and "beach" level decks to let you swim and enjoy the ocean. 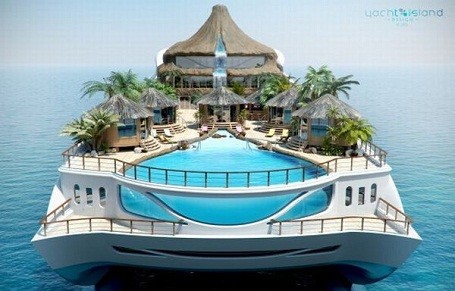 This is their second and smaller theme at 300 feet long. Here you can play the opposite of the Survivor reality show on faux-tropical island with all the luxuries of a mega-yacht.  The main feature is the top deck, which features a cove with cabanas and palm trees surrounding a large main pool. The pool is deep and even allows viewing out the front of the yacht through a large glass wall. The volcano doesn't gush lava, it just creates a waterfall for the pool. 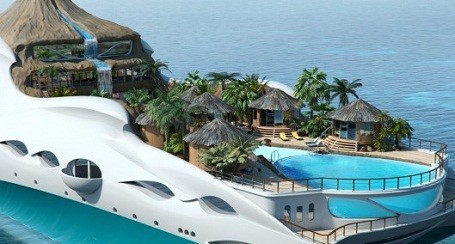 Underneath the pool, there is a recreation area for a assortment of expensive water toys, such as jet skis, kayaks and boats. Another fun yacht toy I'd add for an extra $100k would be the JetLev water jet pack. There is also a obligatory helicopter pad. When I get mine commissioned, my volcano will only flow with Cristal 24/7.

Yacht Island Design has two more designs in the works: one will be Oriental themed and the other Middle Eastern. They also will design a themed mega-yacht to your imagination. Maybe an Inception-themed yacht within a yacht. With the top deck all water with another smaller yacht on top? What kind of theme would you chose for your yacht?