By Amy Lamare on October 19, 2018 in Articles › Entertainment

It really hasn't been all that long since Jessica Simpson was sashaying around MTV in her daisy dukes wondering if Chicken of the Sea was chicken or tuna, but my what a long way she has come! Over the years Jessica has taken a lot of flak from the media for everything from thinking Buffalo wings were made of buffalo, to her weight, to her sense of style. But it is Simpson is getting the last laugh. This former pop princess currently presides over a fashion empire that has generated over $1 billion in revenue.

A decade ago, Jessica's fashion empire began with a simple shoe line. Today the empire includes hats, bags, clothing, and fragrances. Simpson and her mom approve every single last item that will bear Jessica's name. It is a dizzying amount of product that sells more than $1 billion annually. To put that in perspective, that means Jessica Simpson is selling more product than Michael Kors. Along the way, Jessica has managed to stash away a personal net worth of $200 million, the bulk of which comes from her fashion business, not from singing and acting. Here's how she did it all… 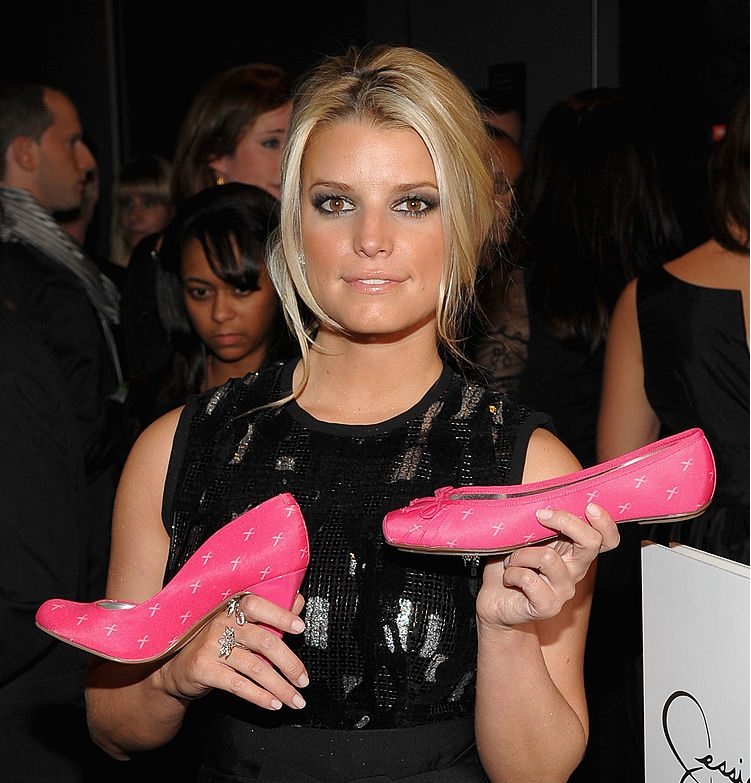 We first became acquainted with Simpson when she shot to fame as a teen pop star nearly 15 years ago. Born in Abilene, Texas in 1980, Simpson is the daughter of a minister. She grew up fully immersed in the ways and culture of the Bible Belt. Simpson started recording gospel albums when she was 14 after someone connected to the music industry had been impressed by a performance she gave at Bible camp. She was a virgin from Texas and famously pledged that she'd remain so until she was married.

In 1999, her debut single, "I Wanna Love You Forever" made the then-19 year old famous. Her debut album "Sweet Kisses" sold over four million copies worldwide. Simpson, Britney Spears, and Christina Aguilera dominated the airwaves alongside boy bands like The Backsteet Boys, NSYNC, and 98 Degrees.

In 2002, Simpson married one of the members of one of those boy bands, 98 Degrees' Nick Lachey. They documented their newlywed days in a reality show on MTV. Jessica came across as lovably clueless, talking about farting, demonstrating her ability to belch the alphabet, and wondering how chickens managed to live in the sea.

Simpson and Lachey split up in 2005. The tabloids went nuts exploiting Simpson's pop culture appeal as she dated a number of famous men including Dallas Cowboys QB Tony Romo and fellow musician John Mayer (who infamously referred to his relationship with Simpson as "sexual napalm"). Then Simpson's weight started to fluctuate. Petite and curvy, it didn't take much for Simpson to gain more weight than the media deems acceptable for famous women.

With all of this going on, it wouldn't be unusual for Simpson to lose focus. She didn't. While all the attention was on her love life and weight, Simpson was working quietly behind the scenes building Jessica Simpson the Brand.

Simpson started with shoes. A decade ago she launched a shoe collaboration with Nine West founder Vince Camuto. She wanted to sell shoes like she wore. The shoes sold like hotcakes and continue to do so. So Simpson kept branching out. She did hats. She did clothing—everything from party dresses to career separates to coats. She sells accessories and fragrances. Simpson doesn't market just to young women either. Her style and brand appeal to women of all ages. She will dress your grandmother in jeggings and put 5-inch platform heels on your 45-year-old aunt. She believes women should dress in what they feel good in.

Simpson's line is remarkably wearable. She peddles the kind of dresses that look just as good on a college co-ed as they do on a 35-year old career woman. Her line is stylish and on trend and classy. It is priced reasonably And this is why it succeeds and why Jessica Simpson is presiding over a billion-dollar fashion business today.

As a rule, celebrity clothing lines fail more often than they succeed. Sarah Jessica Parker's Bitten line got tons of press and was much anticipated but it failed quickly. Lindsay Lohan's line of leggings also failed rather spectacularly. Others that succeed, like Victoria Beckham's line of tiny dresses, are insanely expensive and marketed towards, well, towards Beckham's friends, not your average woman in Nebraska. Simpson's line not only succeeds, it fills that void. She's never been about being snobby or too good for the masses—one episode of her old MTV show Newlyweds: Nick and Jessica will tell you that. At the end of the day, a woman can go to the mall and buy a Jessica Simpson outfit and still have money left over for lunch with her friends at Applebee's.

Simpson's straightforward approach to her fashion line is a lot like how she handles life. She's real and down to earth despite how the media has dogged her and tried to embarrass her. It's a formula that works for her.