Bill Cosby Net Worth: How The Comedian Earned His Fortune And How It Could Get Completely Wiped Out

By Brian Warner on April 26, 2018 in Articles › Entertainment

This is breaking news as I type – A jury in Pennsylvania just found Bill Cosby guilty of sexual assault. He faces 10 years in prison. In case you aren't familiar with the details, dozens of women have accused Mr. Cosby of sexual assault. The jury deliberated for just one day. This particular case involved just one of the women's accusations but 5 women testified against. His first trial ended in mistrial. Cosby was charged with three counts of aggravated indecent assault. He was found guilty on all three counts. Cosby now faces a maximum of 10 years in prison. Bill also faces dozens of civil lawsuits from the remaining women accusing him of abuse and defamation. These civil lawsuits have the ability to wipe his fortune away.

Before these allegations surfaced, we all knew Bill Cosby as one of the most famous comedians and TV stars of all time. Even before he created The Cosby Show, he was one of the highest-earning celebrities on the planet. So much so that when his album contract was up in 1968, Cosby turned down a five-year $3.5 million contract (that's the same as $25 million today) to launch his own production company. He started pumping out his own comedy albums and would eventually go on to create the TV shows Fat Albert and The Bill Cosby Show (not to be confused with the sitcom of the 80s).

As we know, it was the long-running success of The Cosby Show that would turn Bill into one of the wealthiest people in the entertainment industry. The show ran from 1984 to 1992.  and at the peak of the show he was earning $4 million per episode (the same as $8 million today). In the last two decades alone, the show has generated over $1.5 billion from syndication. As the owner of 20% of the show's profits, he has earned at least $300 million from syndication deals alone.

His real estate portfolio is worth over $100 million. He has large properties in Pennsylvania and Beverly Hills.  His estate in Beverly Hills alone could be worth as much as $60 million based on comparable recent sales. Potentially closer to $80 million.

When you add it all up, we estimate that Bill Cosby's current net worth is in the range of $400 million. 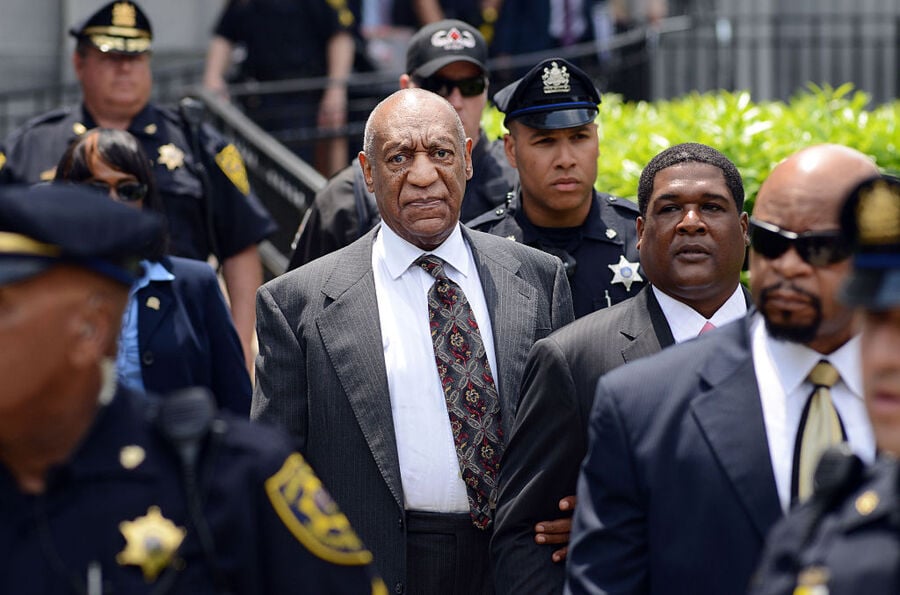 The sex assault accusations have already put a dent in Cosby's earnings. His endorsement deals are gone and his live shows are not really happening anymore. But worst of all, those extremely lucrative syndication deals have completely dried up. Prior to these trials, The Cosby Show was still airing multiple times a day on BET and TV Land. Both networks have dropped the program and syndication deals need to be renewed every 5-ish years. When they are up for renewal, they are basically bought all over again. This is why Jerry Seinfeld and Larry David seem to make $200 million every couple years. No one is buying Cosby re-runs anymore. Also, a new family sitcom was in development at NBC and a Netflix special was canceled.

Interestingly, Bill's legal defense costs (which will easily run in the tens of millions) are actually being covered by his insurance company AIG. AIG initially tried to remove itself from liability but in November 2016, a judge ruled in Bill's favor for the costs of his legal trial. AIG is not on the hook for any damages above and beyond legal defense.

As we alluded to earlier, the biggest threat to Bill's fortune are the civil lawsuits he faces from other accusers. If you recall from your OJ Simpson history, civil cases are much easier to prove. Juries just need a simple majority as opposed to all or nothing. Civil trials can't send someone to jail, but they can levy massive financial damages. OJ was ordered to pay the Goldman family $35 million which was exponentially more money than OJ had at the time and forced him into bankruptcy. Gawker was ordered to pay Hulk Hogan $140 million which put them out of business permanently.

Bill's massive wealth will have a major impact on the damages that are awarded. According to Florida sex abuse lawyer Brad Edwards:

"Any jury assessing this starts with, what amount of money punishes him given his net worth? Even if you said $20 million, you're talking about a fraction of his net worth."

And it's not just one lawsuit. It's at least 8, potentially 20 or more depending on which accusers are deemed to be credible. That's what is keeping Bill Cosby up at night.