The Biggest Pop Star in Japan Right Now Is A Hologram. A Hologram Who Sells Out Stadiums Full Of Real People.

By Paula Wilson on July 20, 2014 in Articles › Entertainment

When it comes to weird inventions, Japan seems to have cornered the market.  In fact, they even have an entire category of products known as Chindogu, or products invented just to see how wacky the creators could be.  Japan is a leader in product research, so even when the inventions are completely bizarre (floor-dusting baby onesie, anyone?), they do actually seem to serve a purpose.  One of the more interesting inventions to come out of Japan in recent years, is the Hatsune Miku voice synthesizer created by Crypton Future Media.  Originally created simply to act as a synthesizer, Hatsune Miku has grown into a world-wide holographic phenomenon, with millions of fans.  During its first year, in 2007, it became the #1 selling software in Japan, and racked up sales of 57.5 million yen (approx. $600,000) in that year alone.  A true "cyber celebrity", possibly the first of its kind, Hatsune Miku has become one of Japan's most successful inventions, and a cottage industry unlike any other. 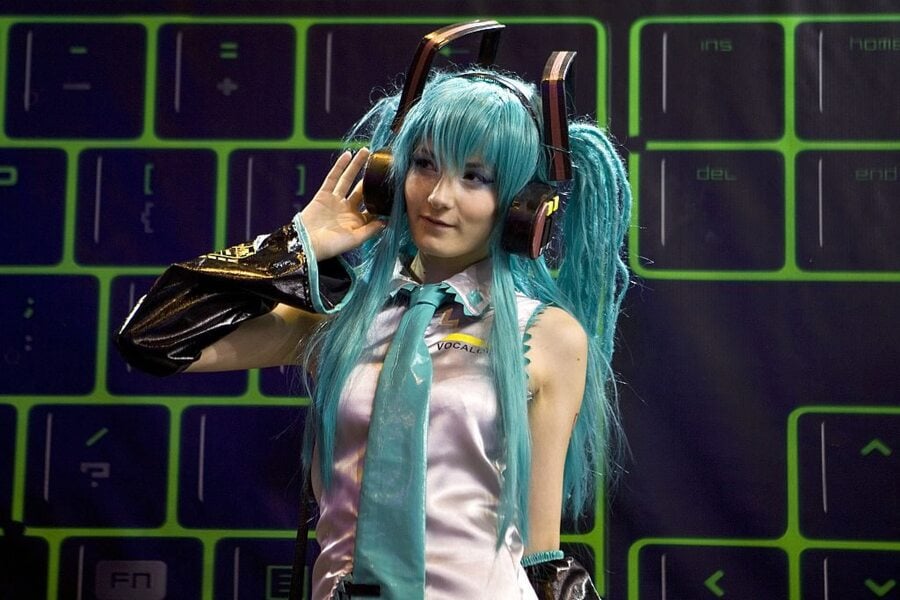 First released in 2007, Hatsune Miku was created using Yamaha's Vocaloid 2 and Vocaloid 3 programs. The designers used multiple voice samples from Saki Fujita, a popular Japanese voice over artist.  They chose their samples very carefully, so that each sample had a Japanese or English phonic.  When the phonics were combined, they could create words, phrases, and song lyrics.  All of the samples became the sonic foundation for a keyboard type instrument, and pitch could be altered through the synthesizer program.  The company chose the name Hatsune Miku because the name merges the Japanese characters for "first", "sound", and "future" – signifying "first sound from the future".

In the past, Vocaloid programs had gone the sonic route only.  It was a huge departure to create a visual representation of the Vocaloid program.  Crypton Future Media was uncertain if it would have an impact on sales, but they decided to go for it anyway.  In order to market the program, Crypton created an "android diva" persona with a backstory about a near-future world where songs had been lost.  They turned to popular manga artist, Kei Garo, to create a visual that would appeal to the audience of professional producers at which the program was aimed.  He was given two guidelines – the coloring used had to be the colors of the synthesizer program, and she had to be an android.  He came up with a slim figure in a futuristic school-girl outfit with long turquoise pigtails.  The character has her own profile.  She's a 5-foot, 92-pound, sixteen year old girl, born on August 31st.  Her favorite musical genres are listed as Japanese Pop (J-Pop) and Dance Pop.  As she is a musical construct, the company also lists her favorite tempos as anywhere from 70 – 150 BPM and her vocal range from A3 to E5. Check her out in concert:

While Yamaha provided the framework on which the program was built, they have only been involved in marketing the program and cyber figure peripherally.  Instead, most of the marketing has fallen to the development teams for Vocaloid, and her popularity has outpaced their wildest expectations.  The entire Vocaloid phenomenon, of which Hatsune Miku is just one example, has become incredibly lucrative.  Crypton Future Media is at the forefront of Vocaloid promotion, and the company has collaborated with a number of famous brands.  Hatsune Miku has been part of a major marketing campaign with the GT300 since 2008.  Crypton and Good Smile Racing have sponsored multiple racing teams, as well.  Along with a number of other Vocaloid characters, who make up the Character Vocal Series, Hatsune Miku artwork has appeared on race cars for Studie, Team MOLA, and Team COX.  In addition to endorsing cars, the Hatsune Miku image has been used to promote the Toyota Corolla and in promotions for Sapporo, SEGA, and Google Chrome.

What has driven her popularity more than anything, has been user response.  When the program was first released, Crypton actually couldn't keep up with demand.  They had a waiting list of 3,000 by the 12th day that the program was on sale back in 2007.  After the program was first released, producers began posting short multi-media videos of songs they'd created using the program to Nico Nico Douga, the Japanese equivalent of YouTube.  Soon Nico Nico Douga users began collaborating, creating original music videos and other content featuring Hatsune Miku's image.  Her popularity grew so much, that a petition was created to send her image into space.  It ended up receiving 14,000 signatures, and on May 21, 2010, three aluminum plates featuring her image were launched into space on the Akatsuki spacecraft explorer.  To date, there have been over 1 million images of her created by fans.  Over 170,000 videos featuring her image have been uploaded to YouTube, and 100,000 songs featuring her have been released.  She has nearly 1,000,000 fans on Facebook.

In 2013, Crypton released an English-language version of the software, and her popularity increased exponentially.  The growth of user created content was spurred by Crypton's decision to adapt "Creative Commons License CC BY-NY", so that it became legal for users to create as much original content, using her original image, as they wanted.  She is viewed as her own musical entity, and has released albums and singles as a music artist.  Her album, "Exit Tunes Presents Vocalgenesis feat. Hatsune Miku", became the first Vocaloid album to chart at #1 back in 2010.  She has since gone on to perform sold-out live concerts in Asia and the United States, including a gig at Los Angeles' Nokia Theater in 2011.  She was the star of a Vocaloid opera called, "The End", that only used Vocaloid performers.  Written by Keiichiro Shibuya, and designed by famed artist, Louis Vuitton, the opera premiered at the Chatelet Opera House in late 2013 to surprisingly strong reviews.  Since then, she has also opened for Lady Gaga's "ArtRave: The Artpop Ball" tour, and been featured in Pharrell Williams' remix of "Last night, Good night" by Livetune.

No one quite knows how far the Hatsune Miku phenomenon will go.  There's been nothing like it before.  Her community of fans and followers just keeps growing and growing.  She is definitely one of the most successful inventions to come out of Japan in years.  Her live concerts are both stunning to look at and genuinely eerie.  She's a hologram and her vocals are being played on a keyboard, but for a couple of hours, to a couple thousand people, she is as real as you or I.  If that's not a totally futuristic concept, it's tough to know what is.