Behold! These Are The Most Popular Videos And Channels On YouTube…

By Paula Wilson on January 16, 2015 in Articles › Entertainment

What is it about some videos that makes them so popular? If you watch all of the most popular videos on YouTube, you'll discover there is strangely little about them that provides an easy answer to that question. What seems to strike our collective fancy is actually kind of weird. Not only that, but it changes, sometimes drastically from week to week and even, day to day. Here's a quick rundown of the Top 5 music videos, the Top 5 non-music videos, and the Top 5 channels on YouTube as of January 2015. If you ever wanted concrete proof that our tastes are fickle, these lists will give it to you. Prepare to be amazed… and confused.

With 777 million views, "Party Rock Anthem", made LMFAO, an EDM rap duo, bona fide stars. The single sold almost ten million copies and went to #1 in 12 countries, including the US, when it was released in 2011. So, of course, the duo went on hiatus and hasn't released anything since.

Jenny from the Block just keeps reinventing herself. She's like the Latin answer to Madonna, but with marginally better acting skills. "On the Floor" was the first single from Lopez's seventh studio album, and it has sold over 3 million copies since its release in 2011. It has racked up 794 million views on YouTube.

Uploaded in 2010, Eminem and Rihanna's "Love the Way You Lie", struck a chord with just about everyone who'd ever been in an ugly relationship. It also helped that the highly controversial video starred Dominic Monaghan and Megan Fox, making for a mismatched, but strangely attractive pairing. It has racked up 795 million views.

As a friend of mine once yelled while watching Justin Bieber give an interview – "You are not hard – Canadian!". However, the Biebs keeps trying, and people keep watching his videos and buying his songs in droves. "Baby" has racked up a blistering 1.12 billion views, since it was uploaded to YouTube on February 19, 2010.

"Gangnam Style" was everywhere for most of 2012 and early 2013 and has racked up a record setting 2.2 billion views.  Beyond the sheer number of people who have watched the video (and counting), it's sort of mind-blowing to realize that the video forced Google to rewrite the YouTube counter code to accommodate the number of digits. Less than 3 billion people in the world have access to the internet and 2.2 billion of them have watched "Gangnam Style". Sit with that for a moment. 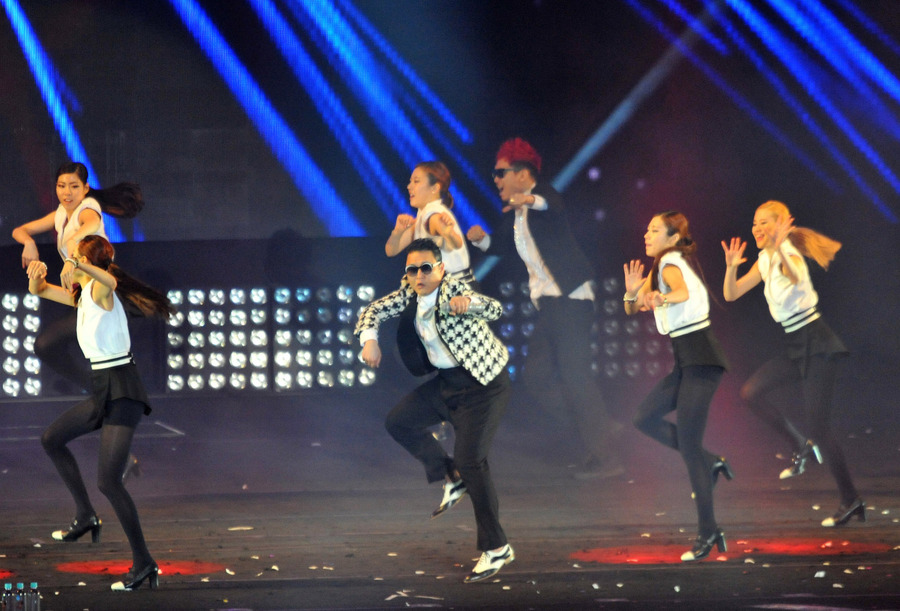 30 minutes of catchy songs and rhymes for teaching little kids colors. You can almost hear the collective sigh of parents clicking on the video, plunking their child in front of it, and feeling like they can have 30 minutes to get something around the house done, uninterrupted. It's racked up 305 million views.

This is a video about the pieces of the Play Doh Ice Cream Cupcakes playset and basically features a set of adult male hands, and later a set of teenage girl hands, using these pieces, with Play Doh. Also, it's an hour long. It has 311 million views. Apparently, a lot of people like watching hands play with Play Doh to the accompaniment of elevator music.

"Masha and the Bear" is a Russian children's cartoon series with excellent production values. For some reason, Episode 17 has struck a chord with everyone, (even if you don't understand Russian). It's racked up an impressive 406 million views since it was uploaded in 2012, based almost entirely on the fact that it's just ridiculously cute.

An animated owl gazes longingly at the moon, while a child's voice sings "Twinkle, Twinkle Little Star". Granted, one could argue that this is a music video. However, it's not exactly in the same vein as the kind of video making coming from LMFAO or Jennifer Lopez, so it's probably safe to place it here. It's racked up 434 million views.

This is a total mystery. Uploaded in 2007, this home video of a toddler biting his slightly older brother's finger until his brother gets upset, has been viewed by over 808 million people. It's the third most watched video, of any type, in YouTube's history.

The 5 Most Subscribed Channels on YouTube – (as of January 2015)

Yep. YouTube's own YouTube Spotlight channel is the 2nd most subscribed channel on YouTube. How's that for meta? The channel's only real purpose is to spotlight popular videos on YouTube, but that's enough to have propelled it to 22.1 million subscribers.

Germán Alejandro Garmendia Aranis is a 20-something Chilean comedian who has taken the interwebs by storm. Originally interested in a career in music, Aranis uploaded his first YouTube video in 2011, and was subsequently forced to to leave his band because of his online popularity. He's become so popular in fact, that when he made an appearance in Mexico City in the spring of 2014, the crowd so exceeded capacity that multiple injuries were reported and he was forced to cancel at the last minute. His channel has 20.8 million subscribers.

Smosh is the work of two sixth-grade buddies. Originally created by Anthony Padilla as a flash animation website in 2002, Smosh became a YouTube channel after he invited his childhood buddy, Ian Hecox to join the venture. They began uploading videos of themselves singing popular game and animation theme songs, and the channel grew from there. They now have skits, a food series, a comedy series, an interactive series, gaming, and a host of other projects. They've branched out into other YouTube channels and are currently developing a feature film with Lionsgate. The channel has 19.5 million subscribers.

In the music world, Rihanna is officially a force of nature. Not only is she the most digitally downloaded artist in the US, she's also got the most YouTube subscribers of any musical artist. Her Vevo channel is the go-to spot for 15.1 million subscribers. She beats out One Direction and Justin Bieber. Maybe there is hope for the world after all.

Also known as Felix Kjellberg, PewDiePie is a Swedish gamer who has been sitting atop the most popular channel list for quite a few years. His channel is considered the one to watch when it comes to gaming reviews, and he's actually credited with influencing game designers to create games that are as much fun to watch as they are to play. He gained nearly a million new subscribers in December 2014 alone. He currently has over 33 million subscribers and earns approximately $7-10 million per year from endorsements and ad revenue. 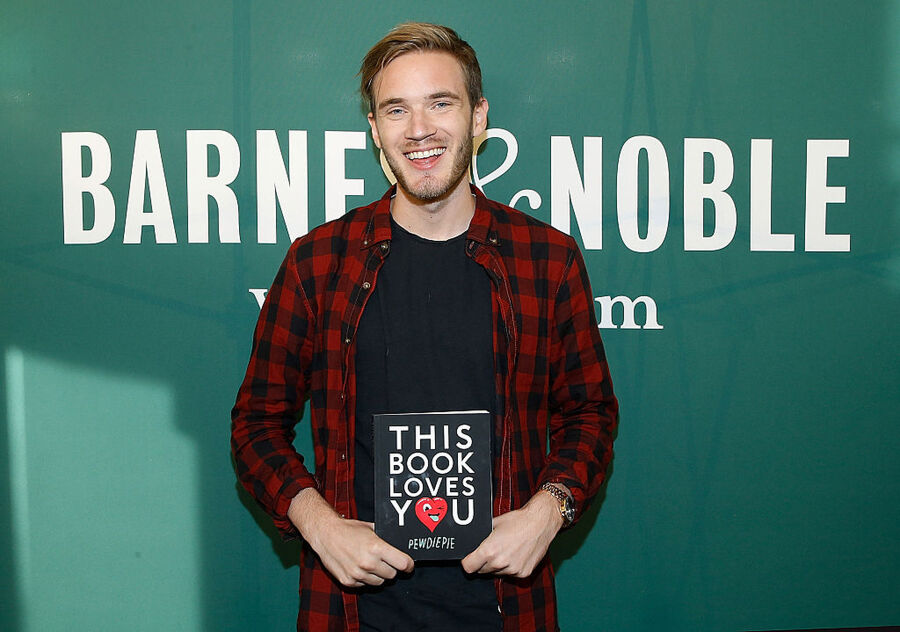 The duo's popular morning show, "Good Mythical Morning", has elevated them in the subscription rankings. A cross between a variety show and a talk show, the online program is gaining as many as 30% more fans each month. They currently have 5.43 million subscribers and are hot on the heels of Markiplier.

The tiny, cute pop star, and Nickelodeon alum, is well on her way to giving Taylor Swift a run for her money when it comes to subscriptions. Her rather more adult style has her pulling in a slightly larger demographic than Miss Swift, so their rankings may very well be reversed by the end of 2015. She currently has 5.5 million subscribers. 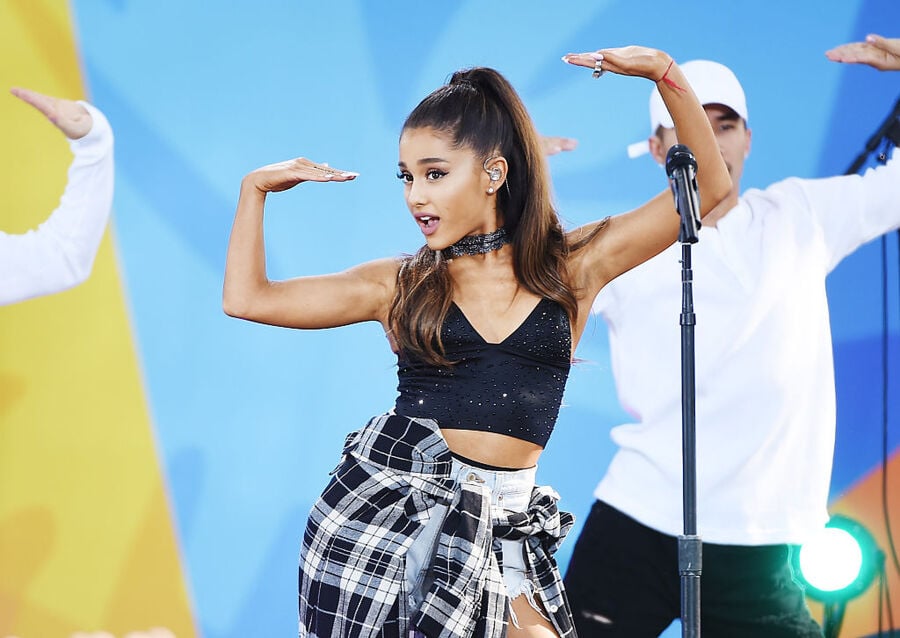 Taylor Swift is the 15th most subscribed channel on Youtube right now. There is an entire generation of young women who have grown up with the singer-songwriter country-crossover serial dater, and those folks are loyal. Her Vevo Channel currently has over 10.7 million subscribers.

So there you have it. Apparently, we all like little kids, nursery rhymes, watching people play games, pop songs in a variety of languages and with a variety of themes, and Play Doh. It takes all kinds to make the world. If nothing else, YouTube proves that.