Banksy Destroyed One Of His Paintings The Moment After It Sold For $1.4 Million – In The Most Hilarious Way Possible

By Joseph Gibson on October 8, 2018 in Articles › Entertainment

There's a long, illustrious tradition in the art world of famous artists playing expensive pranks on their wealthy and often oblivious patrons. The artist known as Banksy took part in that tradition recently, at the high priced auction for one of his Girl with Balloon paintings. It happened at Sotheby's in London, when the Banksy work was the last to be bid on, and eventually sold, for a grand total price of $1.1 million. Then, after the hammer fell, the painting entered the final phase of its creation by falling into a shredder built into the frame, reducing it to ribbons as everyone in the gallery looked on.

Alex Branczik is Sotheby's head of contemporary art, Europe, who is quoted by The Art Newspaper as saying "It appears we just got Banksy-ed," after the painting was destroyed. He also claims that he's "not in on the ruse," but the paper says it's "unclear" whether Banksy had another inside man to help him pull this prank off, or if he was somehow able to arrange it all on his own. Here's an Instagram post that shows how the painting look before its fate was sealed:

A post shared by Casterline | Goodman Gallery (@casterlinegoodmangallery) on Oct 5, 2018 at 1:14pm PDT

Branczik, as you might imagine, had a lot more to say about this unprecedented artistic event:

"We are busy figuring out what this means in an auction context … The shredding is now part of the integral art work. We have not experienced a situation where a painting has spontaneously shredded, upon achieving a record for the artist." 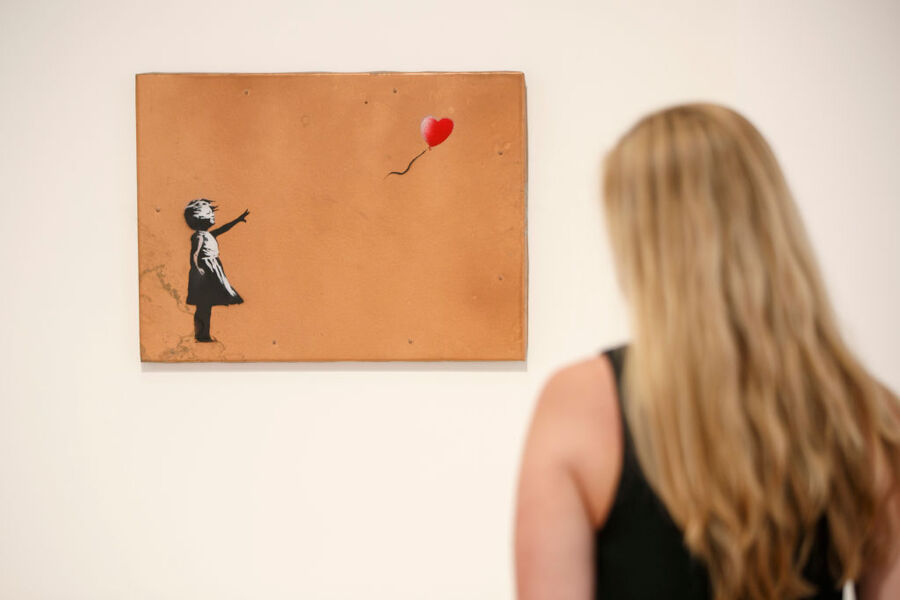 And, in what might be seen as contrary to Banksy's ends, Branczik says that the painting (of a similar design to the one seen above) may indeed now be more valuable than it was before it was shredded:

"You could argue that the work is now more valuable … It's certainly the first piece to be spontaneously shredded as an auction ends."

Banksy himself made a highly entertaining document of the prank from his own Instagram account, and you can check it out for yourself below:

. "The urge to destroy is also a creative urge" – Picasso

Banksy's literally destructive prank appears to have been a big hit with the public, with even Bloomberg calling it "economic genius." So he may have to work harder than ever if he wants to top it in the future.