The Bad News? Your Fiance Lied About Her True Identity. The Good News? She's Secretly One Of The Richest Women In The World.

By Amy Lamare on August 7, 2014 in Articles › Entertainment

Getting engaged can be a tricky proposition (literally) if you've ever been less than 100% honest about anything to your future husband or wife. Once you're engaged, you really better come clean about every lie you've ever told, no matter how seemingly insignificant. Maybe you weren't actually virgin before meeting your fiance. Maybe your nose isn't your real nose. Maybe you've been pretending to love the Giants but you secretly bleed Dodger blue. Or, worst case scenario, you find out your fiance's entire life is a lie. Maybe everything she's told you about her family history, including her last name and early life, is a complete sham. That would be a pretty devastating revelation, right? Well, this is exactly what happened to a German engineer named Jan Klatten while he was working at BMW in the mid 1980s. Jan fell in love with a cute young intern named Susanne Kant who hadn't been totally honest about her identity. On the bright side for Jan Klatten, his fiance was actually Susanne Quandt, the multi-billionaire heiress to BMW and one of the richest women in the world…

Susanne Hanna Ursula Quandt was born on April 28, 1962 in Bad Homburg, Germany. She is the daughter of Herbert and Johanna Quandt (a former secretary at BMW's corporate headquarters). Her father was the legendary German industrialist who made BMW the luxury-car giant it is today.  When he died in 1982 Herbert left his entire fortune, including the majority ownership stake in BMW, to Susanne, her brother Stefan and their mother Johanna.

After she finished high school, Susanne went to Frankfurt to study business and economics. While she was already a very wealthy young woman, Susanne didn't go the pampered heiress route. She kept at her education, taking courses in marketing and management at the University of Buckingham, and then getting an MBA from the IMD business school in Lausanne, Switzerland with a specialization in advertising.

Most of Susanne's knowledge and business savvy comes from the positions she held in the years following her schooling. Instead of becoming a typical trust fund baby, Susanne worked for the advertising agency Young & Rubicam in Frankfurt for two years in the early 80s before going on to the University of Buckingham and IMD.  She also held a number of hands-on internships in her family's business empire. She gained further business experience in London with Dresdner Bank, the Munich branch of management consultants McKinsey as well as the bank Reuschel & Co.  In many cases of her employment, whether in a family owned company or not, she worked under the assumed name Susanne Kant so as not to receive special treatment. Susanne always wanted to be approached and treated on her own terms, not those dictated by her inherited wealth. 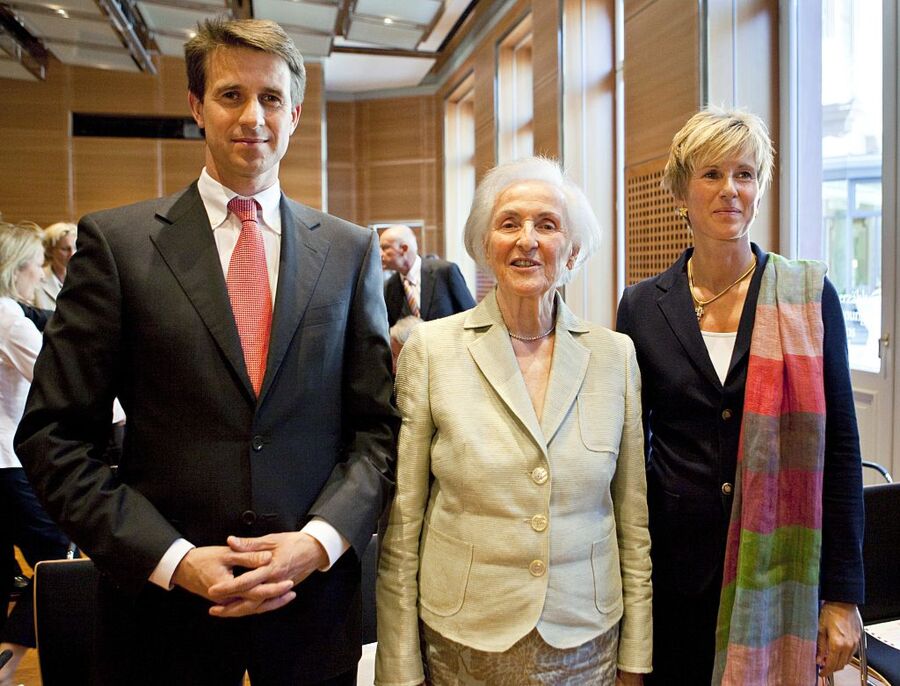 And so it happened one day during the 1980s while Susanne "Kant" was working as a trainee at the BMW factory in Regensburg, Germany, that she met one of the company's engineers, Jan Klatten. The two instantly felt a connection and soon were going on dates. Jan had absolutely no idea Susanne Kant was anything other than a 20-something intern at BMW. He had absolutely no clue that she was not only an extremely wealthy heiress. Not only that, but as one of the three majority owners of BMW, technically speaking, Susanne was Jan's boss', boss', boss', boss', boss.

Not surprisingly, even as the got to know each other better and began dating exclusively, Susanne continued using a fake name because, in her own words: "I wanted to find out if he really loved me."

Well apparently he passed the test because Susanne and Jan married in 1990. After the wedding, Susanne and Jan briefly moved to Boston where she took up another internship. Upon their return to Europe she began taking seats on a number of corporate boards within her family's empire.

In 1993, Susanne joined the board of Altana, a pharmaceutical and chemicals manufacturer that she personally owned 50.1% of. She is credited with transforming the company into a world-class corporation with $2-4 billion in annual revenue today. In 2009, she bought up all the outstanding shares of Altana that she didn't already own.

In 1997, Susanne and her brother Stefan took their mother's place on the BMW board. Today, Klatten focuses her energies pretty much exclusively on BMW.  She was integral in the controversial 2000 buyback of Rover as well as the removal of former BMW CEO Bernd Pischetsrieder when the company hit the skids. Long ago, Susanne's father saved BMW from bankruptcy and with the Quandt family at the car maker's helm, the company has fared very well.

During World War II BMW's fortunes were up largely because of forced labor. The car manufacturer forced prisoners to work in miserable conditions. Today, Quandt family foundations have donated millions of dollars to charities that support those former forced laborers and their families.

When their mother dies some day, Susanne and her brother Stefan be the majority owners of BMW. At that point, each Quandt sibling will be worth $30-$40 billion dollars.

Susanne Klatten leads a very private life. She is rarely interviewed and almost never seen in public. When she was 16 years old she was nearly kidnapped and there is speculation that this event is directly responsible for her need to live an exceptionally private life.  Consequently, not much is known of her personal life except that she, her husband, and three children live in Munich.

What is known about her personal life was revealed in a scandal that started in 2007 and seemed very out of character for the successful and intelligent German heiress. But that's a story for another day and time…

For now, the moral of the story is, if you find out your fiance has been lying to you about his or her true identity, it might be a good thing! Especially if it means you're about to marry into one of the wealthiest families on the planet!