By Simon Gerard on September 9, 2011 in Articles › Entertainment

If you haven't caught up in the wave of hype across Twitter, Facebook and the Blogoshere the legendary Nike sneakers Marty McFly wears in "Back to The Future II" are officially, for real, actually back from the future!! Yeah I had to make the lame reference joke, only because I've been waiting to use it for 20 years. Since the Back to The Future movies were first released to today, this trilogy has held a special place in people hearts. As a senior member of Gen Y, seeing these movies when I was a child were among my favorite pop culture memories.

When the sequel came out in 1989, where Michael J. Fox's charater Marty McFly traveled to the future, it captured the imagination of a generation. Seeing it as a kid was great and watching it again when you older it's even better. The future world of 2015 that director Robert Zemeckis and producer Steven Spielberg was full of great references to the then present 80s and earlier, as well as delivering the future we all wanted to see. Flying cars, the hoverboard, the 3D Jaws movie billboard and of course, the self-lacing Nike hi-tops Marty wears.

Over the last 20 years since the sequel's release, fans have always dreamt of the day the hoverboard and the self-tying Nikes became a reality. For the Nikes, there have been several sneakers inspired by Marty McFlys sneakers, but none were official or did the movie version any justice. Now, in 2011, four years before the future world depicted in the movie, the Nike Air Mags have finally appeared. 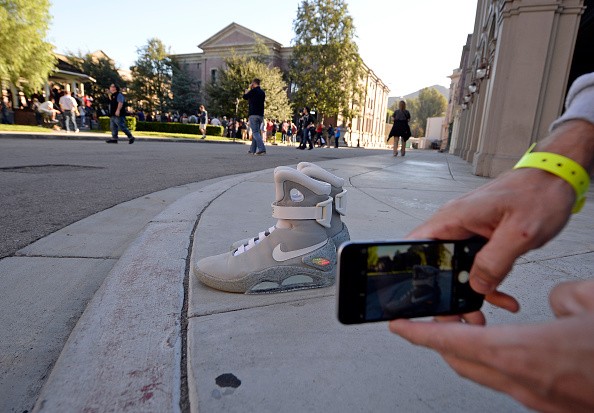 On September 7th, several top authorities in the sneaker world received a special package hinting at the release, along with a Youtube video showcasing Marty McFly's closet, stacked with Nike Air Mags. The package contained an iPod Shuffle with a message from Doc Brown from the movies, saying "Welcome to Los Angeles. If my calculations are correct, over the next 24 hours you are about to see some SERIOUS SH*T!".  Just like in the movies, where he would always send Marty messages from different time periods. It included the Back to The Future trilogy, a selection of 80s candy, Throwback 80s Pepsi and a pair of metal wrap glasses Doc Brown wears in the movie.

There were 1500 pairs of the Nike Air Mags made, with them going up for auction on eBay last night. Nike will be auctioning off 150 a day for ten days, with all proceeds going to benefit The Michael J. Fox Foundation, which supports Parkinson's disease.  Unfortunately, these Nike Air Mags do not auto-fasten like in the movie. They are Nike's first rechargeable pair of sneakers, with 80s futuristic LED lights and an illuminated Nike symbol.

A great move by Nike, satisfying the legions of sneakerheads and Back to The Future fans who have been waiting for this day for over 20 years, while benefiting a great cause. The first pair sold went for $37,500 to British Rapper Tinie Tempah, who also got a plutonium carrying case and was promised a puppy by the auction host. Tinie Tempah is not that well known here in the States, but is big in the U.K. and has a net worth that can afford the first pair. The remaining bids for the first day are averaging at about $6,000 right now, so I don't think I'll be picking a pair up. There would make the perfect pair of work shoes for blogging here at Celebrity Net Worth.

Are you as excited as me and all the fans about this release? Would you drop thousands on a pair? Are you upset they don't actually auto-lace up and have to wait till 2015 like in the movie? Let me know in the comments below:

Hoverboard Update: So after some serious googling, I have discovered The Hoverboard Program! Launched earlier this year through an angel-investment by Stafford Green and the Coca-Cola Content Factory in Europe. Right now, not much info has been released in this new project and almost no media coverage. The Hoverboard Program aims to create a hoverboard "by openly connecting the ideas of a digital community with the energy of corporate design, skate, marketing and engineering firms".

The goal is to invent the hoverboard by  by "4:29pm on the 21st of October 2015". That is the exact date and time that Marty McFly traveled to in "Back to The Future II". Just like with the Air Mags, we're going to have to wait and see if this is a real experiment or PR stunt. Considering the lack of publicity, it doesn't seem like much of a stunt. There are some mock-up ads and can designs already made for Coke Zero in Europe. They are hiring though, if you have a degree in both marketing and engineering, you could do your part to make the hoverboard a reality!

Check them out at TheHoverboardProgram.com

Nike Air Mag Auction Update: The ten day auction to sell 15oo pairs has ended, raising just under $5.7 million for the Michael J. Fox Foundation! And remember, Sergey Brin from Google pledged to match all donations to the same foundation, meaning that that amount effectively doubles thanks to him! Respect to Nike, Brin and the fans for coming together to raise a huge amount of cash for a great cause.