By Amy Lamare on April 7, 2021 in Articles › Entertainment

Shaquille O'Neal spent the first $1 million he made from the NBA within 30 minutes of receiving the check. You read that right. Shaquille O'Neal spent one million dollars in 30 minutes. He hadn't even played in a professional basketball game yet. Shaq may be a living basketball legend today, but once upon a time he was a 21 year old newly drafted NBA player fresh out of LSU who blew through money like it was going out of style. He very easily could have gone the way of so many other bankrupt and in debt athletes who, showered with money and fame at an early age, blow their wealth rather than build upon it.

Fortunately for Shaq, two things happened next: #1) His banker immediately called him up in a rage, warning Shaq that he would end up like so many other athletes –FLAT BROKE – if he didn't get his life under control. #2) Shaq listened.

Many young athletes might have ignored the banker's advice, but Shaq didn't come with any attitude of entitlement. When he was told to shape up, he actually listened, making him a rare breed of professional athletes. In fact, even though Shaq left LSU early for the NBA, he eventually returned to college to complete his Bachelor's degree. He also eventually earned an MBA. Most recently, Shaq earned his Ed.D. That's right; he is now Dr. Shaquille O'Neal. Pretty cool, eh? 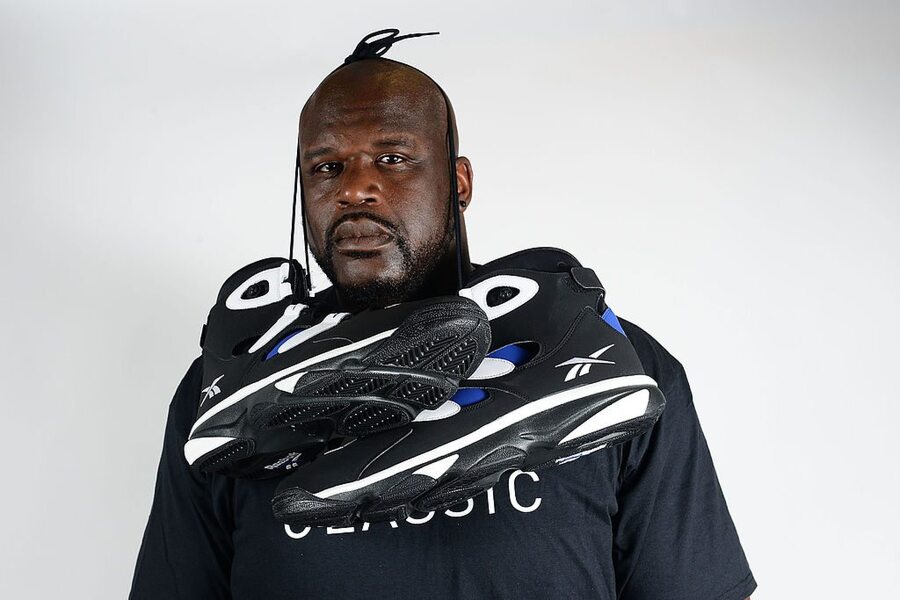 Shaquille Rashaun O'Neal was born March 6, 1972 in Newark, New Jersey, where he grew up with his mother Lucille O'Neal and stepfather Phillip Harrison. By the time we was in high school, his family had relocated to San Antonio, Texas. He led his high school team to a 68-1 record in his first two years, helping the team win the state championship during his senior year. In 1989 he had 791 rebounds, which remains a state record to this day.

At 7'1″ tall and 325 pounds Shaquille O'Neal is one of the biggest men ever to play in the NBA. His size didn't scare scouts or teams and he was drafted first overall in the 1992 NBA Draft by the Orlando Magic and almost instantly (and for the entire 19-year span of his NBA career) became one of the best centers in the league, personifying the big man in the middle. He won Rookie of the Year in 1992-93 and led the Magic to the 1995 NBA Finals. In 1996 Shaq signed as a free agent with the Los Angeles Lakers where he helped lead the team to three consecutive NBA championships in 2000, 2001, and 2002. He was traded to the Miami Heat in 2004 and won his fourth NBA championship with them in 2006. He retired in 2011 after spending time playing for the Phoenix Suns, Cleveland Cavaliers, and Boston Celtics.

Although he is one of the greatest basketball players of our time, Shaq made a promise to his mama when he left LSU early that he would return to school to complete his undergraduate degree. He did that in 2000 and his coach at the time, the Lakers' Phil Jackson, allowed O'Neal to miss a home game so that he could attend his graduation. He famously told the crowd at his graduation ceremony "now I can go and get a real job." O'Neal earned his MBA online through the University of Phoenix in 2005, and about that he said:

"It's just something to have on my resume for when I go back into reality. Someday I might have to put down a basketball and have a regular 9-to-5 like everybody else."

As he neared the end of his playing career, Shaq began work on an Ed.D. at Barry University in Human Resource Development. His doctoral thesis topic was "The Duality of Humor and Aggression in Leadership Styles". (Oh how I'd like to read that!) Shaq received his degree, becoming Dr. Shaq in 2012. He has said he plans to attend law school next.

After 19 seasons in the NBA, O'Neal retired in 2011. He was one of the most dominant big men in the history of the game, a 7′ 1″, 325-pound giant with feet so quick they belied his size as well as absolutely explosive power. Along with the honors and accolades previously listed, Shaq scored 28,596 points, and collected $292 million in paychecks from six teams.

But even without all of the education, Shaq has proven to be a smart man and savvy manager of his brand and his portfolio. Unlike many athletes who struggle to find their way after retiring, today Shaq actually earns MORE money per year now than he ever did in his playing years. Shaq earns $20-$25 million per year from his post-NBA empire. He has endorsement deals with companies like Icy Hot, Gold Bond, Buick, Zales, and others. He is the joint owner of 155 Five Guys Burgers restaurants, 17 Auntie Annie's Pretzels restaurants, 150 car washes, 40 24-hour fitness centers, a shopping center, a movie theater, and several Las Vegas nightclubs. That's enough to impress someone like Bill Gates. Speaking of which, did you know that Shaq can lift $70 billion with his own two hands?

Shaq learned that lesson his banker tried to teach him well. In Shaq's own words:

"It is not about how much money you make. The question is — are you educated enough to KEEP it."

Despite his legacy, O'Neal is determined not to become an NBA has been, watching his youth play out on highlight reel after highlight reel while he grows old counting his millions. Shaq wants to continue to be the larger than life personality with the thousand watt smile and twinkle in his eye that NBA fans know and love. He wants to be in your living room via his gig as an analyst on TNT's "Inside the NBA", on your Twitter feed, in the ads you fast forward through on your DVR. He wants to continue to be the friendly giant wise cracking as he convinces you to buy Gold Bond lotion or one of his many other products.

And make no mistake; Shaq is in the business of having fun. His role on "Inside the NBA" opposite Charles Barkley, Kenny Smith, and Ernie Johnson Jr. is that of the goofball. In fact, Shaq chose the TNT gig over an offer that would have landed him at ESPN because TNT was willing to let Shaq be Shaq.

Shaq's representation specifically looks for brands that O'Neal can represent with his trademark smirk. Shaq is a big, overgrown, fun, kid and that is how he comes across not just in the endorsement deals he has and at TNT, but in life. Thanks to Shaq's extreme likeability his endorsement income is expanding post retirement, rather than decreasing as is the case for most athletes.

After Shaq retired from the NBA, he did more than just further his education. He also set up a strategic meeting, called the Shaq Summit, where his endorsement partners gathered at his home in Orlando and made 15-minute presentations. He has also held a Shaq Summit in Los Angeles. At each of these meetings, he's gained new gigs and endorsements.

Shaq also targets some of his endorsements at the so-called "regular" folks. People who can't afford to buy the pricier Shaq branded Reebok shoes can get in on his lower priced line, which sells for $20-40. The reasoning, "There are more people that make regular money than there are people who make a whole bunch of money".

Shaq's key to endorsement success is his likeability. He is approachable. He's the guy that you can walk up to and say HI. In fact, about a fifteen years ago, my friend was at a car wash in LA with her brand new Labrador puppy and Shaq came up to her and said "My foot is bigger than your puppy," and asked if he could hold her and then got all gooey and sappy with Holly the puppy. He is that guy.

The key to Shaq is Shaq himself. His quest for knowledge. His desire to be fun and relevant. The fact that if you happen to run into him at a car wash and let him play with your puppy you get the same guy with the same voice that says "Man up with Gold Bond."

And also, part of it is that Shaq doesn't need any of it. In fact, he doesn't even count it. Back in the early days of his NBA career, his money manager trained him to put more than a million dollars a year into annuities. That income alone is now more than enough to live on. His endorsement income is for his six kids. "I have all the toys I want," he says.