Apple Was Founded 39 Years Ago Today By Jobs, Wozniak And A Guy Who Made The Worst Decision In History

By Brian Warner on April 1, 2015 in Articles › Entertainment

39 years ago today, on April 1st, 1976, a little computer company called Apple Inc. was founded in Cupertino, California. Most of us know that the company had two co-founders named Steve. Steve Jobs and Steve Wozniak. But did you know that there was a third co-founder? This little-known third co-founder is actually the guy who provided all the money and early business expertise that enabled Apple to get off the ground back in 1976. And in return for taking a chance on two unproven nerds, this third founder was given a 10% equity stake in Apple. So why has most of the world never heard of this guy? Has he been too busy over he last few decades sipping Mai-Tais and bedding super models on his billion dollar private island in Borneo? Well, not exactly. Unfortunately, not long after co-founding what would eventually become the most valuable company in the world, the third co-founder wound up making the worst decision in business history…

In the early part of 1976, Steve Jobs was toiling away as a lowly technician at Atari while Steve Wozniak worked as an engineer for Hewlitt-Packard. Wozniak and Jobs had been friends since meeting at Homestead High School in Cupertino, California. At some point early that year, Wozniak built the hardware, operating system and circuit boards for a very basic computer that he would eventually call the Apple 1. It was Jobs who actually suggested the name after returning from a fruit farm where he had subsisted on nothing but apples for more than 10 days straight. In his eyes, the name "Apple" was "fun, spirited and not intimidating," perfect for a piece of unfamiliar technology. It was also Jobs who suggested that Wozniak manufacture his Apple 1 as a commercial product that other computer enthusiasts could purchase–Wozniak was planning to just give everything away for free. In order to do that, they would need to raise some money and form a company. 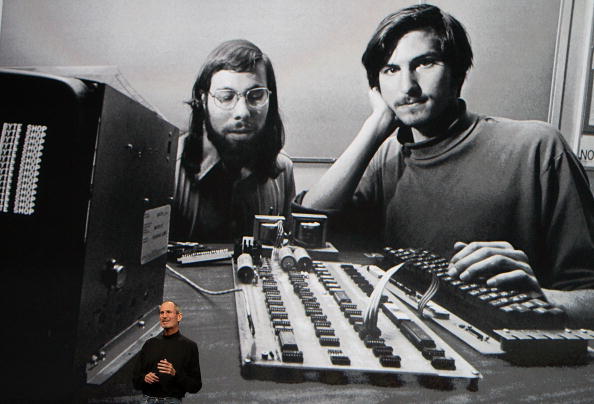 A Company Was Born

On April 1st, 1976 the Apple Computer Company was founded by Steve Jobs, Steve Wozniak and Ronald Wayne. In exchange for 10% of the company, Wayne was expected to draw up the partnership documents, write the very first Apple 1 manual and provide a general level of "adult supervision" for the young upstart. He also ended up designing the very first Apple corporate logo. Four months later, the very first Apple 1 computers went sale for $666.66 (roughly $2,800 in 2013 dollars). The Apple 1 was an instant smash hit that opened the door for the Apple 2 which was an even bigger success. In 1976, Apple's revenues were $175,000. In 1977 revenues grew to $2.7 million. Apple went public in 1980 after doing $117 million in sales. The public offering made over 300 employees at Apple instant millionaires. 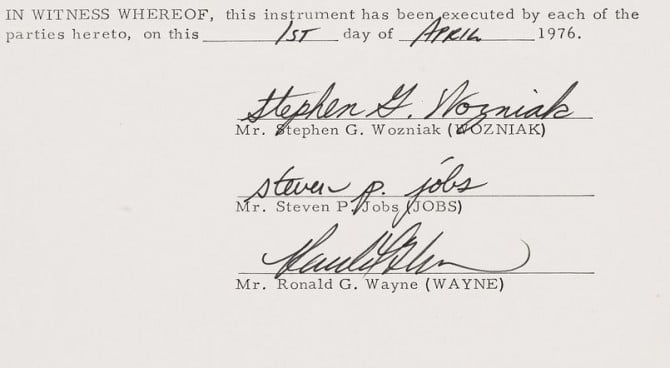 Giving Up A Fortune

Amazingly, in 1982, just five years after launching the company, Apple earned over $1 billion. By then, both Jobs and Woz were each personally worth hundreds of millions of dollars.

But what happened to Ronald Wayne? He must have made millions as well, right? Wrong. Unfortunately, Ronald Wayne did not stick around long enough to see Apple soar to such great heights. In fact, just 12 days after forming the company with Woz and Jobs, Ronald decided to sell his entire stake back for the measly sum of $800. He ended up receiving an additional $1,500 a few months later that fully relinquished all his future claims against Apple. $800 + $1,500 = $2,300 which is the 2015 equivalent of $9,500.

Ronald Wayne essentially sold 10% of what would some day become the largest corporation in the world, for around $10 grand. Why on earth would he do that?

When Jobs, Wayne and Wozniak launched Apple, the type of partnership they formed would hold each founder personally liable for any debts incurred by the company or any of its members. In other words, Wayne could have been on the hook personally for any debts these crazy 20-year-old hippie computer nerds ran up. This may have been a valid concern at the time. Not only did Ronald Wayne already own several other companies and assets that he did not want to risk losing, but he also wasn't exactly confident that two kids with zero business experience, who made a new fangled gadget no one had ever heard of, had a chance in hell at being successful. 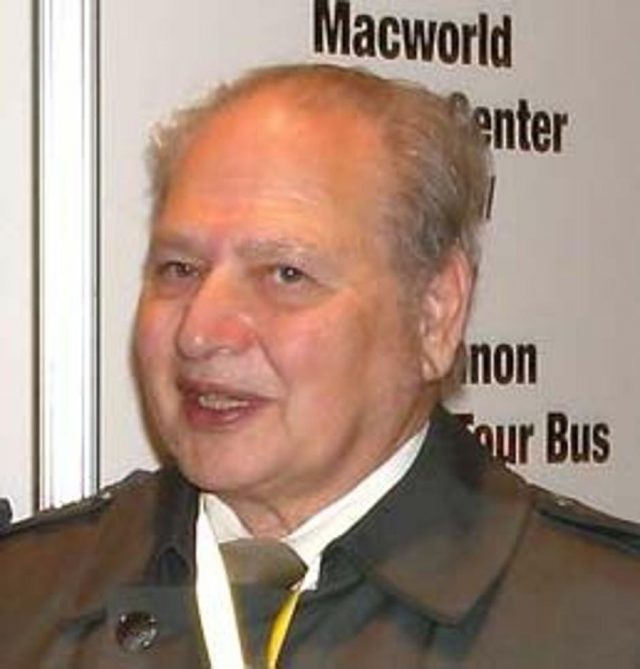 How Much Money Did Ronald Throw Away?

That would make him the third richest person on the planet by a hair. Warren Buffett is just $600 million richer right now. And judging by how well Apple has performed over the last several years, it's not insane to think that the company will keep doing very very well. Some analysts are predicting that Apple will be worth $1 trillion some day soon. At that level, Ronald Wayne's long lost stake would have been worth $100 billion and he would be the richest person in the world.

To be fair, that last scenario is not very realistic. But even if he had managed to hold onto a measly 1% of Apple (10% of his original 10% stake), Ronald would be worth $7.2 billion today!

So what ended up happening to Ronald Wayne?

After getting paid out of Apple, he went back to work for Atari. He left Atari in 1978 to work at the Lawrence Livermore National Laboratory. He spent some time working for a small electronics company. He later owned a stamp shop. Over the years, Steve Jobs made a handful of attempts to bring Ronald back to Apple, but he resisted every time.

More recently, Ronald wrote a book about the constitution. For the last decade he has been retired and living in a mobile home in rural Nevada. He is not a billionaire. He is not a millionaire. He did not own a single Apple product his entire life until 2011, when a fan gave him a free iPad2 at a tech conference.

How would you feel knowing that you gave up a multi-billion dollar lottery ticket? Could you live with yourself? Can you sort of understand Ronald's reasoning back in 1976, for wanting to extricate himself from Apple? Either way, I bet April 1st is a particularly tough day every year for Ronald Wayne.