By Simon Gerard on January 14, 2012 in Articles › Entertainment

Apple Inc. has just released it's annual statement that reveals the earnings and compensation of top management for stockholders and auditors. The late Steve Jobs took home the same amount in 2011 as he has every year since he returned as Apple CEO in 1998: $1. On the other side of the spectrum, the new Apple CEO, Tim Cook, made $378 million in 2011. He also took home $59 million in 2010. One of the last CEO compensation packages that size coincidentally was given to Steve Jobs in 2000, when he made $600 million. Note that Cook hasn't seen $378 million added to his bank account yet. He got paid close to $1 million in salary, and the $376 million is the estimated value of the 1 million restricted Apple shares that he was granted. Cook is able exercise 50% of the grant in 2016 and the rest in 2021. So it looks like Apple's board of directors are betting big and on the long term with Tim Cook.

Check out Tim Cook's and Steve Jobs' compensation by clicking the image below:

Tim Cook has only recently come into the spotlight, leaving everyone not familiar with him wondering why Apple is stacking it up to the sky for him. He is known for being a workoholic like his predecessor Steve Jobs. He famously wakes up every morning at 4:30am to answer emails and hit the gym for an hour. While Steve Jobs was known for his passion, ego and ferocity in his leadership style, Tim Cook is known for being calm and calculated, while still confident as a leader. Even though Steve Jobs was certainly the face of Apple, Tim Cook made huge contributions to Apple since Steve Jobs hired him in 1998 and is credited with much of what has made Apple the most valuble corporation in the world with a market cap at nearly $400 billion. 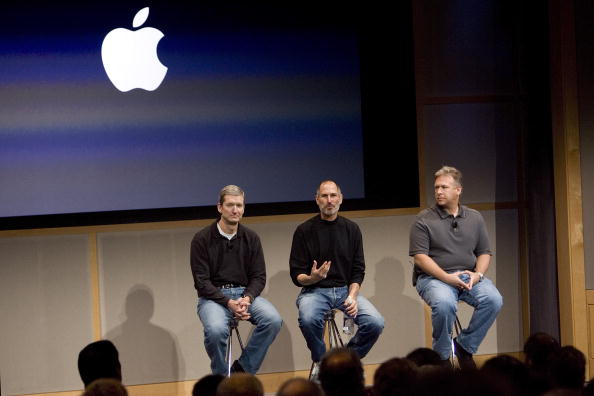 Cook's most famous contribution to Apple was his revolutionary changes to the production and supply chain of their products. He got Apple out of the manufacturing and stocking of many of their products' parts and negotiated with new companies to supply or produce what they needed. He virtually eliminated the need to stockpile inventory, reducing costs to Apple massively (and caused huge line-ups outside Apple stores).  He also took the initiative to lock up resources and manufacturers needed to make Apple products, reducing the opportunity for competitors to imitate them.  He also forwarded the change from PowerPC chips to Intel chips in Apple computers. This made it possible to run Windows on a Mac, which brought millions of Windows users to switch to Mac. With Steve Jobs' health problems forcing him to take several extended breaks as Apple's CEO, Tim Cook filled in for him, spending about a year serving as CEO total before Steve Jobs stepped down in August 2011.

Do you think Tim Cook, his contributions to Apple and his replacement of Steve Jobs, is worth $378 million in compensation for 2011 alone? Do you think he has what it takes to keep Apple on top without Steve Jobs?