American Pharoah Could Be Worth $50 Million. So Why Does His Owner Want To Keep Racing Him??!!

By Marvin Jules on June 10, 2015 in Articles › Entertainment

History was made last Saturday, when 3-year-old American Pharoah won the Belmont Stakes to complete the Triple Crown, the most prestigious award in horse racing, and an award that had gone unclaimed for 37 years. American Pharoah is now royalty in thoroughbred racing circles, and has already earned a total of $4,530,300 by winning seven of his eight career starts. It has been reported that Zayat Stables recently sold American Pharoah's breeding rights to Coolmore Ashford Stud for an undisclosed amount, though American Pharoah's owner, Ahmed Zayat, has already said that he intends to race the colt for the remainder of the year. Should he?

According to various reports, American Pharoah's stud fee is projected to be as much as $100,000. That's $100k a pop. Coolmore Ashford Stud has farms in both North America and Australia, which means that they could stand the horse for breeding seasons in both places. American Pharoah would likely "book" somewhere around 100 mares a year, but it is entirely possible that he could book up to 120 mares a year. When extrapolating the numbers over a four year period, American Pharoah could have a value of up to roughly $50 million. 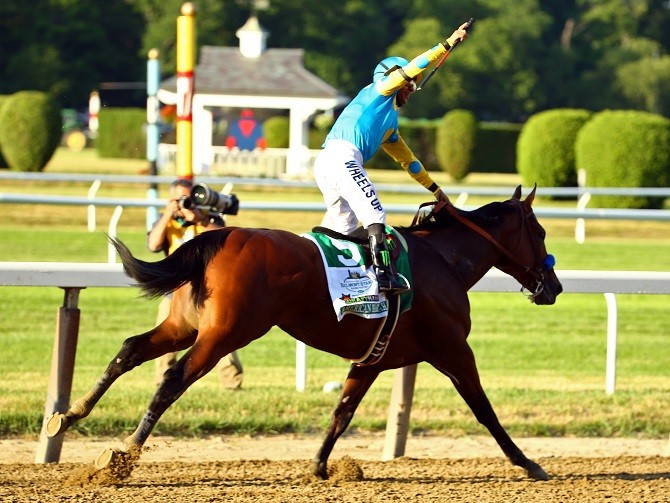 Though Zayat sold the breeding right's of American Pharoah, he still retains the racing rights, meaning that he will dictate when the horse retires from racing. Zayat said earlier this week that in all likelihood, he plans on racing American Pharoah in The Haskell at Monmouth Park in Oceanport, New Jersey, which is a Grade I race that spans a little over a mile, and has a purse of $1 million. After the Haskell, Zayat's likely targets for American Pharoah will include the Travers Stakes at Saratoga, the Awesome Again at Santa Anita or the Jockey Club Gold Cup at Belmont Park, before taking the horse to Keeneland for the Breeders' Cup.

Even if American Pharoah were to sweep the next three races he runs in, the total winnings would be just $4 million, a drop in the bucket when compared to the money the horse could make in stud fees, though those stud fee earnings would not go to Zayat. Even if the horse were to lose in future races, his stud fee would not likely be affected. The biggest issue with racing a horse as valuable as American Pharoah is insurance. Said Ron Mitchell of Blood-Horse: "I can't say definitely (when he will be retired), but horses become extremely valuable and expensive to keep with insurance and other costs and from a farm economics (viewpoint) it becomes economically silly not to retire him … Even Secretariat retired after his 3-year-old season."

Nevertheless, what will happen with American Pharoah remains to be seen, but horse racing fans everywhere can rejoice in the fact that we finally have something that they have waited to see for 37 years – a Triple Crown winning horse.