By Amy Lamare on October 31, 2013 in Articles › Entertainment

It could be argued that Jeff Bezos is the one and only King of the Internet. Forget the Google guys, forget Mark Zuckerberg. Jeff Bezos and Amazon.com have done more to change our daily electronic lives than anyone or any company. Bezos has revolutionized the way we shop, consume books, music, media, and much much more. In under a decade Amazon.com grew to become the largest retailer in the world and thanks to that amazing success, today Jeff Bezos is a billionaire 33 times over. But Jeff Bezos doesn't come from money and privilege. In fact, his mother was just a teenager when she gave birth to the future internet tycoon and his birth father abandoned the family when Jeff was just three years old. To help support the family, Jeff actually spent summers and weekends vaccinating and castrating cattle at his maternal grandparent's Texas ranch. So how exactly does one go from castrating cows on a Texas ranch to leading one of the most innovating companies in the world with $33 billion in the bank? You're about to find out… 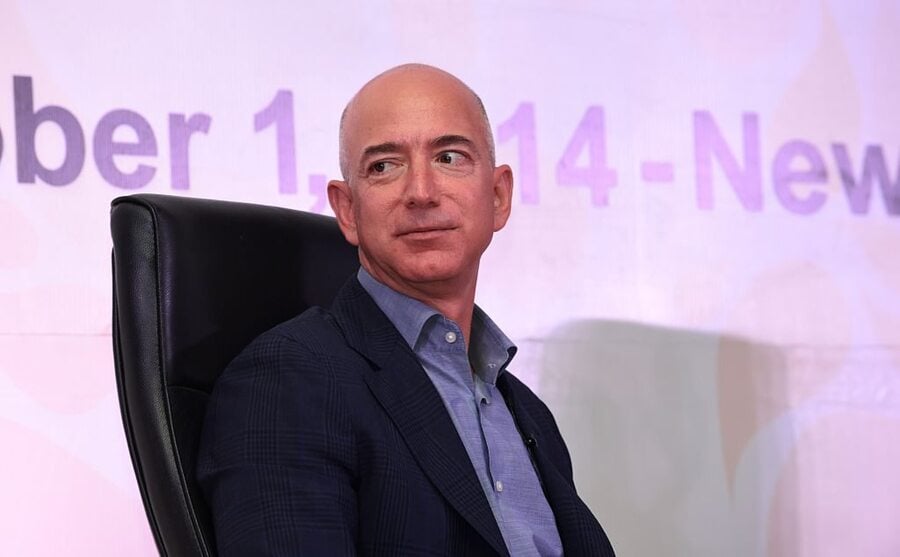 Jeff Bezos exhibited a very creative mind even as a child. He liked to tinker with things and figure out how they worked. When he was a toddler he dismantled his crib with a screwdriver. As a kid, Jeff turned his parents garage into his own private laboratory, rigging electrical contraptions that were far more advanced than his age. When Bezos was a teenager his family moved to Miami where he soon discovered and fell in love with computers. He started his first business in high school, the Dream Institute, a summer camp for fourth, fifth and sixth graders that focused on education. He was valedictorian of his high school class and he headed off to Princeton, graduating four years later summa cum laude in 1986.

After graduation, Bezos worked on Wall Street, which is where he met his wife Mackenzie, who had also attended Princeton. He became the youngest vice president at D.E. Shaw in 1990 and was building a lucrative career in finance. But increasingly, Bezos felt distracted by the overwhelming explosion of growth that was being seen with this new fangled world wide web "Internet" phenomenon.

In the early 90s, Bezos observed that Internet usage was increasing by roughly 2300% per year and he saw a massive opportunity in those stats. In a methodical and thorough fashion, he examined the top 20 mail order businesses, asking himself how those business could be run more efficiently on the Internet. Books became the logical answer. A catalog that covered books did not exist as it would be way too big to mail. But online books could exist as a huge and evolving database serving a limitless number of people.

Bezos flew to Los Angeles the next day for the American Booksellers' Convention in order to learn everything he could about the book business. What he found out was very intriguing: Most major book wholesalers already had electronic lists of their titles. All Bezos would need to do is set up a site on the Internet where people could search their stock and place orders with a click of the mouse.

Upon his return from the Booksellers' Convention, Bezos immediately quit his Wall Street job. Next, he and wife Mackenzie moved to Seattle. Why Seattle? In Seattle, Bezos would have access to the book wholesaler Ingram and to the growing pool of computer talent he would surely need in the coming years. The couple set out for Seattle by car, Jeff actually wrote Amazon's business plan while Mackenzie drove and navigated the 3000 mile journey.

Amazon's first offices were in Jeff and Mackenzie's garage. He hired a handful of employees and began developing the software that would run the business. Operations expanded into a two-bedroom house with three Sun Microstations. They set up a test site and invited 300 friends to beta test it.

The name "Amazon.com" has an interesting back story. First off, Bezos wanted the name to start with the letter "A" so it would appear prominently in web directories like Yahoo.com which at the time displayed their results alphabetically. Secondly, Bezos incorrectly believed that The Amazon river was the largest river in the world which would be a perfect metaphor for his his aspiration to build the biggest company in the world. Technically, at 3976 miles, The Amazon is the second largest river in the world behind The Nile which is 4132 miles long. But we're really splitting hairs here, the overall concept still works. The final reason Bezos liked the name "Amazon" is because it features the letters "A" and "Z". That conveniently leds itself to another slogan/aspiration: That Amazon would eventually carry every product in the world, from "A to Z". Can you see the subtle "A to Z" reference in the Amazon logo? 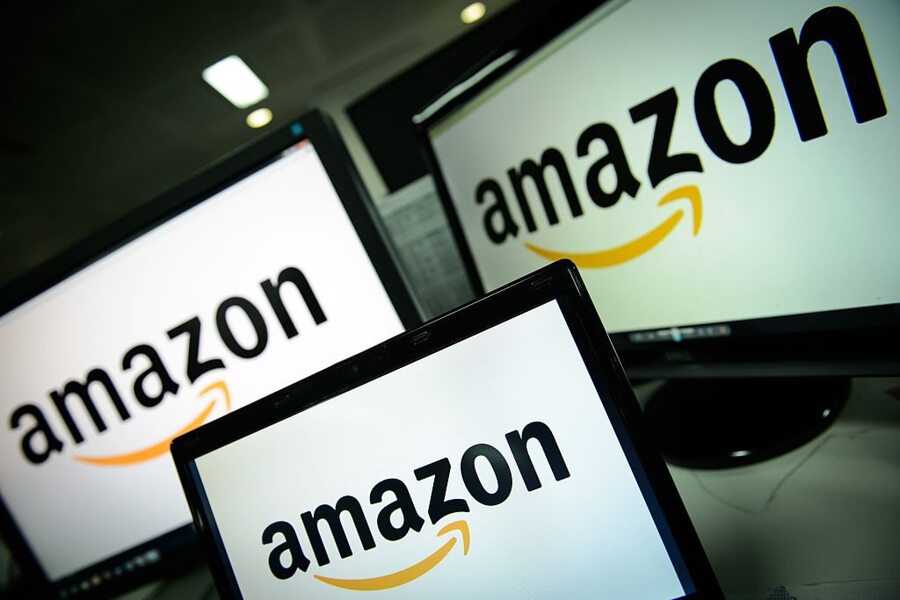 Amazon.com officially went live on July 16, 1995 and we all know what happened next. It seems like Amazon was a household name from day one, and it almost was. With no press or promotions, Amazon went viral before going viral was a thing. Within the first 30 days of being live, Amazon sold books in all 50 states and 45 foreign countries. Within two months, sales reached $20,000 a week. Amazon took off faster than Bezos could have ever imagined.

Amazon.com went public in 1997, but analysts continued to be wary. Could Amazon hold onto its market share when brick and mortar booksellers launched their own sites? There were a great many doubters. As we all know today traditional bookstores like Barnes and Noble would make horrendous missteps with regards to the internet and most would be completely out of business within a few years. In 1995 yearly sales for the company were $510,000. In 2013, Amazon did more than $67 billion in sales.

Right from the beginning Bezos wanted to be the "Earth's biggest bookstore." Soon, that changed to the "Earth's biggest anything store," as Bezos expanded into other retail arenas, often at the expense of profit. As Amazon continued to expand, Jeff Bezos continually emphasized his Six Core Values: Customer obsession, ownership, bias for action, frugality, high hiring bar and innovation. "Our vision", he said, "is to become the world's most customer-centric company. The place where people come to find and discover anything they might want to buy online."

As Amazon expanded rapidly, traditional analysts on Wall Street warned investors that Amazon could not sustain this level of expansion and success and that they soon would fail. As Amazon.com celebrated their fifth anniversary in July 2000, shares of the dot-com giant fell to a then all time low, costing Bezos $1 billion personally. Did he let the constant cries of "Amazon.bomb" get him down or slow his company's growth down? No he did not.

Amazon's success has allowed Bezos to indulge his lifelong interest in space travel and in 2004 he founded the aerospace company Blue Origin. From its 26-acre research campus outside Seattle and private rocket launching facility in West Texas, Blue Origin is developing technologies to enable access to space for everyday people with the goal of dramatically lower costs and increased reliability In its mission statement, Blue Origin identifies its ultimate goal as the establishment of an enduring human presence in outer space.

In 2007, Amazon again changed the way we read books with the e-book reader Kindle. This digital book reader allowed users to buy, download, read and save their books instantly for the first time. In 2011, Amazon entered the tablet marketplace with the Kindle Fire, followed closely by the Kindle Fire HD- designed to compete directly with Apple's iPad.

Let's not brush past the Kindle's significance too quickly. Think about this: Between the time Johannes Gutenberg invented the printing press in 1440 t the release of the first Kindle in 2007, books and the book industry barely changed at all. As every other significant product from the last 600 years was revolutionized time and again, the book and book industry remained essentially unchanged. Then, in one fell swoop, Amazon, Bezos and the Kindle turned everything upside down forever. Thanks largely to the Kindle and its many imitators, Kids who are just learning to read now, may never need to use a physical book at any point in their lives. How crazy is that? Within three years of releasing the Kindle, Amazon's sales of e-books surpassed the sales of physical books.

Bezos made more headlines worldwide on August 5, 2013, when he purchased The Washington Post for $250 million cash. The deal marks the end of the four-generation ownership of the paper by the Graham family. Bezos' impact on the venerable newspaper and its other properties is as yet unknown, but given who he is and how he has conducted his life, it's sure to be innovative, exciting, and deliver news in ways we haven't even thought of yet.

Jeff Bezos set out to make buying books easier and along the way transformed the way we shop, read, listen to music, and so on. Amazon.com has become the go-to place for nearly anything you want to buy. His methodical approach and belief in his vision have made him wildly successful and wealthy. Today, the majority of Bezos' $33 billion net worth comes from his 19% stake in Amazon. He was also an early investor in Google and AirBnB. Can you imagine a world without Amazon.com? It's unthinkable just 18 years after its launch. One can only imagine how Amazon will change our lives over the next 18 years!