AKB48 is the Girl Group to End All Girl's Groups

By Paula Wilson on August 26, 2014 in Articles › Entertainment

Manufactured pop groups have been around since executives realized that money could be made from recording music. While the success of some groups is dependent upon the individual members, other groups become a brand, and it doesn't matter who is actually doing the performing, as long as the group itself exists. In the United States and Europe, audiences seem to like the group line up to remain static.  The Backstreet Boys, Take That, the Spice Girls, N'Sync, and En Vogue, fell apart when members chose to leave. In Asia, however, the world of the manufactured pop group, is taken to an entirely new level. Nowhere is this more apparent than in the case of AKB48.  Originally a 48-member all-girl pop group with a rotating line-up, it has become one of Japan's most popular pop groups ever.  Record sales in 2012 topped $226 million.  What's the secret of the group's success?  The answer has something to do with money, money, and more money…

AKB48 is the brainchild of Japanese music producer, Yasushi Akimoto.  His goal was to create a group that, rather than touring constantly, occupied its own performance space.  Audience members could come see the group perform live regularly, and could actually interact with the singers.  He dubbed it the "idols you can meet" concept.  He held auditions during the summer of 2005.  7,924 female singers, ranging in age from their mid-teens to early 20s, auditioned for the group. He chose 24, and by the time the group performed their first show in the AKB48 Theater, that number had dropped to 20.  One more member was added the following January.  A waitress in the AKB48 cafe, Mariko Shinoda, had become so popular with AKB48 audience members that she was promoted to the original group of performers, now known as Team A. 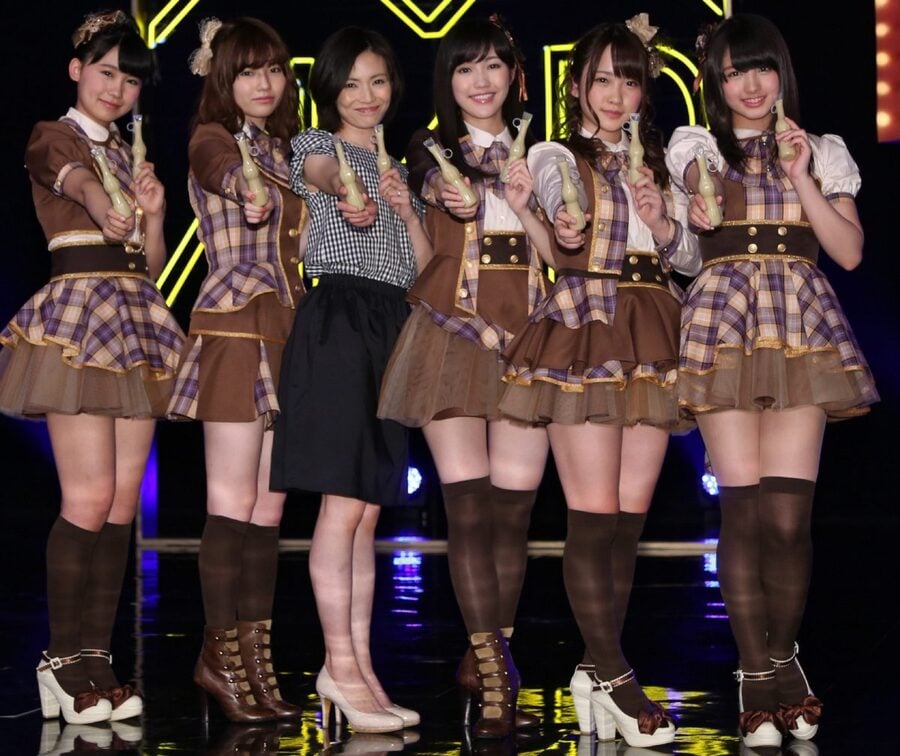 A second series of auditions was held in February 2006.  This time, the auditions were held in partnership with the major Japanese mobile phone company, NTT DoCoMo.  Auditions were sent in via mobile phone.  This time there were 11,892 auditionees.  19 were chosen to form what eventually became the 18-member Team K.  Finally, a third set of auditions was held in December 2006.  Out of the 12,828 applications, 13 were chosen to form Team B.

The internal team formation is part of Akimoto's business model for increasing ticket sales and popularity.  Each team has its own personality and sound, and rotates between performing in AKB48's dedicated theater in the Don Quijote Store in Akihabara, Tokyo, and touring, and making guest appearances.  The teams also regularly participate in "handshake events", where they greet their fans publicly.  Team A is all about freedom.  Team B wears cute costumes and plays up the whole "idol" idea.  Team K is about power and strength.  Each team has its own group of fans, but when albums are released, the best singers are pulled from each team to record the tracks.  AKB48 released its first two tracks independently in 2006, before the formation of Team B, and their debut was a hit.  They also made their first television appearance, and subsequently signed with DefStar Records, a subsidiary of Sony Music.

They made their major label debut with the song, "Aitakatta", in the fall of 2006.  Recorded by singers from Team's A and K, the single charted for a solid 65 weeks.  Their next few releases weren't as popular, and Akimoto began shuffling members of the team's around, as he attempted to create three strong groups.  By December 2006, the three teams totaled 48 members, and AKB48, was finally true to its name.  On December 31st, 43 members performed on the television show, "Kohaku Uta Gassen", setting a record for the most number of performers onstage at once in the history of the program.

Since then, AKB48 has become an entertainment machine.  They have released four popular studio albums, and have appeared on variety shows, in documentaries and feature films, and a dizzying number of music videos, ranging in length from a few minutes to feature length opuses.  They've been named the Artist of the Year by Billboard Japan three times, in 2011, 2012, and 2013, and Pop Artists of the Year four times, from 2010 through 2013.  Current record sales stand at 30 million, and they've sold 28.78 million singles.  They have sold the most singles by any Japanese girl group ever.  Their last 23 singles have reached #1 on the Oricon Weekly Singles charts, and eighteen of them have sold over a million copies.  At the end of the year in 2011 and 2012, AKB48 singles held the top 5 spots on the Oricon Yearly Singles charts.  In 2013, they held the top 4 spots.  There are now multiple AKB48 "sister" groups in Japan, China, and Indonesia.  Yasushi Akimoto's idea has grown into one of the most lucrative musical franchises ever.  AKB48 now has 140 members, made up of a combination of main members and trainees.  Auditions for new performers are held twice a year, and as members age out, choose to leave, or are occasionally fired, the trainee members move in to to their places.  With this system in place, AKB48 will probably continue for decades, in much the same way that Menudo, the smaller South American answer to this model, lasted from the late 70s to 2009.  In addition to Teams A, B, and K, there are now Teams 4 and 8, performing in Tokyo and the surrounding area. Some of the members of the main teams rotate between the sister groups in other countries and the main teams, with each team performing its own show.

However, this system is not without controversy.  In order to maintain a certain image, AKB48 members are not allowed to date and must be well-behaved at all times.  Members who have violated these policies have been fired, demoted to trainee status, and in one case, one member had her head shaved and had to make a public apology, after being caught in a hotel room with a man.  At the same time, the group is often criticized for its sexual lyrics (all songs are written by Akimoto), and by their racy videos, which often feature them wearing skimpy lingerie, bathing, or doing things of that ilk.  They have come under fire from parent's groups who say that they are setting a bad example for their younger fans, but the negative comments haven't seemed to affect ticket or record sales at all.  Yasushi Akimoto has become very wealthy due to the success of his girl-group experiment, and as the brand has expanded into other countries, his power as a producer and entertainment impresario has only increased.  He was recently chosen to produce the Opening Ceremony of the 2020 Tokyo Olympics.  However, a petition has been filed against his appointment, and has already gained 11,000 signatures.  The petition demands his withdrawal as he represents "the decline of the Japanese entertainment industry".  Apparently, not everyone in Japan is a fan of AKB48.