After Getting Dumped By Tinder, Whitney Wolfe Herd Is Taking Revenge With $8 Billion Bumble IPO

By Amy Lamare on September 15, 2020 in Articles › Entertainment

Not long after college, Whitney Wolfe Herd went to work for dating app Tinder. The story of her crash and burn there and her ousting amid allegations she was discriminated against because she was a woman, has been told countless times. Since she left Tinder, she founded her own dating app, Bumble, in 2014. Now, the app in which women make the first move is prepping for its IPO as soon as early 2021 and reports say the company is seeking a valuation between $6 billion and $8 billion. Wolfe Herd, at 31, is the CEO of Bumble and its parent company and in that role, leading the IPO. As of this writing, the company is still seeking an underwriter, but with 100 million users and growing, Wolfe Herd should have her pick of the proverbial litter.

Whitney Wolfe Herd grew up in Salt Lake City, Utah, where she attended Judge Memorial Catholic High School. Her father Michael is a property developer and Jewish. Her mother Kelly is a homemaker and Catholic. She became a feminist at an early age when she noticed and disliked how the dating culture in Utah relied on men to make the first move. 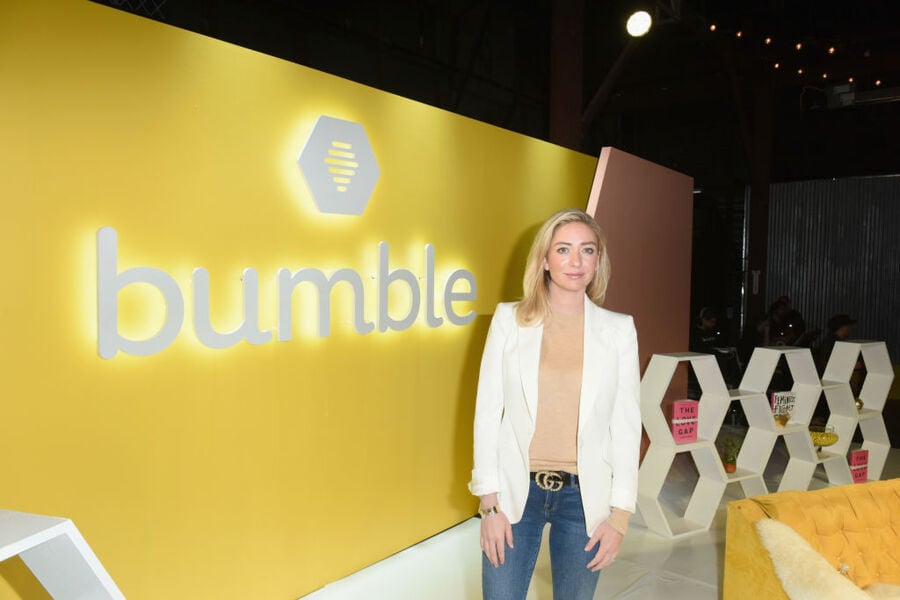 She studied International Studies at Southern Methodist University, where she was a member of Kappa Kappa Gamma. She did her junior year abroad at the Sorbonne in Paris. Wolfe Herd's entrepreneurial spirit started early. When she was 20 and still in college, she started a business selling bamboo tote bags to help the areas that had been affected by the BP oil spill. The non-profit was called the "Help Us Project," and were designed by celebrity stylist Patrick Aufdenkamp. Celebrities including Nicole Richie and Rachel Zoe were spotted carrying the bags. Next, she and Aufdenkamp started a clothing line called "Tender Heart," which raised awareness on human trafficking fair trade. After graduating from SMU, she spent some time in Southeast Asia and worked in orphanages.

When she was 22, she moved to Los Angeles and took a job at the startup incubator Hatch Labs. While there she and a group of young men starting working on an idea for a dating app. That idea became Tinder, which Wolfe Herd came up with the name for and headed up the marketing for. The app became a global phenomenon thanks to Whitney's help. She was ultimately credited with being a co-founder and for two years was the vice president of marketing. While at Tinder she and co-founder Justin Mateen dated. She left Tinder not long after they broke up and filed a lawsuit alleging sexual harassment and discrimination. The case was settled out of court and the details are private.

She set out to reinvent herself after the bad experience at Tinder and planned to build a female-focused social network, not a dating app. However, her now-former business partner, Russian billionaire Andrey Andreev convinced her to go down another path instead. Whitney was inspired to create the female makes the first move dating app by Sadie Hawkins dances in school where the girls asked the boys to be their date. Bumble's concept is pretty simple: when two people match, women have 24 hours to send the first message. If they don't, the match disappears. If they send a message, the man has 24 hours to reply, or the match disappears. Once both parties have sent a message, that timer gets turned off.  Today, Bumble has about 100 million users in 150 countries. It is second only to Tinder in popularity.

In 2019, Andreev was accused of racism and sexism. He exited Bumble and sold his share. At this point, Wolfe Herd was finally elevated to CEO of her own company.

Wolfe Herd is also trying to outlaw digital sexual harassment – the sending of unsolicited nude photos. She got a law banning this on the books in Texas and now is trying to do the same in California.

On a personal front, Whitney and Texas oil heir Michael Herd married in a three-day ceremony on the Amalfi Coast of Italy in 2017. They met skiing in Aspen in 2013, however, she first saw his profile on a dating app. Herd is the president of the oil and gas company Herd Producing Company, which was founded by his grandfather. He also owns a high-end restaurant called Grove Kitchen + Gardens. The couple has a young son named Bobby, as well as a Great Dane and a yellow lab. The family splits their time between two homes in Texas, one in Austin near Bumble's headquarters and another one in Tyler, Texas near Michael's office. They also have a vacation home in Austin and own the 6.5 acre Herd family estate on Lake Austin.

Whitney Wolfe Herd has a net worth of $230 million and Bumble's potential upcoming IPO could make her much, much wealthier.