By Amy Lamare on September 4, 2020 in Articles › Entertainment

Armie Hammer is a successful actor. He's also descended from Armand Hammer, the head of Occidental Petroleum, which he ran from 1957 until his death in 1990. He was worth $800 million at the time of his death, which is equivalent to $1.6 billion today. He's also the namesake of the super cool Hammer Museum in the Westwood neighborhood of Los Angeles. He was as known for his extensive art collection as he was for his close ties to Soviet Russia. He was a pretty interesting guy, so let's take a look at his life.

Armand Hammer was born May 21, 1898 in New York City. His parents were Jews who had immigrated from Russia. He grew up in the Bronx, where his father Julius ran a medical practice and five drugstores. Hammer was named after the "arm and hammer" symbol of the Socialist Labor Party of America, in which his father was a leader. After the Russian Revolution, part of the SLP became a founding part of the Communist Party of the USA. 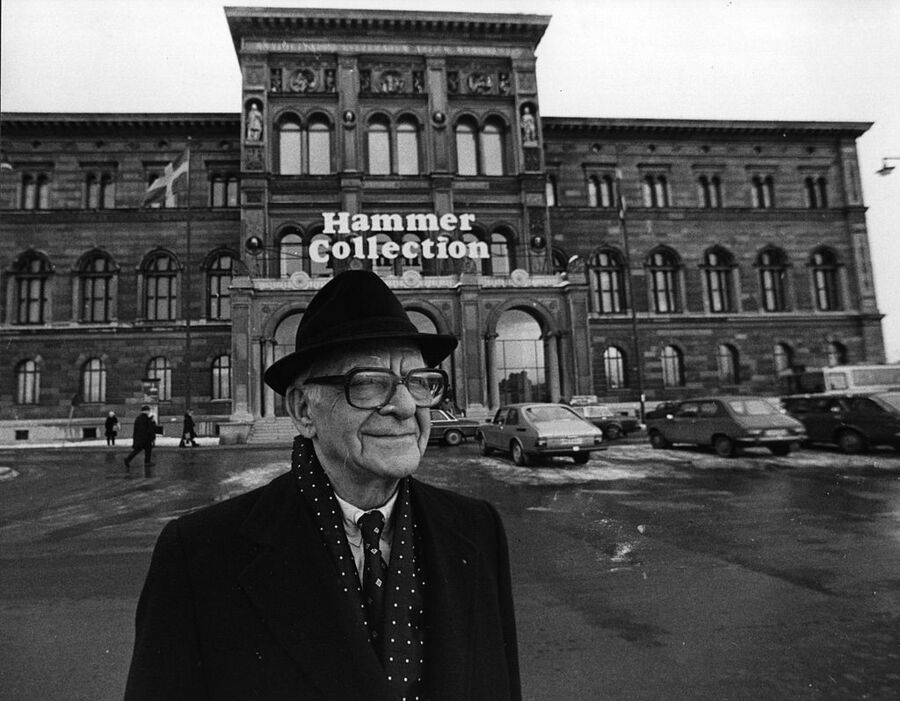 Hammer's father Julius was under federal surveillance due to his socialist and communist activities. Marie Oganesoff was seen entering Julius's medical office by federal agents on July 5, 1919. She was the wife of a former tsarist diplomat. Marie had a history of miscarriages and abortions. On that fateful day, she was looking to terminate her pregnancy. The procedure took place during the flu epidemic and six days later, Marie died. Julius was indicted by a grand jury on the charge of first-degree manslaughter. He was sentenced to three and a half years in Sing Sing prison in 1920. Some historians believe it was Armand, then a medical student, rather than his father, who performed the botched abortion.

After Julius went to prison, Hammer and his brothers took the family drug store business, Allied Drug, and made it wildly successful. Hammer's first true business success was when he manufactured a ginger extract that contained high levels of alcohol legally. As you can imagine, in the days of prohibition, this was very popular. The company did $1 million in sales that year. While he was in prison, Julius sent Armand Hammer to Russia to look after his company Allied Drug and Chemical. For the next decade, Hammer traveled between the U.S. and Soviet Union.

Then, in 1921, Hammer was waiting for the start of his medical internship at Bellevue Hospital. He made a trip to the Soviet Union and didn't come back to the U.S. until late 1930. He never became a full-fledged medical doctor. When Hammer applied for his passport to go on the trip, he indicated he was only visiting western Europe. The Justice Department, and specifically J. Edgar Hoover, knew he was lying but allowed him to travel anyway. The U.S. government watched him not just on this trip, but for the rest of his life. While Hammer was in the Soviet Union he was importing goods and exporting pharmaceuticals to the Soviet Union with his brother Victor. Records reveal that he took $60,000 in medical supplies to help out in a typhus epidemic. He then made a deal with the Soviet government for furs and caviar in exchange for American wheat. He also got into exporting pens and pencils.

Biographers of Hammer would go on to call him a virtual spy for the Soviet Union.

When Hammer returned to the U.S. in the 1930s, he got into a wide array of businesses, art, and cultural endeavors. This included investing in a number of oil production businesses in the U.S. Hammer then parlayed his oil investments into control of Occidental Petroleum. He remained at the helm of Occidental until his death in 1990. In fact, he's buried in the shade of the Occidental tower in Los Angeles.

Throughout his life, he kept up relations and business dealings with the Soviet Union. He even traveled to work for peace between the U.S. and Communist countries of the world. When all was said and done, Hammer was the go-between for seven U.S. Presidents and five Soviet General Secretaries.

Personally, Hammer was the middle of three sons and very close to his brothers Harry and Victor throughout their lives. He was married three times: the first in 1927 to Olga Von Root, a Russian actress and daughter of a czarist general, the second in 1943 to Angela Zevely. In 1956, he married Frances Barrett. They were married until her death in 1989. He had one son with his first wife, Julian Armand Hammer. Businessman Michael Armand Hammer is his grandson and actor Armie Hammer is his great-grandson.

Armand Hammer died in December 1990 of bone marrow cancer. He was 92. He is buried in the Westwood Village Memorial Park Cemetery, which is across the street from the Occidental building.