By Brian Warner on January 27, 2021 in Articles › Entertainment

(Stephon voice): This week's hottest stock is GameStop. This stock has everything… Reddit memes, hedge funds getting kicked in the nuts, confused CNBC anchors, the New York Mets, Elon Musk… Even if you don't pay attention to the business world, you may have heard that something insane is happening with GameStop stock right now. GameStop, the deteriorating video game retailer typically found at equally deteriorating malls, has had a week on Wall Street that only be described as a fever dream (and the week is only half over!). The stock has soared in a way that makes absolutely no financial sense at all whatsoever for a company that lost $275 million in the last 12 months and generally is considered to be a modern-day Radio Shack. And no one is happier than the company's CEO George Sherman, a guy who has been on the job for less than two years.

[Disclaimer – I do not own any shares of GameStop and this article is in no way a recommendation to buy or sell shares in any stock.]

So what the heck is going on? 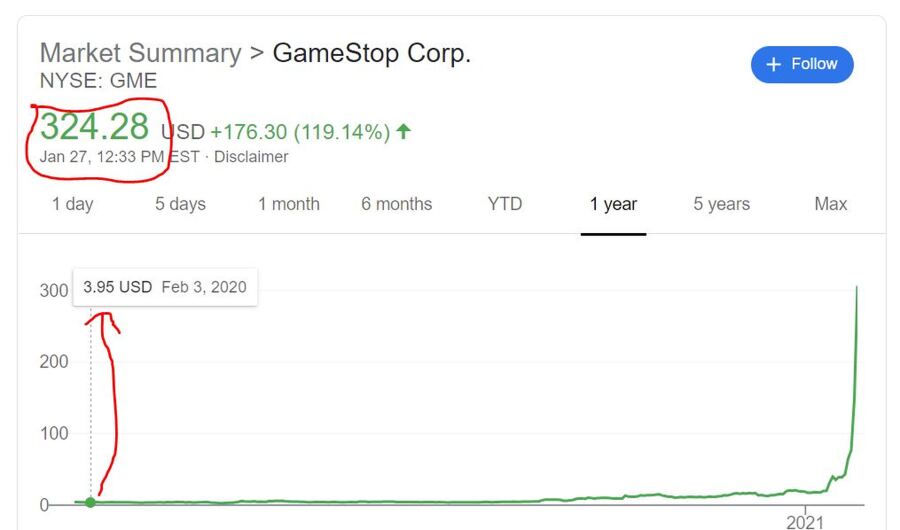 Please note how one year ago a single share of GME would cost a little under $4.

And now please note what happens to the green line after we get into 2021. And note how as I type this article, a single share of GME would cost you $324.28.

George Sherman is the CEO of GameStop. He has been CEO since April, 2019. Not quite two years.

At the time he became CEO, GME was trading at around $10 a share. Two years prior the stock had been at $25.

Upon becoming CEO, George Sherman was given 2.3 million shares in the company. On the day he became CEO those shares were worth $23 million.

One year later those shares were worth around $7 million after the share price plunged to an all-time low of around $3.

Not exactly A+ performance for a CEO.

As I type this article (I say that because the share price has been swinging wildly by the hour… as you can see in that above screenshot the stock is up $176 a share in the first few hours of today alone), George Sherman's 2.3 million shares are worth:

George Sherman isn't the only insider who finds themselves suddenly sitting on a massive fortune. Robert Lloyd is the company's former CFO. He was CFO from 2010 until May 2019. According to SEC filings, Lloyd owns 534,000 shares. A year ago those shares were worth $1.6 million. Today those shares are worth:

Robert Lloyd's successor, James Bell owns 511,000 shares. Formerly worth $1.5 million. Currently worth $165 million. Chief Merchandising Officer Chris Homeister has seen roughly the same with his 507,000 shares. Chief Customer Officer Frank Hamlin has seen his 390,000 shares go from being worth $1 million to $123 million. There are a dozen similar examples.

A guy on the r/wallstreetbets forum, username "Roaring Kitty", shared a screenshot of his personal holdings. He infamously paid around $56,000 to build a stake of 50,000 shares through a mix or normal purchases and options. Today those 50,000 shares are worth $16 million.

The long story short (no pun intended) is that a "short squeeze" of epic proportions is being coordinated by a bunch of vigilante traders who follow a subreddit called r/wallstreetbets. It's become a bit of a meme, or a running joke that people are jumping in on "for the lols", in digital parlance.

Even Elon Musk – the worlds' richest human being – got in on the action with a tweet that simply said "Gamestonk!!" with a link to r/wallstreet bets:

FYI, "stonk" is basically meme lingo for "stock". Used in a sentence: "Barstool founder Dave Portnoy declares 'stonks only go up' while tasting a slice of pizza."

To keep this as simple as possible, until recently GameStop was literally the most shorted stock on Wall Street. When a stock is shorted, the shorter is betting the price will drop. People with short positions only make money when the stock decreases in price. The risk with short selling is there's unlimited downside.

For some reason, the people who follow r/wallstreetbets decided to coordinate an attack on all the GME shorts by buying up tons of shares, sending the price to the moon, forcing the shorts to "cover" their bets… This actually creates a vicious cycle for the shorts. When the stock suddenly spikes, they are forced to rush in and buy shares back to avoid a potentially unlimited downside. This rush results in even more gasoline being poured onto the fire as the shorts buy more shares at even higher prices. Hence the term "short squeeze".

As a result of this unprecedented short squeeze, it has been reported that some hedge funds who had large short positions are teetering on bankruptcy, having lost hundreds of millions or even billions of dollar in a matter of hours this week.

One hedge fund, which I won't name because these are unconfirmed rumors, was allegedly so damaged that it had to borrow $2 billion from a fellow hedge fund run by the owner of the NY Mets. It has been alleged that the hedge fund proceeded to lose that entire $2 billion bailout the very next day (yesterday).

It will be extremely interesting to see where this all ends up.

I'm dying to know if GameStop CEO (or any other insiders who are suddenly sitting on massive fortunes) are even allowed to sell their shares right now. If I'm George Sherman, I'd quit RIGHT NOW, releasing myself of all conflicts of interest and fiduciary duties, and therefore freeing me to dump 100% of my shares on the open market ASAP.