A Korean Family Has Made $125 Million Off "Baby Shark"

By Amy Lamare on January 4, 2020 in Articles › Entertainment

If you have kids in your life – whether they're your own, your nieces and nephews, or your friends' kids – one thing has been absolutely inescapable this year and that is the song "Baby Shark." The song so infiltrated pop culture that it was even featured in this year's World Series, when fans of the Washington Nationals clapped in unison and sang the infectious line: Baby Shark, doo-doo-doo-doo-doo-doo." And it's not just North America that has fallen for the song. In Lebanon is became a rallying cry after a video of protesters singing to a frightened young child went viral. "Baby Shark" is one of the most-watched YouTube videos of all time with more than four billion views since it first surfaced three years ago.

The Korean family behind "Baby Shark" has made $125 million from the catchy tune. Kim Min-seok co-founded SmartStudy Co, in 2010. The educational offshoot of the company, Pinkfong released the "Baby Shark" video in 2016. Now, Pinkfong has more than 27 million subscribers to its YouTube channel. The video features a young girl and boy singing about a family of sharks while clapping their arms like they are jaws. The song first went viral in 2017 when people began posting videos of themselves doing the "Baby Shark" dance with the hashtag #babysharkchallenge. In 2018, it hit the UK's Top 40 song charts in 37th place. There's even a "Baby Shark Live" tour crisscrossing the U.S. 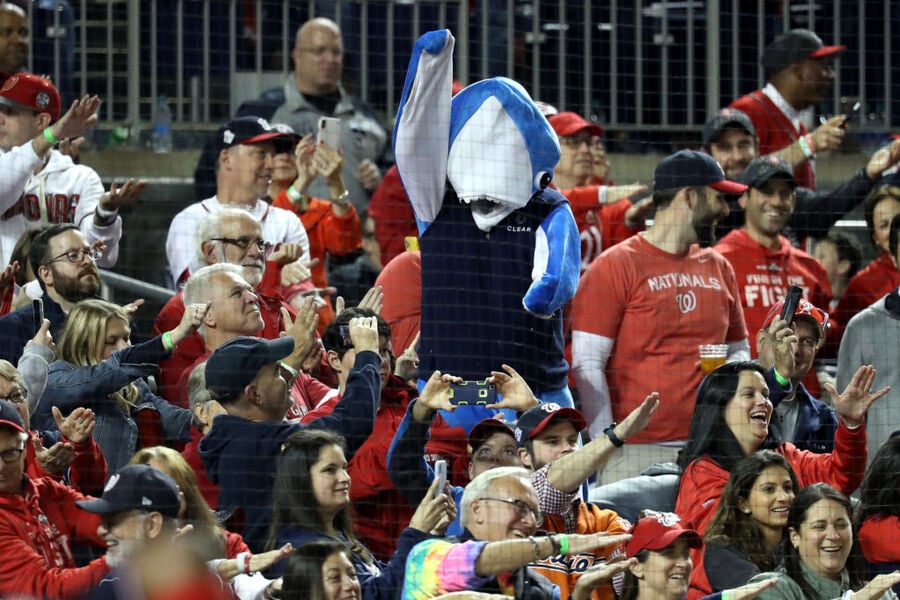 Fans take part in the "Baby Shark" song as Gerardo Parra (not pictured) of the Washington Nationals comes up at bat against the Houston Astros during the sixth inning in Game Three of the 2019 World Series at Nationals Park on October 25, 2019 in Washington, DC. (Photo by Rob Carr/Getty Images)

Kim's father runs Samsung Publishing Co., and the stakes the family has in the two companies puts their combined net worth at about $125 million. Shares of Samsung Publishing were up 89% the week of the World Series when Nationals player Gerardo Parra started using it as his walk-up song. The crowd loved it and started singing along while making the signature shark jaw arm movements. The Kim family owns 63% of Samsung Publishing, which owns 21% of SmartStudy. Kim also owns a 23% stake in SmartStudy separately.

Kim, 38, didn't set out to write an internationally hit song. He worked at gaming companies and developed content for kids at Samsung Publishing before co-founding SmartStudy to focus on the growing market for educational content for smartphones. It wasn't until "Baby Shark," however, that the startup's fortunes took a turn for the better. In 2018, SmartStudy's revenue jumped 47% to $34.3 million.

While SmartStudy tries to come up with the next viral video hit, "Baby Shark" continues to expand its market. The company recently released a version of the song in Navajo. "Lo?o?' Hashke?ii Awe?e?," which loosely means Navajo Baby Shark, is the 20th language version of "Baby Shark."