By Amy Lamare on November 18, 2019 in Articles › Entertainment

Eric Carle, the author and illustrator of beloved children's books The Very Hungry Caterpillar and The Very Busy Spider has sold his company to Penguin Random House, the world's largest book publisher. Penguin Random House will acquire the intellectual property rights to all of Carle's works. Carle has about 70 titles in print globally, including the Brown Bear series of four books which he also illustrated. Penguin Random House was already in business with the 90-year-old author as the U.S. publisher of about half of Carle's work. This is one of several investments in the children's book market the publisher has made this year.

Revenue from young adult and children's books rose 8.9% to $1.28 billion from January to August, according to the Association of American Publishers. Eric Carle's books have sold more than 145 million copies worldwide. His Eric Carle LLC has a robust merchandising component that includes toys and children's apparel. A quick perusal of items related to Carle's works on Amazon shows his books, animal flashcards, a collapsible storage box and an illustrated play mat.

Eric Carle was born in Syracuse, New York in June 1928. He lived in Germany during World War II and was conscripted to dig trenches on the Siegfried line. Carle moved to New York City in 1952 with $40. He worked for The New York Times as a graphic designer in the promotion department. He served in the U.S. Army as a mail clerk during the Korean War. Carle later became director of an advertising agency. He was asked to collaborate on the picture book Brown Bear, Brown Bear, What Do You See? which became a best-seller. He started writing and illustrating his own stories and his first works included 1, 2, 3, to the Zoo and The Very Hungry Caterpillar. 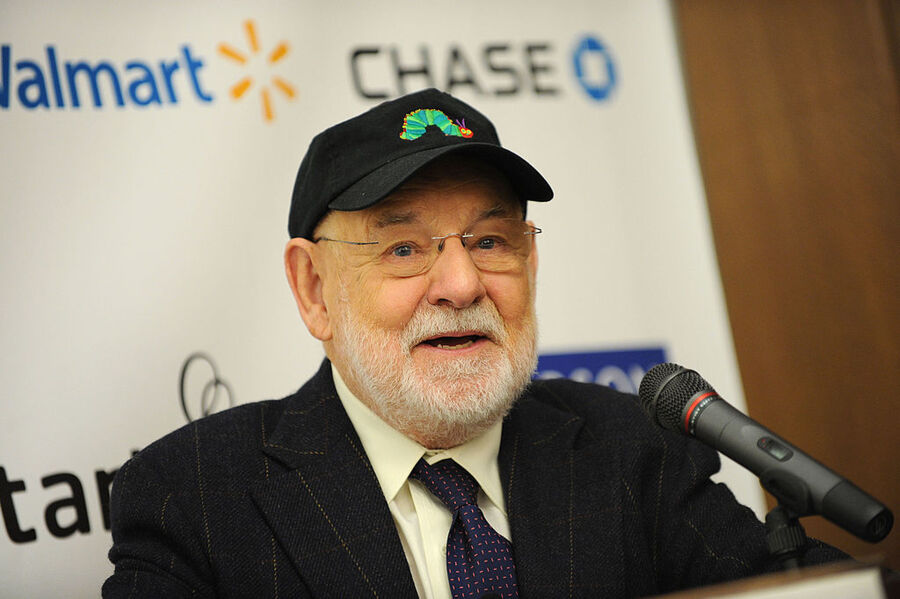 The Very Hungry Caterpillar has sold more than 50 million copies since it was published in 1969. The book teaches a number of lessons including the days of the week, basic counting, and the names of different foods. The book only has a very small amount of text and it has been translated into 58 languages. It is estimated than one copy of the book sells every minute somewhere in the world. It has been nominated for, or won, just about every major children's literature award available. In 2003, Carle was awarded the Laura Ingalls Wilder Award for his contribution to children's literature, and he was the U.S. nominee for the prestigious Hans Christian Anderson Award in 2010.

While The Very Hungry Caterpillar was a massive success, it is not the only book that Carle wrote and illustrated. Though he is most widely recognized for that early work, he has since gone on to write and/or illustrate 70 other books, many of which have become bestsellers. These works include The Grouchy Ladybug, All Around Us, All in a Day, and Little Cloud, among many others. Every year, Eric Carle earns anywhere from $5 million to $8 million in book royalties. The books have generated hundreds of millions of dollars in revenue. Today, Eric Carle has a personal net worth of $60 million.

He and his wife also run The Eric Carle Museum of Picture Book Art, a museum dedicated to children's book art, located in Amherst, Massachusetts. He says that he writes his books to "bridge the gap between home and school." With his stories he is always trying to find a way to help kids handle the fear that comes with leaving the security of home and going to school the first time. He calls that transition "the second biggest trauma of childhood" – the first is birth.

In January, Carle released a YouTube video in which he said it took him a long time to understand why that particular book sold so well. Then he figured out that "children need hope." He said that children see the metamorphosis of the caterpillar into a beautiful butterfly as confirmation that they can also become what they dream.

The financials of the deal between Eric Carle and Penguin Random House have not been disclosed. The deal is expected to close around the first of the year.