Now I ain't sayin' she a gold digger… but in today's difficult economy, getting filthy rich is tougher than ever. Luckily, some people have come up with a perfect formula for wealth and fame: just marry a rich person, and then live off them for the rest of your life! Below are five examples of spouses who should have holla'd we want prenup WE WANT PRENUP!…

Heather Mills is the one-legged ex-wife of former Beatle Paul McCartney. To be fair, Heather wasn't a complete nobody before she married Sir Paul in 2002. She's a former British model, and she even started her own modeling agency in the '80s. So Mills didn't come from complete obscurity, but she definitely wasn't a millionaire until she divorced Paul in 2006 and made off with $50 Million of his money. That sounds like a buttload of money to you and me, but Heather was actually disappointed with the settlement, since she was trying to get almost $250 Million. Heather's extremely active with a wide range of charities today, but keep in mind she's not the genius who wrote "Yesterday".

#2 The Girls Next Door

Holly Madison, Bridget Marquardt, and Kendra Wilkinson were introduced in 2005 as Hugh Hefner's "girlfriends" on the television program The Girls Next Door. It was pretty obvious right from the start that there was no way in hell these gorgeous, airheaded blondes were actually Hef's girlfriends in the traditional sense, because there's absolutely no way that those three hot chicks would be able to bed down with a middle class version of Mr. Hefner. Instead, they were using him, just like every playboy model in history, as a path to personal fame and fortune. Their plan worked like a charm, too, because all three have since launched successful solo careers with spin-off shows, book deals and endorsements. 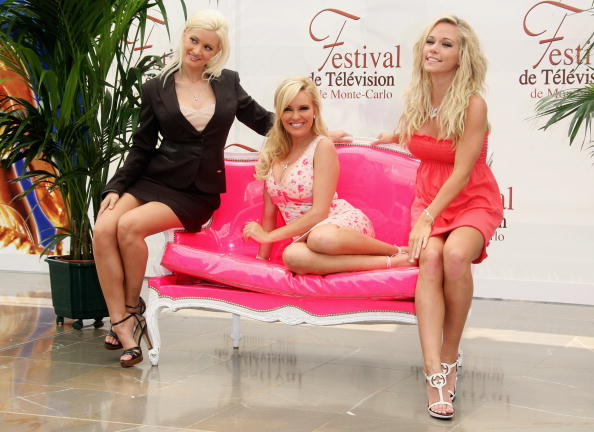 The Girls Next Door /Photo by Pascal Le Segretain/Getty Images

Marrying rich… it's not just for the ladies anymore! Case in point: Kevin Federline. Back in 2004, K-Fed was married to and expecting a child with wife Shar Jackson when he landed a gig as one of Britney Spears' backup dancers. When he saw a romantic opportunity with Britney, Kevin quickly separated from his wife (just days after she gave birth to his second child) and started dating the pop princess. Three months later, Kevin and Britney were married in an awkward, ridiculously rushed ceremony. Within two years, Kevin and Britney had conceived two hopelessly doomed children together. Not long after Britney filed for a divorce. Kevin got sole custody of the kids because at the time Britney wasn't the most mentally sound person on the planet, so Britney was ordered to pay Kevin $20k a month in child support. That's more than enough to pay for a good babysitter who he'll probably impregnate. Especially if her father is rich.

The 24 year old Anna Nicole Smith was working as a stripper in Texas when she met 87 year old oil tycoon J. Howard Marshall. Regardless of their staggering, 63 year age difference, Anna somehow magically fell in love with Howard, and soon the two were married. Howard died 13 months later, but didn't leave any money to Anna in his will, so Anna went to court against Howard's son in an effort to snag a piece of his $1.6 Billion estate. One judge initially rewarded her with half-a-billion dollars, and then another judge said she was entitled to nothing. The case dragged on for over a decade, even reaching the Supreme Court, but Anna died of a drug overdose at 39 before she could see the end of the debacle. Her only living heir, a girl named Dannielynn Birkhead, will inherit her mother's $10 million estate when she turns 18 in 2024.

Okay, so Kimora isn't a Gold Digger in the traditional sense. She didn't just marry a rich dude and try to get at his money. Instead, she married a rich dude and took over his fashion empire. Kimora's ex-husband, Russell Simmons, is the founder of Def Jam (the record label that founded Hip Hop) and the Phat Farm clothing line. The two met in 1992, dated for 6 years, got married, had two kids, and got divorced 6 years later. While they maintain an amicable relationship, Kimora has taken over the Phat Farm clothing line, started her own reality TV show, and made a name for herself as a bitchy CEO. She's making her own fortune now, but without Russell, she'd be nothing more than a gigantic, washed up, bi-racial fashion model.

So what do you think? Would you marry and sleep with someone just for their money? What if they were a 90 year multi-billionaire with less than a year to live? You're considering it aren't you….