7 Expensive Toys for the Extremely Rich

By Geoffrey Golden on July 30, 2012 in Articles › Entertainment

If you're anything like me, you're probably sitting in your solid gold yacht right now, drinking champagne with diamonds for ice cubes. As you stare at a pile of seventy million dollars, you're just wracking your brain to figure out how you're going to spend all of that stupid excess cash. Well, wrack no more, my disgustingly rich friend! There are plenty of ways to rid yourself of that annoying extra money. Here are 7 of the most expensive toys money can buy:

Do you want everyone to think you're poor? Because that's what they'll think if they see you cruising around in a boat. These days, real rich people cruise around in personal submarines, and anyone who tells you otherwise is either a poor person or a boat salesman.

U.S. Submarines' Triton 1000 is a 2-man submarine, designed specifically to be deployed from your huge mega-yacht. It's air conditioned, joystick controlled, and it has leather seats to distinguish it from crappier luxury personal submarines.

I know what you're thinking: a jetpack from Mexico? The only things that come from Mexico are drugs and fireworks. Not so! Mexico also makes some of the fastest jetpacks in the world. Case in point: the Rocket Belt can reach speeds of nearly 10 miles per hour! With each rocket belt purchase, the company also provides complimentary training sessions, a machine to manufacture your own rocket fuel, and 24/7 support – so you'll never have to wait until business hours to fly around in your jetpack again. 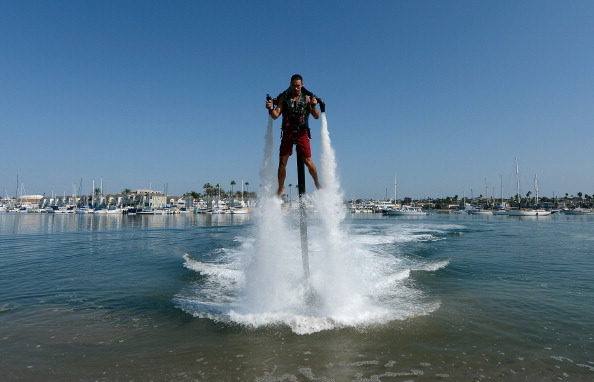 When you're rich, you can afford to do things that other people can't do, like harness the power of magnetism. People have been using magnets for a long time, but it wasn't until recently that Hover IT put magnetism to good use… by using it to create a levitating lounge chair! However, you have to provide your own cushions, because this thirteen thousand dollar chair doesn't come with them.

This luxury laptop comes equipped with a 17″ monitor and a Blue-Ray drive. Other than being plated in gold and encased in expensive wood, there's only one key difference between this $1 million dollar laptop and a six hundred dollar Sony Viao: this one is powered by a crystal. Okay, it's not technically "powered" by a crystal, but it requires the insertion of a very rare colored diamond that serves as the computer's power button, making it more than worth the $1 million price tag, right?

The biggest problem with RVs is that you can't just drive them straight into a lake. That's why the folks at Terra Wind took it upon themselves to provide rich people with a semi-aquatic RV. Now the wealthy can drive wherever the hell they want, just as God intended.

This amphibious RV is custom built for each customer and loaded with all the features and amenities you'd find in either an RV or a boat. Sure, it looks ridiculous driving around in the water, but that's a small price to pay for not having to use roads ever again.

For rich people, normal sports cars are boring. The wealthy want something different and unique, so they'll feel good about wasting tons of money. That's basically the only reason that Venturi created an electric sports car that costs over half a million dollars. It drives just like a normal sports car, boasting 250hp under the hood and a top speed of 160mph. The difference is that you'll never spend a dime on gas. It recharges completely in under 3 hours, so as long as you're speeding toward a place that has power outlets, you'll be fine.

After looking at a picture of this bathtub, you'll instantly find every other bathtub on earth to be completely inadequate. This baby's packed to the brim with a 17″ TV, 23 jets, a hand shower, and a function that automatically shuts down and drains the tub to prevent you from drowning. That's right: this bathtub will save your life. Can you say that about the crappy two hundred dollar tub that came with your rented studio apartment? I don't think so.