By Brian Warner on August 3, 2011 in Articles › Entertainment

If we've learned one thing in our lives, it's that people tend to perk up when you mention champagne. It's a hugely popular and seriously yummy drink, but sometimes companies need to go that extra mile to get the attention their particular brand of champagne deserves. Or companies selling pretty boring, run of the mill, everyday foods might want to take advantage of the prestige champagne can bestow. No matter what the situation, if bubbly is involved, someone is shelling out a lot of money.

Here are some of the craziest PR stunts involving champagne. They tend to fall into three categories like:

We've all been there. You're drinking a $75 glass of Armand de Brignac when you realize that while the #1 champagne in the world is nice and all, it would almost certainly taste better if you were in a small plane. And also upside down.

There is no way this will end badly.

Well, someone out there had the wherewithal to make that bizarre scenario happen. The Blades, a civilian aerobatic stunt team decided champagne tasting + centrifugal force = AWESOME. And thanks to the talent of the pilot (and of course, to the laws of physics) the stunt actually worked; a passenger on their little jet was actually able to imbibe while completely inverted. And no offense to Jay-Z, who has taken to rapping about Armand's "Ace of Spades" champagne after his fallout with Cristal, but being part of a once in a lifetime PR stunt like that is a lot more impressive than being just another drink mentioned in top 40 songs.

We're looking at you, Courvoisier.

While no official price is mentioned, between the champagne, fuel, and payment for the pilot, that is one expensive champagne tasting. Maybe next time they should just drive to Napa and stand on their heads.

So, OK, sure, drinking upside down on a plane is pretty impressive, but Mumm took the "crazy places to drink champagne" idea and ran with it. And then ran some more. And kept running until they had covered just about every out of the way place in the world, literally. 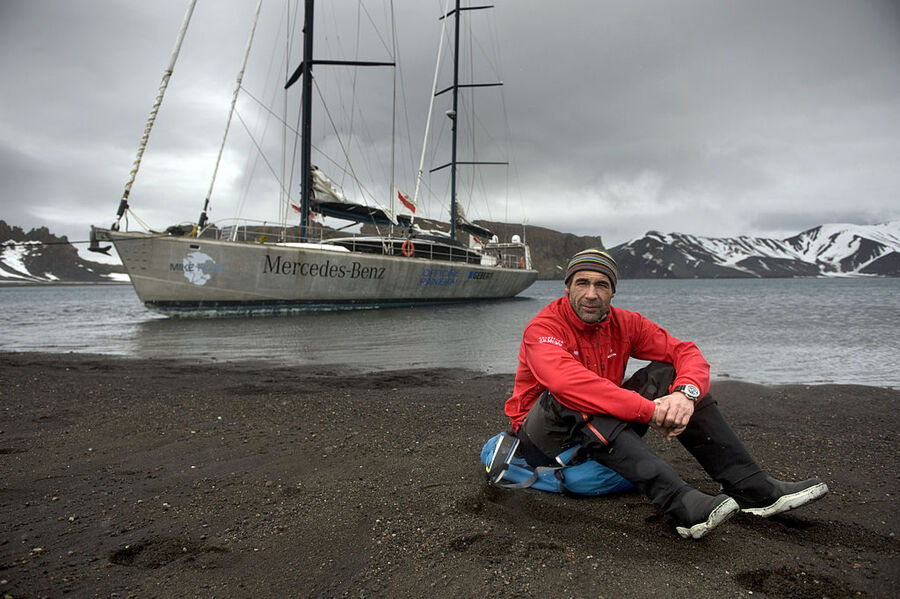 Combining two things that have absolutely no connection to each other, namely expensive champagne and caring about the environment, Mumm is sponsoring the adventurer Mike Horn as he travels around the world. His goal is to draw attention to how climate change is effecting the environment, and just judging by the flag up there, probably also to draw attention to the champagne company paying for it all. Which aspect is more important is up for debate.

The astonishing non-logic of this endeavor just gets more convoluted because on some legs of his journey Horn also brings along some Michelin starred chefs to cook in the middle of nowhere. Seriously, these renowned men have cooked up meals in the middle of the Gobi desert, on an iceberg in Greenland, and on a sandbank in the Great Barrier Reef. Whatever they cooked, we can be sure they washed it down with a couple bottles of Mumm's finest.

So what inspired Mumm to pay for such an expensive PR stunt? In 1904 a picture was taken of two French sailors in the Antarctic drinking a bottle of Mumm in the middle of a frozen wasteland, in honor of Bastille Day. Because when your balls have actually migrated up into your torso from the cold, at least you know the champagne will be well chilled. The picture became famous and is credited with being the seed for all the champagne celebrations you see after sporting events today. Which means those sea-hardened but dignified sailors up there quietly enjoying their tipple are inadvertently responsible for scenes like this:

Add a Twist and Up the Price

Every now and then champagne companies go to the old standby of "do something fancy to the bottle and charge more for it." Rarely, however, do they get the attention that Dom Perignon did when they offered 100 bottles of their 1995 vintage for the low, low price of $17,000. (You got a much better deal if you bought it in Japan, where due to the exchange rate it only cost $11k.) 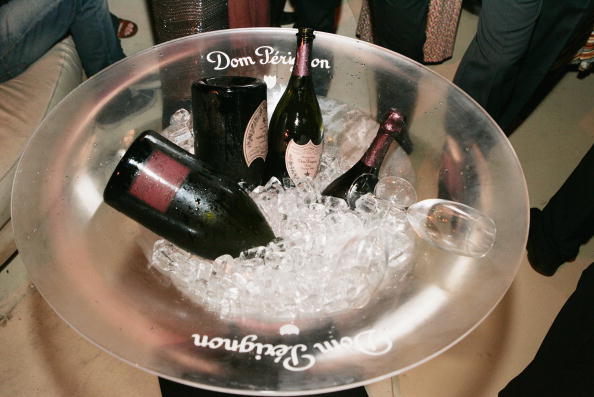 To be fair, that is a pretty good price…if you're buying a new car.

Of course these weren't ordinary bottles; that would be silly. This was three liters (about 4 regular bottles) of one of the best years in Dom's illustrious history. As you can see above it came wrapped in some sort of white gold jacket, so considering the skyrocketing gold prices right now, if you bought a bottle in 2008 you could actually get a decent chunk of that back in 2011 by melting down the packaging. Of course, if you are rich enough (and bonkers enough) to shell out $17,000 on a single bottle of champagne you probably just threw away the "wrapper" with the bottle.

Look, we love champagne as much as anyone else but at $700 a glass you'd better be orgasming with every sip or it's not worth it. 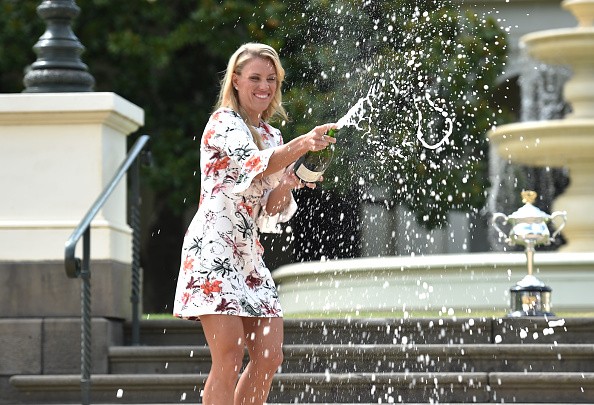 Nope, no hidden meaning here at all / PETER PARKS/AFP/Getty Images

Nope, no hidden meaning here at all.

Of course, you can throw away your money on a good bottle of champagne even MORE efficiently if you wanted to. It involves buying an amazing bottle…and then never drinking it. In fact, you would know when you purchase it that you will die without even having had one sip. You bought it specifically for the great-great-grandchildren you'll never meet, you see. Never mind that they might turn be serial killers or just annoying bastards, you're looking out for them…by spending their inheritance on a bottle of champagne. 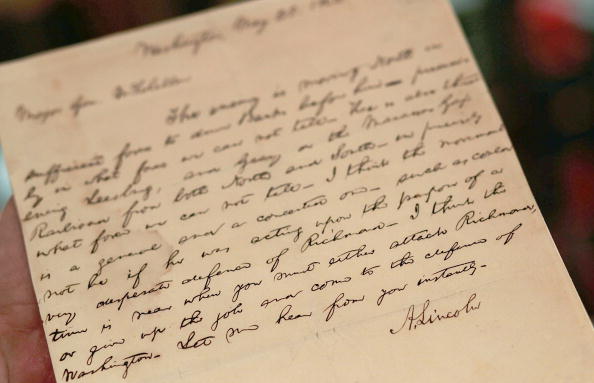 "To my daughter, I leave the beach house. To my son, enough booze to get pretty drunk for a few hours." / Chris Hondros/Getty Images

"To my daughter, I leave the beach house. To my son, enough booze to get pretty drunk for a few hours."

In honor of their 200th anniversary (making them nothing more than a petulant teenager when it comes to champagne companies) Perrier-Jouët introduced their "Living Legacy" PR stunt, in which 200 lucky (and very rich) people can shell out $10,000 for a magnum of PJ's best year. On the face of it this might seem like a better deal than the bottle of Dom but then you realize a magnum is only equal to two bottles of champagne, this bottle comes in a ceramic box, not gold, and once again, YOU WILL NEVER DRINK IT. Instead your special bottle will sit in PJ's cellar for the next century. Then in 2111 your descendants can apparently just come by and pick it up. Just which of your theoretical great-great-grandchildren the bottle would be given to, or what would happen if a purchaser's line died off, is not exactly clear.

Take Something Cheap and Add Bubbly

Burger King has had pulled some pretty weird PR stunts in the name of getting more people to eat their shitty fast food. A couple years back you could get a free burger if you unfriended 10 friends on Facebook (and they were all sent a message explaining that they were worth less to you than 1/10 of a Whopper, the ultimate burn.)

Giving people stuff for free is great and all but then the marketing geniuses behind the King's fast food realized that hey, the more money people spend in your store, the richer your company gets! This of course lead to the next obvious step: The £95 "bling burger." 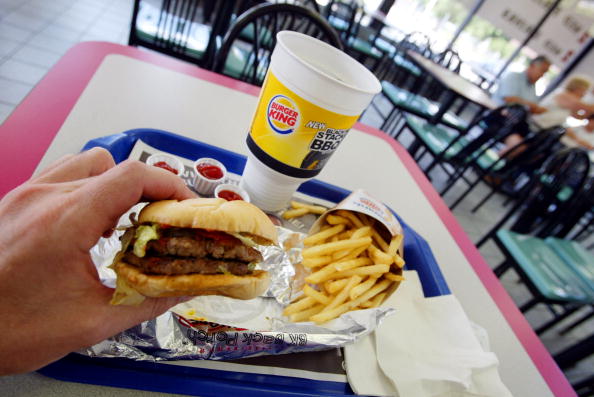 Stupidly expensive, sure, but some pretty fancy ingredients go into that burger which is made from Wagyu beef and covered with exotic offerings like white truffles, pata negra ham, banana shallots, and white wine infused mayonnaise. So where does champagne come into this? Well, half those ingredients are…oh, god this is even painful to type…fried in Cristal before they make it onto your plate. This in turn begs two questions. 1) Just how many of these was Burger King expecting to sell a day? And 2) if it was less than say, 10, just how much Cristal was wasted at the end of the day.

Actually, no matter what, the answer is all of it.

The Brits certainly seem to love adding champagne to the most random dishes but perhaps nothing in more bizarre than the limited edition "Lovers' Marmite." Marmite, for those who don't know, is a brown, gooey spread made from yeast extract. It is so rancid tasting that its actual marketing slogan is, "You either love it or hate it." 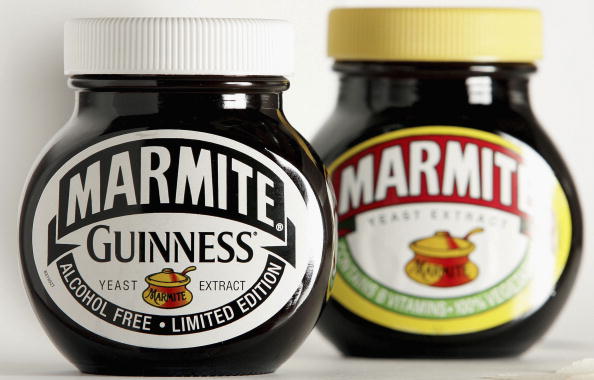 Well, I hate you. Sorry.

For those who actually love Marmite for some reason, they released 600,ooo special edition bottles that were infused with champagne. The actual champagne brand was never mentioned but we can only hope it wasn't a nice one since the delicately balances flavors would have been utterly wasted once added to the brown sticky mess.

The bottles were only about $5 so where does the expense come in? Well, the ultra swanky department store Selfridges had world famous jeweler Theo Fennell design a special silver lid for 50 pots of the stuff which they then sold for £145.

Never underestimate the power of champagne.