Forget Avatar And Titanic. The Highest Grossing Entertainment Production Of All Time… Isn't Even A Film

By Paula Wilson on October 7, 2014 in Articles › Entertainment

When we think of box office blockbusters, we think of movies like "Avatar", "Frozen", and this summer's big hit, "Guardians of the Galaxy". We think of "tentpole" films with major star power. These are the projects that make jaw-dropping amounts of money. However, in terms of box office earnings alone, there is one project that has every major blockbuster totally beat. What makes this feat even more impressive, is that the project isn't even a movie – it's a musical. Recently, "The Lion King" musical officially passed $6.2 billion in box office receipts. At that level, the musical has now earned more than "Titanic", the "Harry Potter" or "Twilight" franchises, as well as the aforementioned "Avatar", which is the highest grossing film ever. How did a musical with life-sized puppets become the highest grossing piece of entertainment ever? Turns out, it's a combination of talent, luck, and very, very good market analysis…

"The Lion King" began as an animated movie musical produced by Disney. It went into development in 1988 and after extensive rewrites, reworking, and personnel changes, the film made it to the big-screen in 1994. It went on to become the highest grossing film of 1994, won two Oscars and a Golden Globe, and holds the distinction of being the highest-grossing hand-drawn film ever. It was one of Disney's last primarily hand-drawn projects, in fact. Between its initial release and a 3D re-release in 2011, "The Lion King" has earned $987,483,777. There have also been two direct-to-video sequels and two related animated series released. However, the film's most successful spin-off, by far, is the Broadway musical adaptation.

After the success of the stage adaptation of "Beauty and the Beast", Disney was looking to continue bringing cartoons to the stage. Spurred by the positive response to the music and lyrics of Elton John and Tim Rice, with additional music and arrangements by Hans Zimmer and Lebo M., a musical theater version went into development soon after the movie blew up. Award-winning director and designer, Julie Taymor, was brought on board to shepherd the 2D film into 3D life. Her vision both paid homage to the cartoon, and took it off in a completely different direction. New songs, and song arrangements, were added; the role of Rafiki was made female, since there were no true female leads in the animated film; and Nala's storyline, especially, was expanded. The biggest shift was the look of the show. The musical employed everything from life-size puppets, to actors on stilts, to mechanical headpieces. It gave the show an edgy, highly stylized look that set it apart from the original animated production. 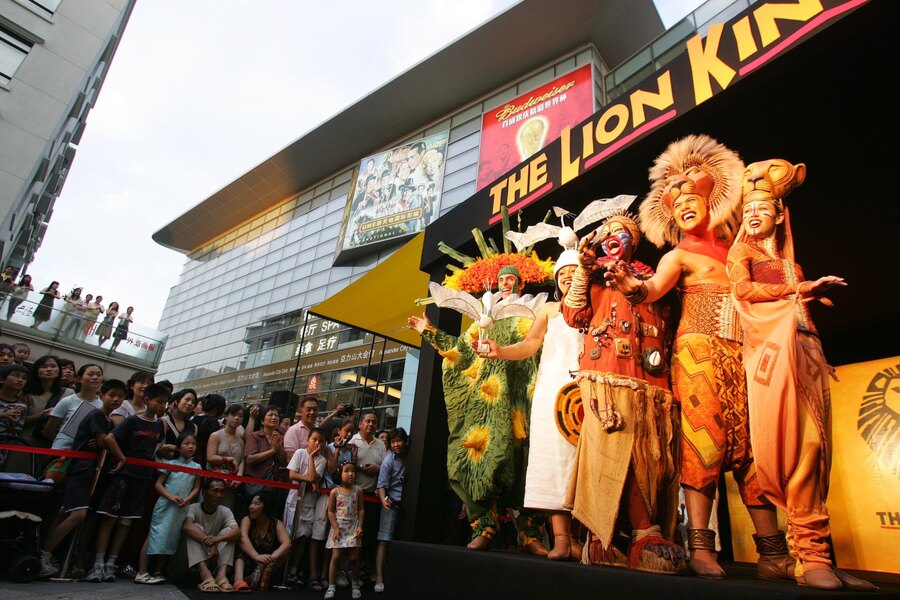 The show premiered on July 8, 1997, in Minneapolis, Minnesota. It was an instant hit. No one had ever seen anything like it. Three months later, it opened on Broadway in the New Amsterdam Theater, and has been running ever since. To this day, tickets are in high demand, and it regularly sells out its current 1,621 seat home at the Minskoff Theatre. It is the fourth longest running show in Broadway history and the top earner. Since it opened, it has spawned 23 other productions, including two U.S. National Tours, a UK National Tour, and a Japanese National Tour. It won the Tony Awards for Best Musical; Best Direction (Julie Taymor); Best Choreography (Garth Fagan); Best Scenic Design (Richard Hudson); Best Costume Design (Julie Taymor and Michael Curry); and Best Lighting Design (Donald Holder) in 1998.

The secrets to its success rest in multiple places. First, the show is excellent. The musical actually improved on the original production. Problems that existed in the script for the animated production, were solved or reworked in Roger Allers and Irene Mecchi's Tony-nominated script for the musical adaptation. Additionally, Lebo M.'s orchestrations and arrangements of the choral moments, take the show beyond the usual musical fare into something otherworldly. Second, the design is truly unique. Simultaneously sumptuous, yet spare and elegant, the show has become a favorite around the world because its aesthetic sense is attractive to a range of cultures. Third, Disney is meticulous about casting. Actors are groomed for their roles over years, sometimes, and the casting directors overseeing the various productions are known for only casting the best and brightest. Consequently, the show, no matter what country you are seeing it in, never feels stale or tired. Finally, and most importantly, Disney has come up with an analytical system that is almost fool-proof. It looks at everything from airline price fluctuations at the airports closest to the productions, to the nearly 20 years of data collected about ticket sales on each day of the year.

David Schrader, the Executive Vice President and Managing Director of Disney Theatrical Group, reportedly examines everything from weather patterns, to school holidays, to the division between ticket sales to locals, foreigners, and domestic tourists, to determine what he can charge for tickets on any given day. Having this data has allowed ticket prices for "The Lion King" to remain incredibly consistent over the years, as opposed to some other shows whose tickets can tick up into the $400 range for high-demand dates. Schrader watches the audience for "The Lion King" very closely. While tickets are by no means cheap at around $150 each, tickets for "The Lion King" have never gone above $200, unlike many other Broadway shows. The show is known for not only being excellent, fun to watch even if you don't speak the local language, and great for families, but it's also known for being, by comparison, affordable. The end result, is that the number of people coming to see the show has actually increased, especially over the last five years. This is remarkable given that the production has been on Broadway for almost two decades, and it's vying for ticket sales with flashier, newer shows like "Wicked", "The Book of Mormon", and "Once".

Even with the competition, "The Lion King" continues to make $1 million or more – per week. More astonishing is that the $6.2 billion it has earned to date is only a tally of ticket sales. It does not include sales of "The Lion King" merchandise – such as clothing, cast albums, commemorative programs, and posters, nor does it include any of the earnings from the original animated production!!! With the combination of ticket and merchandise sales, "The Lion King" musical has become an industry unto itself, and has been seen by an astonishing 75 million people worldwide. The production shows no sign of slowing down, and their are currently ten companies performing the musical around the world. With so much global love, and Mr. Schrader gauging audience interest based on everything from overlapping vacation days, to daylight savings, to the approach of flu season, it's safe to say that the show will continue to make money for years to come.