By Brian Warner on August 21, 2014 in Articles › Entertainment

A few years ago, 50 Cent and Floyd Mayweather were practically inseparable. They partied together, they took vacations together, they gambled together, they posed together in countless social media posts together and there was even talk of a 50 Cent/Mayweather reality show. On some of Floyd's biggest fight nights, 50 was front and center leading the boxer's entourage from the locker room to the ring, microphone in hand. The day Floyd finished serving a 90 day sentence for domestic battery, guess who was waiting for him outside the jail with a limo, a million dollars cash in a suit case and a private jet full of gas? 50 Cent. It was a match made in heaven for two extremely wealthy guys with lots of free time and very similar extracurricular activities. Then, seemingly out of the blue, the bromance was over in a very public and very bitter way. Over the last two years, the former BFFs have continued to trade a series of little jabs over social media and in various media interviews. But what 50 Cent did earlier today, might have taken the feud to a whole new level… 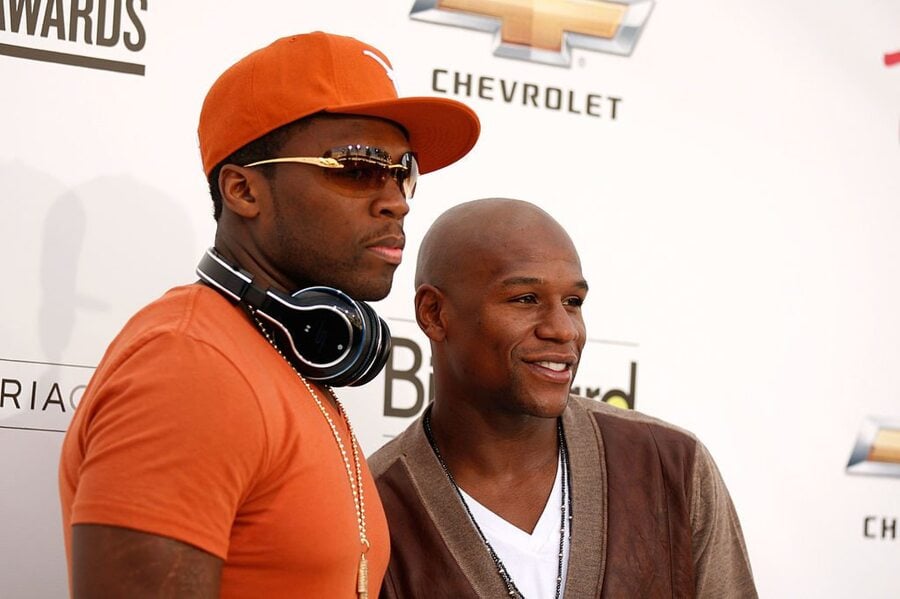 In case you are wondering, as of this writing 50 Cent has a net worth of $270 million (thanks largely to the $200 million he made from his epic Vitamin Water investment). Floyd Mayweather's net worth is $280 million. Floyd is the highest paid athlete in the world. Floyd typically earns $80-$100 million a year (before taxes) and his career earnings to date are just a shade below $400 million.

The first sign that all was not well on the Jackson-Mayweather house came in November 2012 when 50 sent out a tweet announcing that he was "no longer down with with Floyd Mayweather or involved in their partnership, TMT Promotions" (The Money Team). 50 also claimed that Floyd owes him $2 million that he invested in TMT Promotions. This set off a bitter twitter war between the former friends. At first, many fans thought the war a publicity stunt, but then some of the insults started to seem a little too personal to be a joke. For example, Floyd tweeted this picture of 50 Cent holding his belts in the ring before a fight with the caption "A male boxing groupie.. hold my belts because your album sales have declined":

Next, Floyd tweeted a photo of 50 with the caption "I respect the shooter not the one who got shot". A reference to when 50 Cent got shot with nine bullets back in May 2000. And to top it all off, Floyd followed that tweet up with this photo illustrating 50 Cent's declining album sales with the caption "Men lie.. women lie numbers don't lie. Wayne, Drake, Rick Ross, Kanye please help this boy?"

Through it all, 50 Cent sent out a few insults of his own, but none were quite as personal as Floyd's. Perhaps his harshest insult was "I can't hang out with Floyd no more, I'm tired of running from Manny Pacquiao." 50 also announced that he was selling a closet full of his TMT Promotions gear for just $1.

The beef seemed to cool off, or at least go away for a while, until earlier this week when Floyd gave an interview with a website called M-Live.com. In the interview, Floyd took a couple of not-so-vague jabs at the hip-hop community. Here's what he said:

What's so crazy is this: You know, when people are not relevant, and they're not moving units like they were once moving … you've got to realize, I've been relevant for 18 years.

Earlier today, Floyd's not-so-subtle insults in the M-Live interview made their way back to 50 Cent. So, this morning 50 posted a video on instagram in which he says: "I just woke up. I looked at the computer and the computer say that Floyd Mayweather said 'fuck TI, fuck Nelly, fuck 50'. I'm like, why he say fuck me for? Nelly's the one who fucked your first baby mama Melissa then took your fuckin fiancee. Say fuck that [email protected]*a!"

One hour later, 50 posted another video to instagram in which he basically tells the whole world that Floyd Mayweather might be illiterate. More specifically, 50 says that Floyd wouldn't be able to read a whole page of a Harry Potter book "out loud without starting and stopping or fucking up". And to prove his point, 50 Cent offered to donate $750,000 to the charity of Floyd's choice if he goes on Jimmy Kimmel Live and completes the challenge. Here is that video:

For his part, Floyd has been uncharacteristically silent today. He has only made one post today on social media and strangely, it was a photo of him doing Bikram yoga. So does that mean he isn't going to accept the challenge? And if that's the case, does that also mean he really can't read? This is a pretty embarrassing way for the world to find out, but it's not like Floyd is an innocent bystander here, as you've just seen.

We'll keep you posted if there any new updates or responses in this escalating beef. In the meantime, what do you think of this 50 Cent/Floyd Mayweather feud? Do you think Floyd really wouldn't be able to read a page of Harry Potter book???