What's Going On With 50 Cent And Floyd Mayweather?

By Brian Warner on November 15, 2012 in Articles › Entertainment

Something strange is going on right now between 50 Cent and Floyd Mayweather. Up until recently, the boxer and the rapper have acted like total BFFs. 50 has been a ringside fixture at all of Floyd's boxing matches and has even walked him into the ring, holding his belts, on a number of occasions. In fact, the only real time these two seem to have been apart was when Floyd spent 90 days in a Las Vegas jail for assaulting his ex girlfriend. So what happened to end their friendship so suddenly? Is it real or just a publicity stunt? And in a truly bizarre twist, today 50 Cent agreed to end the beef by fighting Floyd for $5 million a piece. What is going on???

Last week, boxing and rap fans were a little surprised when 50 Cent tweeted that he was no longer "down with" with Floyd Mayweather or involved in their partnership, TMT Promotions (The Money Team). Soon after, a bitter twitter war erupted between the former friends. Some fans called the war a publicity stunt but some of the insults seemed a little too personal to be a joke. For example, Floyd tweeted a picture of 50 Cent holding his belts in the ring before a fight with the caption "A male boxing groupie.. hold my belts because your album sales have declined". 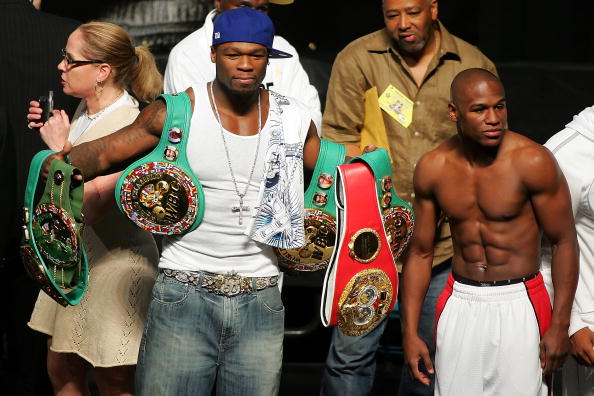 Up until this point I could sort of imagine this being just a PR stunt to get attention, but then Floyd started to cross the line. He posted a photo of 50 with the caption "I respect the shooter not the one who got shot". A reference to when 50 Cent got shot with nine bullets back in May 2000. Isn't that a little too personal to be a hoax? And to top it all off, Floyd then posted this chart showing 50 Cent's declining album sales with the caption "Men lie.. women lie numbers don't lie. Wayne, Drake, Rick Ross, Kanye please help this boy?"

Through it all, 50 Cent made several threats of his own but none were quite as personal as Floyd's. Perhaps his harshest insult was "I can't hang out with Floyd no more, I'm tired of running from manny pacquiao." 50 also announced that he was selling a closet full of his TMT Promotions gear for just $1.

While this war was waging over twitter, the Nevada State Athletic Commission announced that they had approved 50 Cent's promoter's license. 50 originally applied for his license as a partner in TMT Promotions, but now he says he is forging on without Floyd. 50 told reporters that he has already invested $1.5 million signing fighters and plans to spend an additional $2-4 million on talent.

As if this story wasn't bizarre enough already, today internet billionaire Alki David announced that he was willing to pay 50 Cent and Floyd Mayweather $5 million a piece to end their feud once and for all in the ring. Amazingly, 50 Cent immediately agreed to the fight! He announced "I'll fight him, Dec 14th is too soon. I would need time to get in shape. I'm 204 right now I hit that boy he will see a white light." How amazing would that be to watch?

What do you think is going on between 50 Cent and Floyd Mayweather? Is this all a big publicity stunt, or do they really hate each other?