We spend a lot of time here at Celebrity Net Worth deifying the start up and dot-com founders who struck it rich. However, the relatively brief history of the Internet is riddled with dot-coms that no longer exist. The late 1990s dot-com boom (and bust) was like the Wild, Wild, West. Dot-coms launched, raised crazy amounts of money, spent even crazier amounts of money, and folded left, right, and center – often spectacularly. It seemed like every single day a new dot-com was going to change the world. I worked for one myself back then – hsx.com – The Hollywood Stock Exchange. We were all going to become dot-com millionaires – all of us – every single person who worked at a dot-com and had stock options was going to see their ship come in. Yeah, that didn't work out. It certainly didn't work out for the five dot-coms listed below, all of which were good ideas and had a measure of success before they folded.

To be fair, this is sort of an honorable mention. Ah, GeoCities. I taught myself HTML coding and built several websites at this Web hosting service. GeoCities was founded in 1994 by David Bohnett and John Rezner and was called Beverly Hills Internet (BHI) for a short time. Site users would select a city on the site in which to place their web page. The cities were used to classify web pages and were named after real cities or regions. For instance, computer-related sites were located in Silicon Valley, entertainment were placed in Hollywood, etc.

In 1998 GeoCities went public and was the third most visited site on the Internet behind AOL and Yahoo. The site had 19 million unique visitors each month.

GeoCities languished under Yahoo's care and over time the rise of MySpace, BlogSpot, Facebook and other sites caused GeoCities' dated platform and model to fade from popularity.

GeoCities existed for a lot longer than many people may be aware of. Yahoo officially pulled the plug on the pioneering social media site in the U.S. on October 26,2009. GeoCities is still in operation in Japan.

Drkoop.com was a health information website co-founded in 1998 by former Surgeon General Dr. C Everett Koop. It quickly found an audience and was ranked the top health care site on the Internet with 1.4 million unique visitors per month in 1999. The dot-com made a huge splash when it raised $88.5 million at its June 1999 IPO. A month later Drkoop.com caught the attention of AOL when the site's stock hit a high of $45.75 per share. AOL and Drkoop.com entered into an $89 million, four-year deal to display Drkoop.com content on AOL.

And then the bubble burst and Drkoop.com, like so many other sites, quickly started hemorrhaging money. By 2000, Drkoop.com was losing tens of millions of dollars each quarter. Investors had become skeptical of a site that didn't actually SELL anything. Drkoop.com relied on ad revenue in a time that was pre-Google AdSense. Drkoop.com went out of business in December 2001.

Webvan.com is largely considered to be the dot-com bust's biggest flop. This grocery delivery service expanded too fast. At its peak it offered service in 10 U.S. cities/regions: San Francisco, Sacramento, Los Angeles, Orange County, San Diego, Dallas, Chicago, Atlanta, Portland, and Seattle. In the summer of 1999, the company announced it was making a $1 billion investment in warehouses, bought a fleet of trucks, and planned to expand to 26 additional cities by 2001.

The company went public in November 1999 and raised $375 million. The company was valued at $1.2 billion and shares were trading at around $30. However, that was at its peak.

Investors quickly realized that though popular, Webvan's customer base and profits were not large enough to offset the planned expansions.

Webvan shut down in July 2001. Its stock was trading at six cents per share. The company laid off 2,000 employees when it flopped. 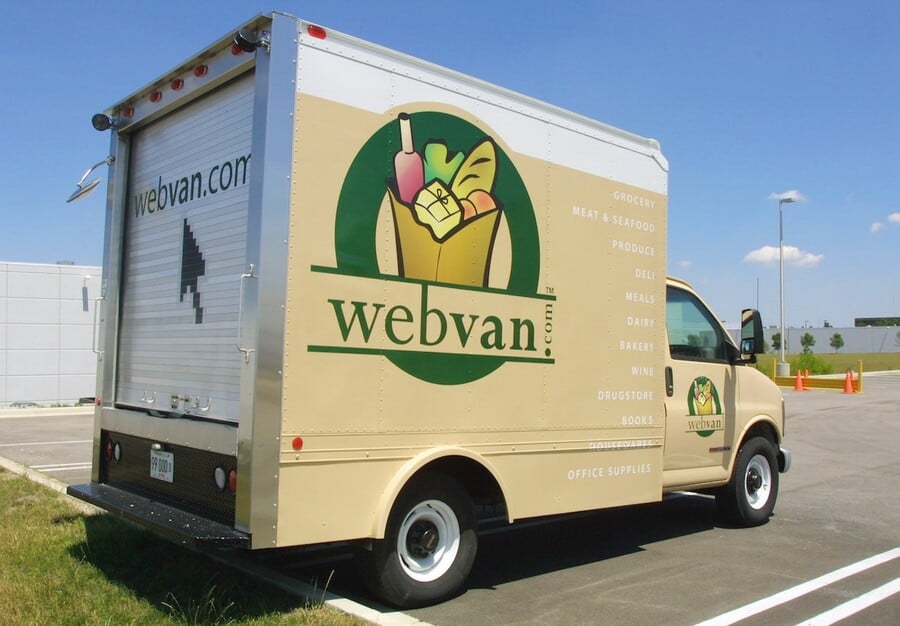 Online toy retailer eToys.com launched in 1997 and quickly became the go to site for holiday shopping. In 1999, eToys held an IPO. Shares were issued at $20. At the end of the first day of trading, the stocks closed in at $76 a share. In October 1999, eToys.com shares hit a high of $84.35. Just 16 months later, their stock was worthless. They reported a $75.5 million loss in the last quarter of 2000 and had just enough cash to get by until March 31, 2001. The company never found an investor and with $247 million in debt, eToys.com filed for bankruptcy in February 2001. KB Toys bought the site out of bankruptcy before filing for bankruptcy itself. Today the domain is owned by Toys R Us.

Of all the companies that imploded during the dot-com bubble, Pets.com goes down in history one of the most spectacularly disastrous of them all. The Pets.com sock puppet mascot has become synonymous with the dot-com bust. Pets.com launched in August 1998. Selling pet food online seemed like a no-brainer, but the Pets.com business model was just not sustainable. The company went public in February 2000 and at its peak had a share price of $14. In the first nine months of 2000, the company lost $147 million. Share prices fell below $1. The company went out of business in November 2000, just 268 days after its IPO. More than $300 million of investment capital had evaporated and roughly 300 people lost their jobs.