By Brian Warner on March 24, 2015 in Articles › Entertainment

There are a full 39 days before Floyd Mayweather and Manny Pacquiao step into the ring, but we can already guarantee that this will be the richest boxing matchup the world has ever seen. Early projections for total revenue generated by the match was pegged at $300 million. Those projections have been increased to $400 million, and might go even higher. Regardless of where the final revenue number lands, the bout will undoubtedly break records in every single category of potential revenue. Those categories are: 1) Live Gate – money earned from selling tickets at the actual venue, 2) Pay Per View, 3) Foreign Rights, and 4) Primary Sponsorship.

The current live gate record is $20,003,150 and was generated when Mayweather fought Canelo Alvarez at the MGM Grand in September 2013. For that fight, ticket prices ranged from $350 to $2,000 and every single ticket sold out in under 24 hours. When Mayweather-Pacquiao was announced a month ago, analysts predicted their live gate would double that record to $40 million. That projection was based on the idea that tickets would sell for $1,000 to $5,000. Well, turns out those projections were way too low. As of right now, the majority of tickets are selling from $1,500 to $7,500. And approximately 1,100 tickets are priced at $10,000 per seat! After promoters shuffled the prices around, the new live gate projection is $74 million. That's a 270% increase over the previous record.

The current Pay Per View buy record was set in 2007 when Mayweather fought Oscar De La Hoya. For that match, 2.4 million people in the US alone paid $56 to tune in from home. That generated a record $136 million in domestic PPV dollars. To order Mayweather-Pacquiao, fans will have to cough up $100 for the HD stream. As of right now, a minimum 3 million people are expected to buy the fight Floyd/Manny bout. That will bring in $300 million. More than doubling the previous record. 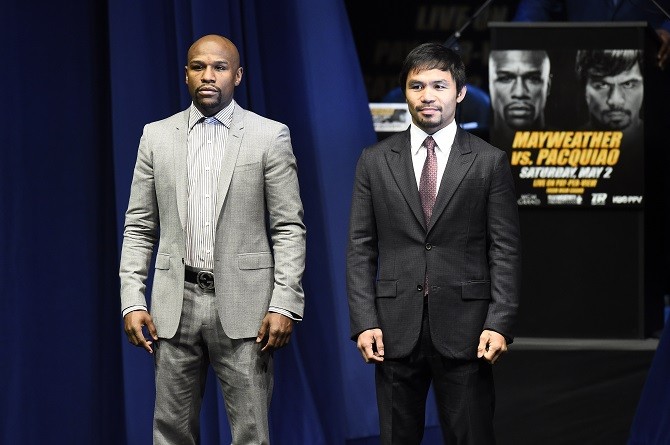 Today, Manny's promoter Bob Arum announced that the foreign TV distribution rights had been sold for a record $35 million. Of that $35 million, $10 million was paid by a company called Solar for the rights to air the match in Manny's home country of the Philippines. In Mexico, demand was so high from rival networks that they both ended up paying around $1.1 million to have broadcast rights. So the match will be on two channels in Mexico!

Whatever money ends up being generated by the fight will go 60% to Floyd's side, and 40% to Manny's. If the $400 million number is accurate, after costs are taken out, Floyd is projected to personally earn $150 million with Manny getting $100 million.