By Joseph Gibson on June 13, 2012 in Articles › Entertainment

In news that will probably make car buffs die a little inside, a man has attacked a Ferrari 612 Scaglietti parked in a garage with an axe for seemingly no reason. It happened in Edinburgh, Scotland, where the car's owner Rajinder Singh left the $321,000 car in a garage for repairs. While the car was in the garage, Singh received a disturbing phone call: That an anonymous mystery man was caught on video surveillance camera smashing the car with an axe and slashing the tires with a knife before walking away. 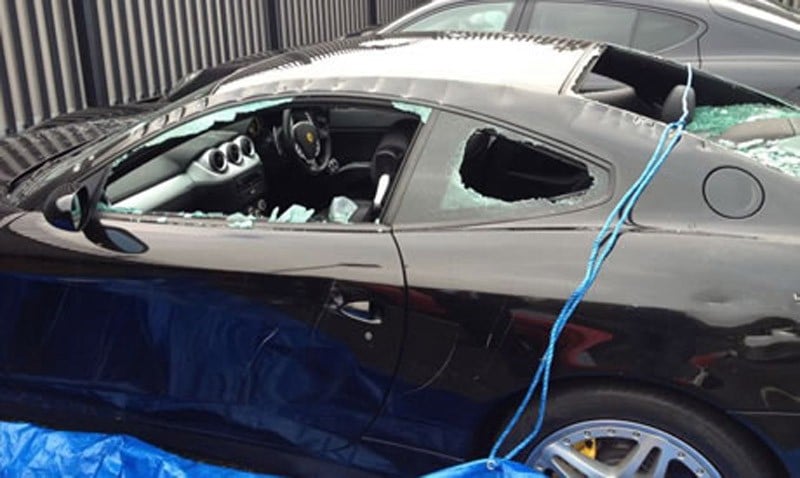 No one knows why the man performed this act of vandalism – but the police say that they're out of leads while Singh claims that no one who knew him could have known where his car was for repairs. So the evidence seems to suggest that this was an anonymous crime of passion, in which the perpetrator smashed the car (and caused around $62,000 in damages) simply at random.

It's a pattern that is somewhat on the rise in recent years, as discord over growing economic disparities in modern society continues to grow and grow. One unlucky individual with a nice car happens to park it in a publicly accessible place, and a disaffected person with an axe to grind takes it out on the car.

As for this specific car, it's a doozy. The V12-engined Scaglietti was at one time the flagship supercar of manufacturer Ferrari before it was replaced in this position by the FF in 2011. It's got a top speed of 196 miles per hour and can accelerate from 0 to 60 miles per hour in just under 4.5 seconds.

It's not known if the car will be able to make a recovery from the attack, although the owner has expressed a fear that he will have to simply write off the car as a loss rather than get the necessary repairs.