In 1997 Microsoft Saved Apple From The Brink With A $150 Million Lifeline. What Ever Happened To That Investment?

By Amy Lamare on August 18, 2020 in Articles › Entertainment

I realize this might be hard to imagine, but there was a time not that long ago when Apple was in dire financial straits. Today, Apple is literally the largest company in the world with a market cap of $2 trillion. But back in 1997, soon after Steve Jobs returned from a forced 12 year hiatus, Apple was just 90 days away from going completely bankrupt. As a result of a string of problems with their machines, a few staggeringly dumb business decisions, and products that were perceived as clunky and unpopular, Apple was in a very bad position. Can you imagine a world without the iPod, iPhone, and iPad? That was just three months away from happening! The reality is that Apple only exists today thanks to a last minute lifeline from Bill Gates and Microsoft. Their lifeline mainly consisted of a $150 million cash infusion. So what ever happened to Microsoft's investment???

In 1996, Apple was at an all time low. Apple's shareholders and customers had lost all faith in the previously revolutionary company and the competition was closing in FAST. Apple may be a press darling today with journalists fawning over their sleek designs and innovative ideas, but 1996 was a very different story. Worldwide press loved to pile on stories of Apple's ineptitude week after week.

Prior to 1996 Apple was doing pretty well. They shipped 1.3 million Macs and had $3.1 billion in revenue for the period ending December 1995. Unit sales of Macs had increased 26.9% for the first ten months of 1996. Macs were the de facto computer for U.S. schools, ad agencies, and creative professionals such as Web and graphic designers.

However, events in 1995 put Apple on the path to ruin. In August 1995, the PowerBook 5300 came out. It was the first PowerPC based PowerBook and it was hotly anticipated. Unfortunately, many of the first units shipped were dead on arrival. Other machines had issues with the Sony lithium-ion batteries bursting into flames. The PowerBook 5300 also had bad, buggy system software. Apple was forced to recall the entire product line. This fiasco caused Apple to lose huge market share in laptops. It would be years before they were able to get that back.

Also in 1995, Apple began to license the Mac OS to third party vendors in an attempt to gain market share. The Mac clones were some of the fastest personal computers on the market in 1996, affecting Apple's bottom line. In December 1995, a Power Computing Mac clone cost $3,344. The Power Macintosh 9500 cost $6,560. Though the clones were created to help Apple, in reality they were killing the company. As a result, Michael Spindler was ousted as CEO and replaced by Gil Amelio in 1996.

It is truly hard to remember a time when Apple products were considered clunky and unattractive. Under new CEO Amelio, Apple released the Newton family of products including the eMate 300 laptop. Although the Newton would be reborn years later as the iPad, not killing this product in 1996 was one of Amelio's giant mistakes. To be fair, Amelio was handed a huge mess and told to sort it out. He cut Apple's costs, reduced the workforce by thousands, and ended the Copland OS project. But he failed to recognize the lack of viability for the Newton products. Amelio's saving grace in Apple history is that Apple acquired a little-known company called NeXT for $402 million. NeXT's founder and CEO was none other than Steve Jobs. The most valuable result that came out of this acquisition was that it brought Steve Jobs back to Apple as a consultant in 1997.

Steve Jobs did a number of things to bring Apple back to success. He introduced Mac OS 8 in July 1997. It was enormously successful with 1.2 million copies selling in the first two weeks and three million within six months. Jobs would go on to shepherd Apple's reinvention. He introduced the iMac, the iPod, the iPhone, and the iPad, to name just a few of Apple's releases since Jobs' second tenure with Apple. But none of these amazing innovations would have been possible without a little help from their arch rival:

At the keynote of the MacWorld conference in Boston in 1997, Jobs shocked the audience when he announced a five-year partnership with Microsoft that would include cross-licensing of patents, bundling Internet Explorer as the default browser on new Macs, the continuing development and support of Microsoft Office for the Mac, and a collaboration on Java. Perhaps most importantly, Microsoft would be injecting a $150 million cash investment by purchasing Apple stock.

This deal was hard for both Apple and Windows aficionados to swallow. It was sleeping with the enemy. Except it really wasn't. This deal ultimately was mutually beneficial to both companies. Steve Jobs put it best when he said, "We have to let go of this notion that for Apple to win, Microsoft has to lose."

That was the truth. Apple got a desperately-needed lifeline out of the deal, Microsoft kept a failing competitor in business, which helped them because it weakened arguments that the company was a monopoly.

As you've no doubt seen, ever since this partnership was announced, Apple has been a massive success story from every angle. Apple's $2 trillion market cap makes them the most valuable company in the world. By comparison, Microsoft's current market cap is $1.6 trillion.

What happened To Microsoft's $150 Million Investment?

For their $150 million investment, Microsoft received 150,000 shares of Apple preferred stock which were convertible to common shares of Apple stock at a price of $8.25 per share. MSFT would not be allowed to sell any shares for a minimum of three years. By 2001, Microsoft had converted all of its preferred shares into common stock, which equated to around 18.1 million common shares. 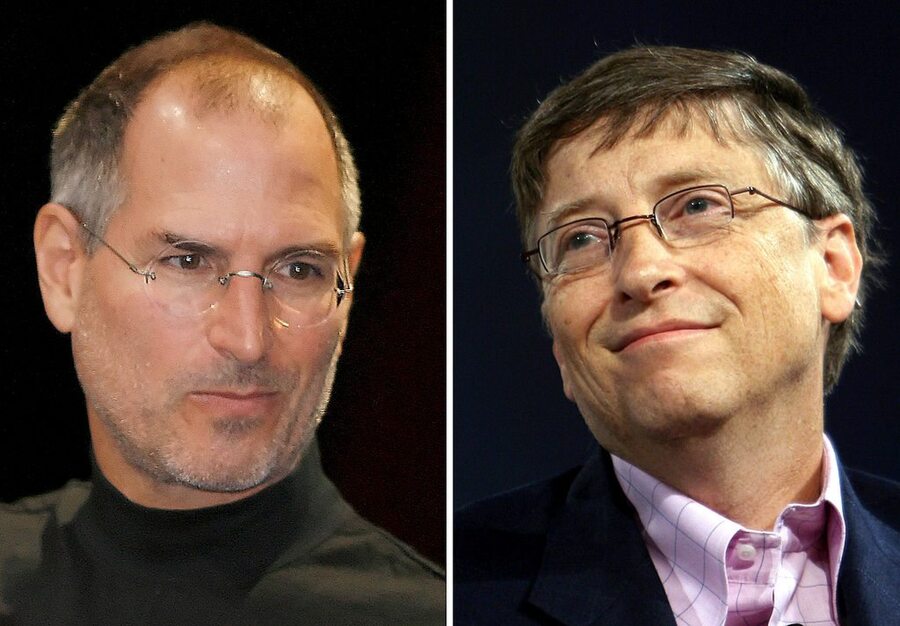 Microsoft slowly started to sell off its stake in 2002. By the middle of 2003, they had sold off all of their Apple shares. At the time Microsoft sold its stake, Apple's market cap was around $7 billion. In total, Microsoft netted $545 million off its $150 million investment. That's a 260% return in six years. Not bad! Right? Well, wait till you hear what their investment would have been worth today.

What if Microsoft had held onto its Apple stake?

Since the agreement between Apple and Microsoft, the stock has split three times. It split on a 2-for-1 basis twice; once in June 2000 and again in 2005. After these two splits, MSFT would be left with 36 million common shares. The stock did a 7-1 split in June 2014 which would mean today MSFT would have owned 252 million Apple shares.

How badly does Bill Gates regret not having a little more faith in Apple! I guess the lesson here is if you believe in a company enough to give them $150 million as death knocks at their door, why not keep riding when they're back to kicking butt? Then again, hindsight is always 20/20.