If you've ever been on a road trip around the United States, there's a very high probability that you've encountered a Love's Travel Stop. Situated just off long stretches of lonely highways, the bright red heart shaped sign and welcoming interior have soothed road weary travelers and truck drivers since 1964. It's hard to imagine, but there was a time when convenient stations to refuel your car and your stomach simply did not exist. Driving long distances was a very lonely endeavor. That all changed thanks to Tom and Judy Love and their creation, Love's Travel Stops & Country Stores. Tom and Judy started their empire with just $5000 and today it's worth billions. And, believe it or not, none of it would exist without the 1970s gas crisis!

Tom and Judy Love married in 1961. Three years later they took their entire life savings, roughly $5000, and leased an abandoned gas station in Watonga, Oklahoma – a town an hour northwest of Oklahoma City. In case you were wondering, $5000 in 1964 is worth the equivalent to $38,000 today. Tom and Judy named their fledgling company the Musket Corporation. Over the next eight years, Musket opened 40 additional gas stations around Oklahoma. The decision to operate gas stations isn't as random as it may seem. Tom Love is the son of an Oklahoma oil man and knew how important it would be in the future to have convenient refueling stations all over the country.

Anyone reading this who is over the age of 40 might recall that the United States faced a disastrous oil shortage in the 1970s. This crisis caused the price of gas to sky rocket. That combined with an extreme shortage of gas in general forced people to wait in extremely long lines at pumps all over the country just to fill up. It was common for people to park their car in a line at a gas station then wait 4-4 hours for their turn to fill up. And keep in mind, this is way before iPhones, iPads, satellite radio. You just had to sit there. In the summer months you'd sit there melting in your leather seats. It was a miserable situation.

Businesses like Tom & Judy Love's gas station mini-empire were being decimated by this crisis. In order for the company to survive, something needed to change. FAST. After months of brainstorming, Tom and Judy came up with a plan. Instead of letting people just sit in their cars mindlessly for hours and hours, they might as well give them a chance to get another very important errand done: Grocery shopping. The Love's decided to use their original Watonga location to test a revolutionary new concept. They would launch the first ever combination gas station and supermarket. Now while they waited for their turn to fill up, patrons could shop for all of their groceries or grab a bite to eat in an clean, comfortable and air conditioned market.

The Loves added a grocery line to their now self-service fuel sales, becoming one of the first in the U.S. to offer one-stop shopping for travelers. Not surprisingly, these "Mini Stop" were a MASSIVE success with customers. The Loves soon expanded the concept to all of their gas stations across western Oklahoma.

In 1972, Musket Corporation began the process of converting the rest of its locations from simple gas stations to convenience stores with self-serve gas. The following year, the Loves decided to rebrand their company to something friendlier. The new name they chose was Love's Country Stores. 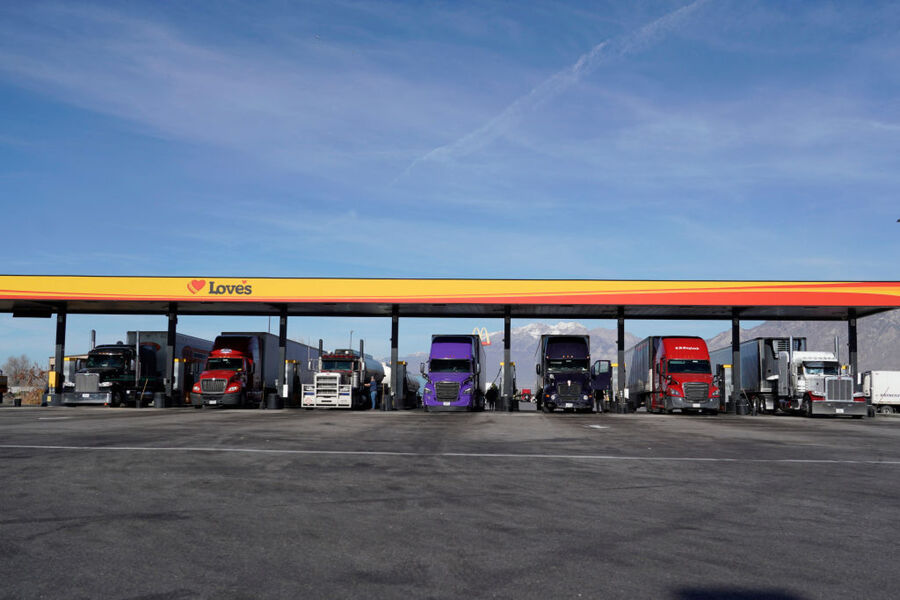 Love's Country Stores grew to 60 locations by 1978, located in small towns throughout Oklahoma, Colorado, New Mexico, Kansas, and Texas. The stores also debuted the Fresh Daily Deli that year. Today, they are known as Love's Subs, but back in the late 70s, they were among the first road side stop to offer fresh sandwiches made daily on site. The debut of the deli also became the third profit center in each Love's location, adding to the convenience store and self-serve gasoline.

By late 1981, Love's was operating 100 Country Store locations. That same year, the company opened its first Love's Travel Stop on Interstate 40 in Amarillo, Texas that added self-serve diesel fuel to draw in professional truck drivers to the business. Love's Travel Stop was one of the only places to cater to both the professional truck driver and the regular traveler in one location.

By the mid-80s, Love's added gifts and other novelties to their shops, making them a wonderland for children released from the confines of long car trips. Beaded "Indian" style coin purses and wallets, jerky and licorice in every flavor, troll dolls, colored pens and pencils—parents could get a modicum of relief as the kids figured out just how they wanted to spend their meager allowances at a Love's Travel Stop.

The one thing Love's has done expertly is grow their business. Steady and measured growth has resulted in success after success for the company. In fact, in 2000, the company was awarded the Outlook Award for innovations and outstanding contribution to the future of the convenience store industry by the Sales & Marketing Executives International group. I'd say that was an award that was well deserved.

Today, Love's is one of the 10 largest private companies in America. The company operates more than 300 stores in 39 states with plans to open 20-25 new locations each year. Love's has remained a family owned business with Tom Love leading the way and his three adult children taking over key roles.  Today the company generates more $26 billion in revenues annually.

Tom & Judy Love started out with a single location and $5,000 in startup capital. After more than 50 years of business and marriage, today they are worth a combined $3.6 billion.  They are probably the only people in America who look back on the 1970s gas crisis with extremely fond memories. The next time you take a road trip and happen upon a Love's Travel Center, remember that this multi-billion dollar business started 50 years ago with just $5,000.