The 10 Wealthiest Families in America

By Paula Wilson on December 5, 2014 in Articles › Entertainment

If there was ever a sign that the 1% truly exists, it'd be amount of money held by the wealthiest families in America. According to Forbes, if you add up the amount held by the 185 wealthiest US families, they are worth $1.2 trillion. Pretty mind-blowing, huh? To give you just a taste of who occupies our monetary upper echelon, here is a quick rundown of the Top 10 Wealthiest Families in America. The combined net worth of the Top 10 families accounts for $519.9 billion of that $1.2 trillion already mentioned. No, your eyes aren't deceiving you. Half of the $1.2 trillion is controlled by just ten families. 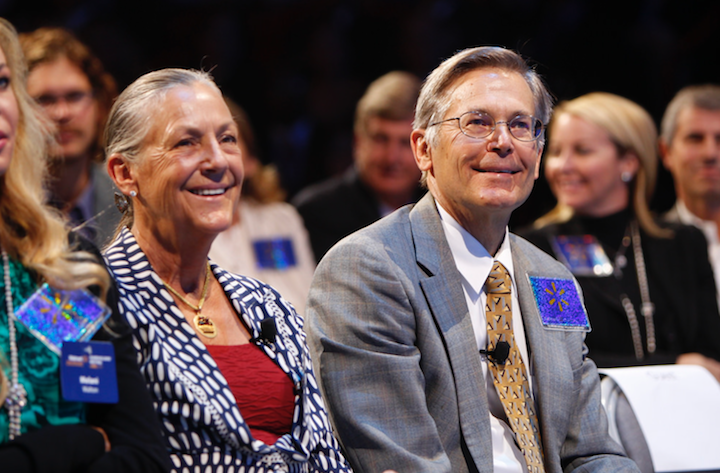 Photo of Alice Walton and Jim Walton via Walmart/Wikimedia Commons

Dan Duncan was born on January 2, 1933 in Shelby County, Texas. He began working with his father as a pipeliner and roughneck in oil and gas fields after he graduated from high school. He went on to serve in the U.S. Army, and then attended Massey Business College. He subsequently co-founded Enterprise Products Company in 1968. The company went public in 1988, and by 2010, Enterprise was in charge of almost 50,000 miles of pipeline, both on and offshore. Dan also ran a number of smaller energy related ventures. He passed away in 2010, leaving his wealth to four children.

Samuel Curtis Johnson, Sr., founded Johnson's Prepared Paste Wax Company in Racine, Wisconsin in 1886. Since then, the company has grown to become S. C. Johnson & Son. The business, which is now managed by the fifth generation of the family, has branched out into all things household cleaning related. They also manufacture products for cleaning cars and shoes, and a line of pest-control products. If you own a home or apartment, odds are, you own products by S. C. Johnson. The company now has offices in 72 countries with 12,000 employees. You can purchase S. C. Johnson products in 110 countries.

The Pritzker Family is the royal family of hospitality. Back in 1957, brothers, Jay and Donald Pritzker founded Hyatt Hotels. Their one building, the Hyatt House, near the Los Angeles Airport, has since grown to 490 hotels worldwide, employing over 75,000 people. The family company, now known as the Hyatt Hotels Corporation, also owns AmeriSuites and Summerfield Suites. Their money doesn't just come from hotels, however. A third brother, Robert Pritzker, founded the Marmon Group, a conglomerate of companies (now controlled by Berkshire Hathaway) with interests in electronics, transportation equipment, retail, and construction.

Cox Enterprises was founded in 1898 in Dayton, Ohio, when James M. Cox, purchased the Dayton Daily News. It grew from there, and now has multiple business arms. There is Cox Communications, their broadband and entertainment arm; Cox Media Group, which is in charge of television and radio, their newspapers, various publications, and over 100 digital offerings, as well as Valpak and Savings.com; and Cox Automotive, which oversees digital and marketing software for car dealers. The company is currently run by James M. Cox's, grandson, Jim Kennedy.

Hearst Family scion, William Randolph Hearst, was the man behind the United State's largest newspaper company. He completely changed the face of journalism and wielded immense power and influence throughout the early 1900s. His family was almost viewed as royalty. The multiple generations of the Hearst clan now own major properties around the country and control an extensive art collection. The family net worth is spread out amongst the 64 living members of the family, almost all of whom are successful businesspeople in their own right.

Founded in 1946 by Edward C. Johnson II, Fidelity has grown to be one of the largest and most successful money management firms in the world. It currently administers $4.0 trillion in assets and manages another $1.8 trillion. They also oversee $230 million in overseas assets. The company has 20 million investors, and 500 different funds, spread out across three fund divisions, Equity, High-Income, and Fixed-Income. The company is still owned by the Johnson family. Edward Johnson III is now the CEO. Abigail Johnson, the granddaughter of Edward C. Johnson II, and the daughter of Edward Johnson III, is the current President.

4. The Cargill/MacMillan Family – Net Worth: $43 Billion

Cargill is the largest privately-held corporation in the United States. William W. Cargill founded the company just after the Civil War, when he purchased a grain flat house. He brought his brother, Sam, into the business, and they expanded, becoming W.W. Cargill and Brother. When they expanded again, they added their brother, James. By the turn of the century, the company had expanded from grain, into lumber and elevators. Along the way, John H. McMillan, Sr., and Daniel MacMillan were brought on to work as managers for the Cargill company. John MacMillan subsequently married Edna Cargill, William Cargill's eldest daughter. After both Sam and William Cargill had passed away, the MacMillan's began running Cargill. The company has since grown to have its hands in just about everything including energy trading, livestock, crop production, health and pharmaceutical products, risk management, gas, electricity, and food production. The company remained family run until 1995, when the first non-family member took over as CEO.

In the late 1980s, the Mars Family was the richest family in America. Their wealth began with Franklin Clarence Mars, born on September 24, 1883 in Hancock, Minnesota. Franklin Mars went on to found a chocolate candy bar company called Mar-O-Bar Co. in 1920 in Minneapolis, Minnesota. Mar-O-Bar became Mars, Inc. In 1923, the company got its first major boost, when it began producing a chocolate bar created by Forrest Mars. Known as the Milky Way, the chocolate bar became an instant hit. Forrest went on to create M&Ms and Snickers. The company is now responsible for a massive number of popular candy brands, and quite a few other foodstuffs, including Skittles, Twix, Mars Bars, Combos, Uncle Ben's Rice, Wrigley gum, Dolmio Pasta Sauce, and Whiskas and Pedigree pet foods. The company is still owned by members of the Mars family, but it's no longer run by a family member.

There's not a lot of love in the Koch Family, but there's a lot of money. Brothers David H. Koch and Charles Koch maintain control of the company co-founded by their father, Fred C. Koch in 1940. After a bitter feud with their two other brothers, Frederick and William Koch, they bought out Frederick and William for $1.1 billion. The remaining two brothers own 42% of the company which has its hands in asphalt, fertilizers, pulp and paper manufacturing, ranching, mineral mining, natural gas, plastics, petroleum, energy, fibers/textiles, chemical development and production, commodities trading, and finance. The brothers are also very politically active, spending over $50 million to date lobbying in Washington either for or against policies that might affect their business dealings.

Sam Walton founded his first discount store in 1945 in Arkansas. The store was originally founded on the idea that if you sold more product, you could charge less for it. His idea eventually caught on, and in 1962, he opened the first Walmart Discount City in Rogers, Arkansas. Fast-forward to today, and Walmart is now comprised of 11,000 stores in 27 countries. It's the largest company in the world based on revenue and employs over 2 million people. While the company, and the family that still owns it, are clearly doing well, its employees are not so well off. There have been multiple strikes protesting the incredibly low wages Walmart staff members receive, including large-scale protests on Black Friday, one of the busiest shopping days of the year. Over the last five years, Walmart's employee policies have come under increasing fire, and there have been numerous calls to oust current Chairman, Rob Walton. However, the Walton family owns more than half of the company, so the chances of any of them stepping down are slim-to-none.