Chances are you've spent some time pondering creative ways to make money. Sure, you could work your butt off and advance up the career ladder, hopefully cashing in on six figure and higher salaries, and even higher bonuses. Or, you could invent Build-A-Bear. The people on this list have found some very bizarre ways to make their millions. They aren't investment bankers or actors or athletes, but they did give us ways to cheat on our spouses, goggles for our dogs, and some delicious jam.

10. Start A Website for Married People Looking For Affairs

Noel Biderman was married when he started AshleyMadison.com, the online dating website that only accepts married people as clients. The site's tagline is "Life is short. Have an affair." Biderman, a former attorney, is still happily married. The site has more than 3.2 million members, suggesting that his clients are less happily married. Noel Biderman has a net worth of $100 million.

Did you know that you could be a pioneer in poop-scooping? Matthew Osborn could never have imagined that finding a better way to pick up your dog's poop would make him a millionaire, but that is exactly what it did. Osborn opened Pet Butler in 1987 in Columbus, Ohio. At the time, he was working two full time jobs and making less than $6 per hour at both of them. He was not able to support his wife and two kids on that kind of money and was desperate to make extra income. He happened upon the fact that there were 100,000 pet dogs within 15 miles of his home. The business of picking up other people's dog poop took off slowly, but eventually Osborn had seven employees, a fleet of seven trucks to service 700 regular clients and millions in the bank.

8. A Teenager Made Jam Using His Grandmother's Recipe

Kids these days, with their new fangled recipies for jams and jellies. Wait. What? Fraser Doherty built a veritable empire using his grandmother's recopies starting when he was just 14 years old. By the time he was 16, he'd left his high school in Scotland to work on his jam business full time. SuperJam sells over 500,000 jars of jam a year and has control of about 10 percent of the UK jam market. Doherty's stake in his own company is worth somewhere between $1 and 2 million.

Eyewear for dogs may seem like a silly idea, but not for the person who thought of them first. Doggles is a million dollar business that has received press and attention from People, CNN, Regis and Kelly, Animal Planet, and more. Goggles for dogs was the company's original product and they have now expanded into other accessories for your favorite hound including t-shirts, caps, backpacks, and floatation jackets. 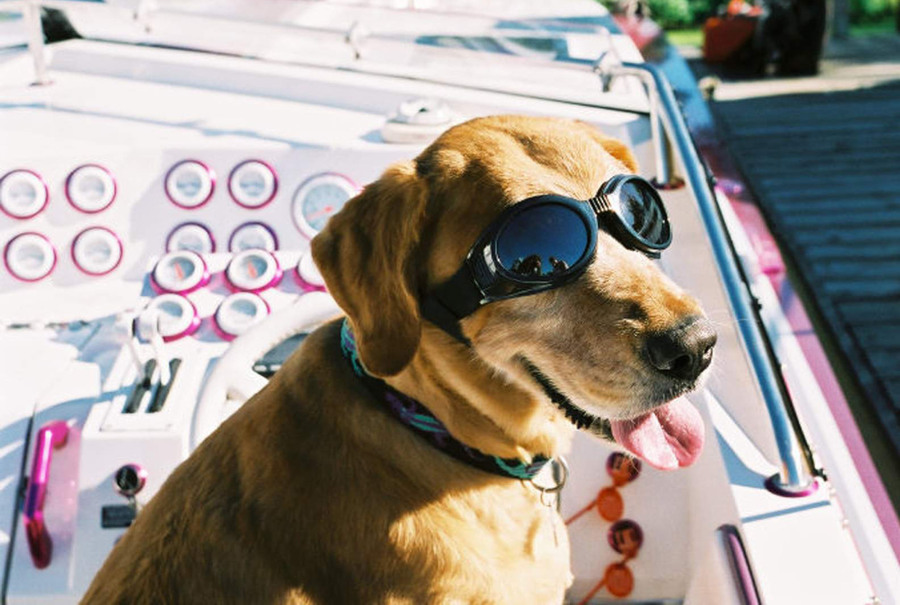 6. This Man Became A Millionaire By Inventing Plastic Wishbones

Ken Ahroni had a bone to pick with wishbones. He didn't think it was fair that only two people got the chance to make a wish at Thanksgiving, so he created the company Lucky Break, to make synthetic wishbones that felt and sounded like real dried turkey wishbones. Today, the company makes 30,000 wishbones a day. They even make custom-designed and imprinted wishbones for corporate, promotional, or personal use. Lucky Break has over $2.5 million a year in sales.

5. A Housewife Thought Putting A Pillow In The Microwave Was A Good Idea

Kim Levine invented Wuvit, little bags that provide soothing moist heat. One day she figured out that if she put some corn in cloth, sewed it together and then popped it in the microwave, a warm, soft, soothing pillow was made. She rushed to her sewing machine to cement the product and her multi-million empire was born. She started going to local retailer and crafts shows, peddling her soothing pillow. Eventually, Saks Fifth Avenue decided to carry her pillow, and another millionaire was created.

4. This Guy Sold Pixels On A Webpage For $1 Million

Back in 2005, a 21-year-old college student in England came up with a wacky idea. Alex Tew launched The Million Dollar Homepage on which he sold the pixels of a 1000×1000 grid for $1 each. This simple and strange idea took off, attracting an enormous amount of press coverage. People began buying the pixels, and in the end he made $1,037,100 in just a few months. In fact, the very last slot on the page went for $38,100.

3. Need An Excuse To Miss Work? This Guy Has A Few

Over time you may run out of valid and believable excuses for not going to school or work. Lucky for you, a company has created an excuse absence network service for U.S. customers which offers a bunch of different reasons to excuse you from work. It is called The Excused Absence Network and provides all of your excuse letter needs for just $25 per excuse. The notes can appear to come from a doctor or hospital or look like fake jury summons, or even a fake funereal program complete with poems and pallbearers. The founder started this company with just $300 and runs if off a laptop in a small town in Oklahoma. The website gets 15,000 hits a month.

2. Printer Cartridges Are These Monks' Calling

LaserMonks.com is an Internet store that sells discounted printer cartridges and other office supplies. Father Bernard McCoy is the CEO and he is a real live monk. Customers include churches and individuals as well as Morgan Stanley and the U.S. Forest Service. In 2002, LaserMonks.com had $2,000 in sales and by 2005, they were doing $2.5 million in sales. Reportedly, Father McCoy got the idea when his printer ran out of ink and he was confronted with the ridiculously high price of replacing it. In the early days, LaserMonks.com consisted of a few monks sitting around with empty cartridges and black ink powder. They were only able to fill a few orders a day that way. Today the monks claim to have served more than 50,000 customers and they fill up to 300 orders a day.

1. The High School Student Who Made $1.5 Million Offering MySpace Layouts

Ashley Qualls, a teenaged girl with some creative and coding skills, set up a website called WhateverLife to offer layouts for MySpace in 2004, when she was 14. She has since made more than $1 million dollars, and makes as much as $70,000 per month. In 2006, she paid cash for a $250,000 home in a gated community near Detroit. Qualls has turned down numerous offers to acquire her company, including one for $1.5 million.