By Amy Lamare on December 5, 2016 in Articles › Entertainment

Fidel Castro, Cuba's Communist dictator, was born on Friday the 13th, 1926. He was the illegitimate son of a wealthy farmer who developed his taste for extreme politics while studying law at the University of Havana. Castro died on November 25th at the age of 90. He was an extremely divisive world figure who governed Cuba as Prime Minister from 1959 to 1976 and as President from 1976-2008. He was the First Secretary of the Communist Party of Cuba from 1961 to 2011 and under Castro, Cuba became a socialist state. Industry and businesses were nationalized and socialist reforms were put in place throughout the society and economy. In 1953 he spent a year in prison after an unsuccessful attempt to overthrow Cuban President Fulgencio Batista. His second attempt at a coup in 1959 was successful and Castro assumed the political throne he occupied for the rest of his life. U.S. Presidents Dwight D. Eisenhower and John F. Kennedy both tried and failed to remove Castro from the Presidency of Cuba. 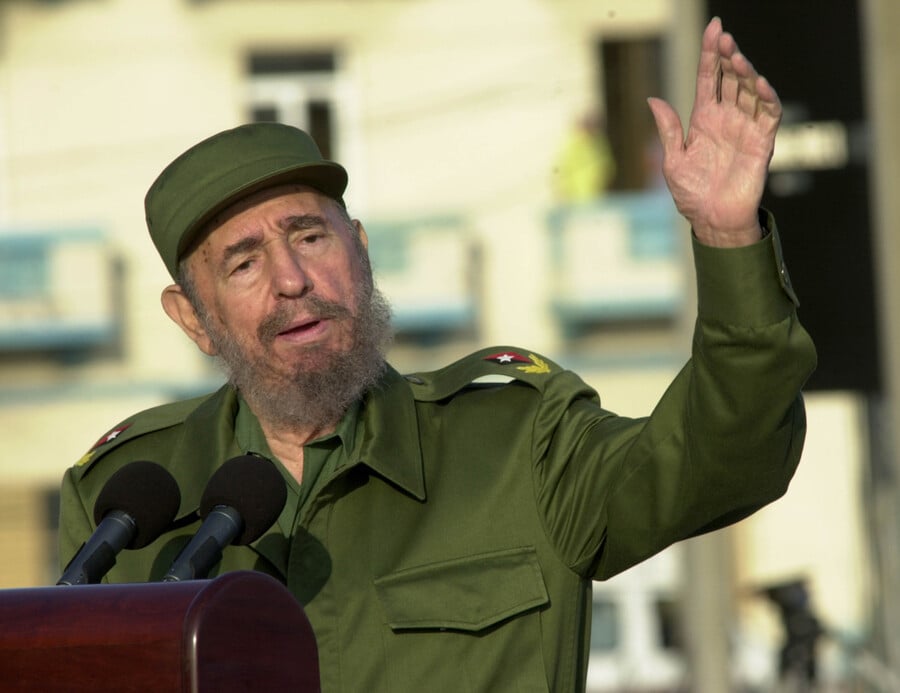 Given the overall economic conditions in communist Cuba, it might surprise you to learn that Castro lived very extravagantly and had a net worth of $900 million.

#1. Fidel and his younger brother Raul were born on their father, Ángel Castro's, prosperous sugar plantation in Birán, Cuba. Founded by their father in 1915, the home burnt down in 1954. An exact replica was built in its place in 1974. Fidel's parents, Ángel Castro and Lina Ruz González are buried at the plantation .The property is now a Castro museum.

#2. Castro comes from a very wealthy, privileged background, which is at odds with the message of frugality he touted to the citizens of Cuba, so he frequently told the story of his "exploited Galician peasant" grandparents from Spain in an attempt to be "one of the people."

#3. Fidel attended a Jesuit boarding school where he got a very good education despite his mediocre grades. As a student, young Fidel was interested in politics, reading, and baseball. When he was 14-years-old he wrote a letter to President Franklin D. Roosevelt congratulating him on his re-election. In the letter he also asked the President for a $10 bill. He had never seen one before.

#4. The Castro family plantation was not just a profitable working sugar plantation. Ángel Castro was a prominent landowner and his plantation also had a primary school, hotel, bar, post office, market, and a ring for cockfighting.

#5. Fidel Castro started wearing his trademark beard when he was a young revolutionary living in the mountains. He kept the beard for practical reasons. He once said: "If you calculate 15 minutes a day to shave, that is 5,000 minutes a year spent shaving." Castro preferred to spend his time on more important activities.

#6. One of his favorite books was Ernest Hemingway's For Whom the Bell Tolls. The story is set during the Spanish Civil War in the late 1930s.

#7. Fidel Castro married Mirta Diaz Balart, the daughter of a wealthy family with ties to the Batista regime. They had a son named Fidelito in 1949. Mirta filed for divorce while Castro was in prison when she received a letter intended for his mistress, Cuban socialist Natalia Revuelta. It is believed the prison director purposefully switched the letters.

#8. Despite being an atheist, Fidel Castro met with three popes. He met Pope John Paul II in 1998, Pope Benedict in 2012, and Pope Francis in 2015. By all accounts he looked forward to and enjoyed these meetings and exchanged religious books with the leaders of the Roman Catholic Church.

#9. There is one kosher butcher in Cuba and Castro personally allowed him to stay so that he could serve the 1,500 Jewish people.

#10. Fidel Castro ruled Cuba for 49 years. He was the third longest ruling head of state behind Queen Elizabeth and the King of Thailand. He was a notoriously paranoid person who moved frequently to outwit more than 600 assassination attempts by the CIA and other political enemies. Some of those failed plots included exploding cigars and poison milkshakes.